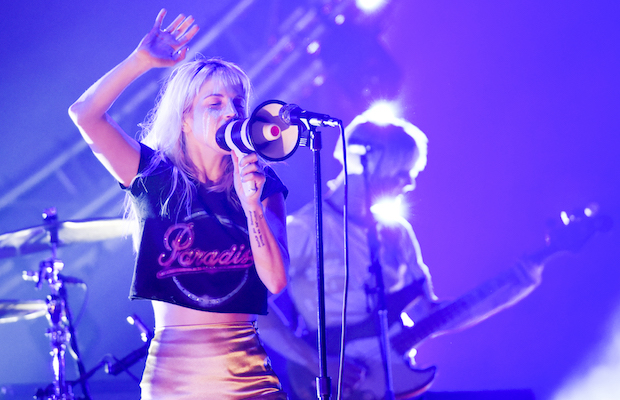 Less than six months ago, we witnessed Paramore‘s return to stage after the longest touring gap of their career, days before the release of their triumphant fifth album, After Laughter. Also the group’s live reunion with founding drummer Zac Farro, the intimate affair took place in front of a few hundred friends and fans at Exit/In, mere steps from where they played their first show ever 13 years prior, at adjacent dive The End. Though unique and inspired, and certainly a show we won’t soon forget, that performance felt more like a necessary and cathartic need to return to their roots, something of an open practice surrounded by a communal support system, before embarking on bigger, more-involved tours that have taken place since.

It seems fitting, then, that Tour Two (the North American leg of their After Laughter run, following a Tour One in Europe over the summer) would wrap back home, bigger, but still intimate by Paramore standards, in the legendary and perfectly-suited Ryman Auditorium, where the group last played in 2009 (and mind you, they’re not home for long, with festivals in Mexico and South America, winter one-offs, Florida makeup dates, and a European Tour Three all on the horizon). After recently getting a taste of part of this show outside at Chicago’s Riot Fest last month, we were eager to see the current tour from beginning to end in its full glory, and couldn’t have asked for a more magical space in which to witness it. Below, check out our full coverage and photos from Paramore’s epic homecoming!

Trekking through a fleet of trucks and buses and into The Ryman, I was relieved to find a relatively calm scene, after the insanity of Harry Styles a few weeks ago. Paramore fans are intensely passionate, to be sure- they just keep it cool- and I enjoyed checking out all of the outfits and accessories inspired by the band as the excited and buzzing crowd filed into the Mother Church. The last date of this leg, I’d seen enough photos (and even a festival version of the show) to be pretty familiar with what to expect, and I was beyond curious to see how, or if, they’d find a way to fit their massive, custom lighting rig on the stage of the 100-year-old church turned concert hall. As I settled into my seat in the balcony, passing a huge line of eager attendees hoping to snag one of two custom posters at the merch table, I was floored to discover that the gigantic circular lighting array had just squeezed in, towering about the venue in its awe-inspiring mystery (the last time I can remember being so transfixed by a dormant piece of staging ahead of a show’s start was Beyoncé’s monolith on last year’s Lemonade tour). 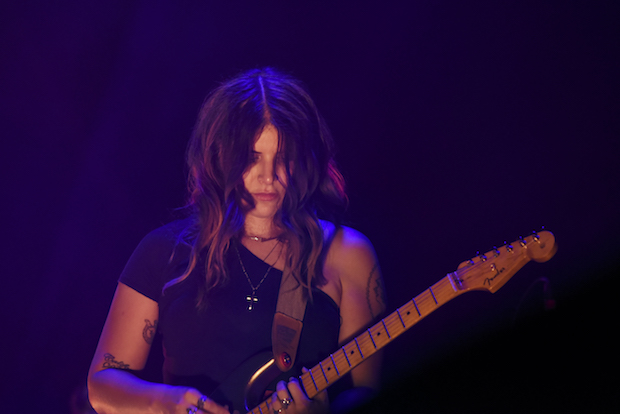 Openers Best Coast promptly took the stage, boasting, at five members, the largest live lineup I’ve seen them use (my first experience with the band was many years ago at a bar, before they’d even released an LP, then a duo plus a drummer, and they’ve gradually added backing players over the years ever since). I’ve mostly seen the LA group play smaller clubs, but I had caught them opening a couple of bigger tours in the past, so I already knew they were more than capable of commanding a room this size. As polished and confident as ever, they launched into a brisk and fun set that began with “The Only Place,” and stuck largely to their most recognizable tunes like “When I’m With You,” “Crazy for You,” and “Feeling OK.”

Singer Bethany Cosentino commands a certain air of relatable warmth and a laid back cool, and Best Coast’s breezy vibe and subdued energy felt like a perfect ramp-up to Paramore. After a heartfelt speech about acceptance and accountability, as well as a sincere thank you as the tour wound to an end, Beth invited Hayley Williams out to help sing on set closer “Boyfriend,” met with rapturous excitement and applause. A cool moment, without a doubt, the whole of Best Coast was one of my favorite performances I’ve seen them play over the years, albeit one too short, and The Ryman was a gorgeous and sonically perfect place for their style- a fact the band seemed giddy about as well. 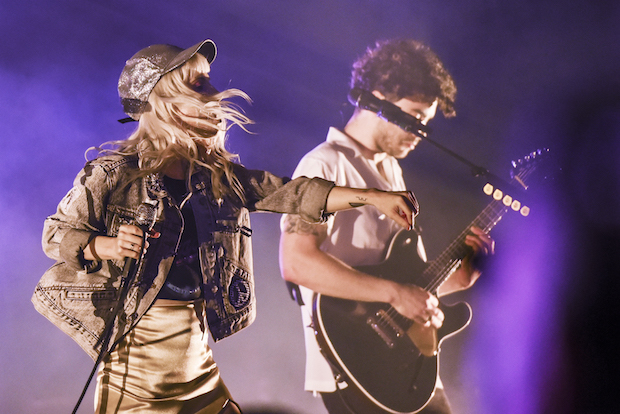 Scanning the room between sets, I spotted friends of mine and friends of the bands, as well as family, crew, tons of other Nashville musicians, and more- the venue was bigger, but the local, communal vibe of the Exit/In show was once again present. It wasn’t long before the lights dimmed, and percussive intro of “Hard Times,” the same new tune Paramore opened (and closed) with at their last Nashville show kicked in, as the room erupted to their feet in applause. The glowing, circular, trippy, and dynamic light show was breathtaking, and with its size and angle, looked a bit like a spaceship that had crash landed and beamed the band down (or a gigantic CD or the Target logo, for the less imaginative), at times even reminding me of the underside of Kanye West’s floating Saint Pablo stage when the edges washed the stage with powerful beams of light.

Exit/In was a fun primer, but after months of traversing the globe, settling into the new seven-piece lineup with the coolest array of backing players they’ve ever had, the group sounded so much more polished and huge, bringing to life new songs and old with every layer and nuance. Many of Paramore’s peers, especially ones that sprung from less rock-rooted backgrounds, employ a lot of artificial assistance on stage- samples, backing tracks, vocal tracks, etc- and while I can’t profess to know every detail of their sound setup (it’s rare for any popular band to use zero tracks), the local group seem to strive to do things as organically as possible, a refreshing and impressive feat to hear in a venue so finely acoustically sound. No real humans ever sound perfect, but to be pretty damn close is a marvel, and one of Paramore’s most impressive qualities is just how great and how real they sound live.

There’s something about this second (or third, or fourth, or however you want to count it) wind of the band that feels more uninhibited than they’ve been in years. The process leading up to After Laughter nearly ended Paramore, but despite recent personal and professional struggles and setbacks, they seem to have emerged stronger for it, and their closeness and unity as a band and as friends has never been more palpable. When you’re speaking about human beings, things are rarely just black and white, and while it would be easy and romantic to say Paramore overcame adversity and are simply happy and past their personal struggles, that’s almost surely not entirely the case; life is more complicated than that. What is clear, though, is for the hour or so they’re on that stage, they look absolutely overjoyed and in their element, genuinely fulfilled and inspired while performing earnest and sometimes sad songs in something of a cathartic shared experience with a fanbase more in-tune with their artist than just about any other I can think of. 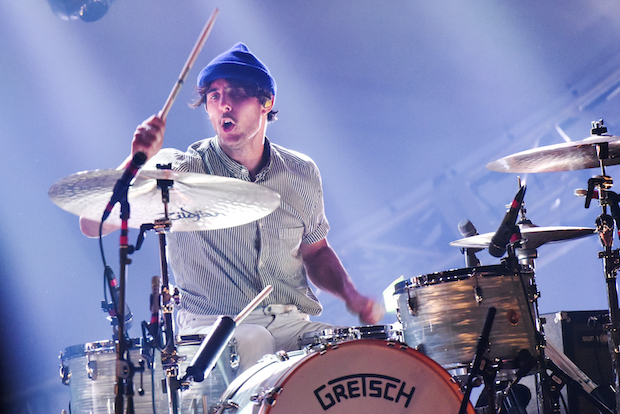 As expected, After Laughter dominated the setlist, which largely skewed on the new side in general (I was a bit surprised that no cuts from their debut All We Know Is Falling made it in, but that record does feel increasingly at odds with the direction they’ve veered in recent years). Their latest hadn’t even arrived until after the last Nashville show, so after spending the last few months giving it a ton of attention (it really is an emotional indie pop masterpiece), it almost felt like only now was I properly seeing the current version of the band. And the new songs soared, from the blissfully poppy “Forgiveness” to an acoustic rendition of the record’s most vulnerable track, “26,” to groovy single “Told You So” and perhaps my personal favorite, “Fake Happy,” interspersed with hits like “Still Into You,” “That’s What You Get,” “Hate to See Your Heart Break,” and even a very cool cover of Fleetwood Mac’s “Everywhere.”

Magnetic and humble as always, Williams paused frequently to address the hometown crowd, reminisce about the band’s history, and to put the focus on her bandmates, guitarist Taylor York and drummer Zac Farro, and backing players, guitarist Justin York, bassist Joey Howard, multi-instrumentalist Logan MacKenzie, and percussionist Joey Mullen, all local. Before introducing breakout single “Misery Business,” which helped the band find mainstream success a decade ago, Hayley took everyone on a walk down memory lane to 2007, waxing fondly of Hot Topic, Rocketown, scene hair, tight jeans, and a younger version of Paramore who never could’ve dreamed of the success they’ve since experienced, and thanking everyone who helped make it happen along the way, many of whom were in attendance, as well as the group’s amazing fans. After an inspired “Ain’t It Fun,” they emerged for an encore, featuring a cover of HalfNoise tune “Scooby’s in the Back,” sandwiched between stellar new cuts “Caught in the Middle” and “Rose-Colored Boy.” What started as a fun and informal backing spot at HalfNoise’s Lucky Bamboo release show, and was cemented as a fan obsession after the Exit/In encore, “Scooby” has become a fun staple of Paramore’s live show, allowing Zac to step upfront and the opening band to join for backup, in a groovy, dance-worthy end to the night.

I have no doubt that Paramore could have booked Municipal or Bridgestone or somewhere significantly larger as they have in the past, but something about this run, intentionally opting to be more intimate, feels like a reflection of exactly where they are overall as a band. A Grammy-winning, platinum-selling, hit-making rock and roll juggernaut, they’re inarguably one of the most famous and successful rock bands in modern history, and certainly the biggest to come from Nashville since the turn of the century. The thing is, that doesn’t seem to be all that important to them. Of course, though success and validation and career-making stability is welcomed by most any musician, Paramore started as some musically adventurous friends in a Franklin basement almost 15 years ago, and in order to find their way once more, they’ve seemingly recaptured that spark and focus on kinship and the music- the most important thing when you peel back the layers. Paramore are the best they’ve ever been because they’re being entirely true to themselves, and seeing that emotional energy and personal chemistry harnessed live is astounding and powerful. Bigger venues for future treks are probably an inevitability, but getting reacquainted with the band in intimate spaces this year has been such a fulfilling, refreshing treat. I think they would agree.