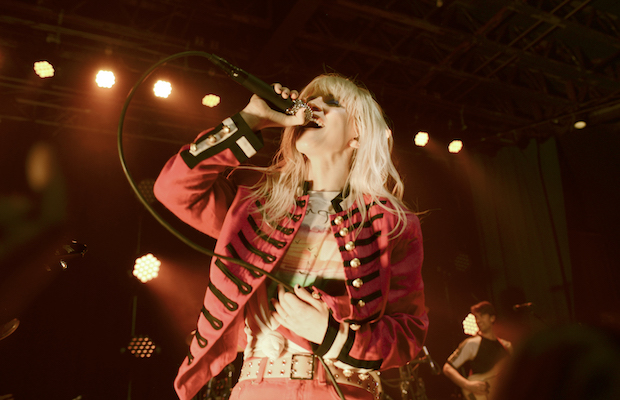 For many bands, returning to stage after a two year absence would be business as usual. For locals Paramore, who’ve never taken such a long break in their decade of touring, and whose very existence seemed briefly in question in the interim, returning to stage, as they did last night at Exit/In, was an essential step in kickstarting perhaps the most important, transformative, and liberating era of their career thus far.

A special, semi-secret hometown show, mere steps from where they played their first ever, 13 years ago at The End, the band, who just a few years ago headlined Bridgestone Arena, treated fans, friends, and family to one of the most intimate and communal performances they’ve played in at least a decade, a retrospective and celebration, not just of Paramore’s return and of the return of drummer Zac Farro, but of the many people who helped, influenced, and encouraged them along the way.

We were fortunate enough to be in attendance, and, while it sounds like you’ll all have a chance to see the group on the road very soon (including a return appearance in Nashville), you can read our account and check out a full set of photos from Paramore’s first show back, below! 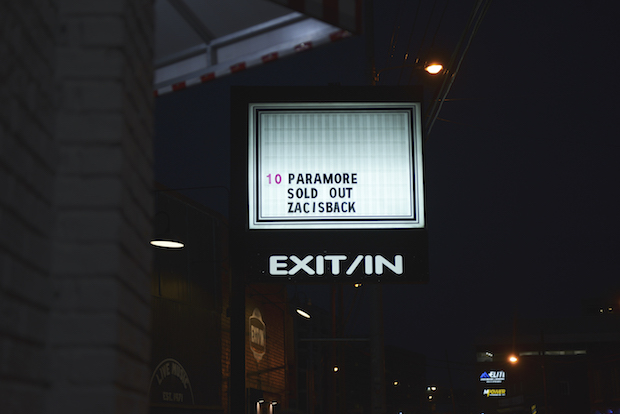 Announced via handbill last week, the band largely kept mum about the concert until hours before, simply posting a website that, at 5 a.m. yesterday, instructed fans that tickets could be purchased only in person beginning a few hours later. While perhaps not ideal for out of town diehards hoping to travel, it provided a uniquely fair system for locals and totally blocked scalpers (each ticket was a numbered wristband that could not be transferred), and I’m told tickets were available for several hours before ultimately selling out.

Greeted by a marquee that read “Paramore, Sold Out, ZacIsBack,” I entered not long after doors to find an incredibly enthusiastic crowd, filed in and anxiously awaiting, as a swath of techs prepped the stage, loaded with about as much gear I’ve ever seen at Exit/In. At the merch table, a variety of show-specifc wares- t-shirt and flyers made just for the occasion- were on full display, matching the custom wristbands and commemorative cardboard tickets being distributed on the way in. 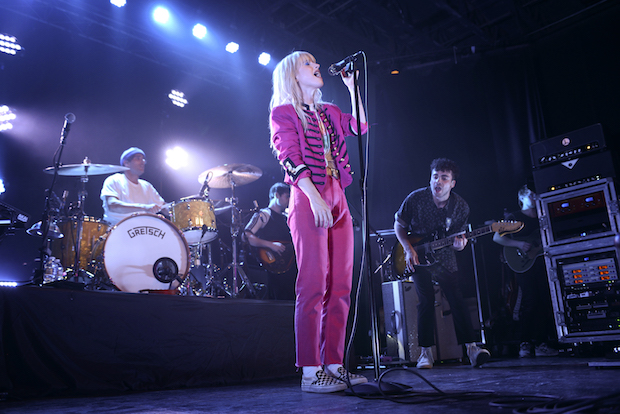 By 9 p.m., the band’s posted start, the room was swelling at capacity, a sectioned off upstairs for friends and family, and the fans crowded into the main venue. As suspected, there was no opener (as cool as a Bully or Daddy Issues set might have been, the evening’s focus was squarely on the main attraction), and Paramore took the stage just a little late, following eager chants and a few false-alarm fades from the immaculately well-selected house music.

I wondered, beforehand, if the band would make this more of a retrospective or use the opportunity to showcase their new album, After Laughter, which arrives tomorrow; while bold opener and lead new single “Hard Times” was just enough new to get longtime fans excited and salivating (especially when guitarist Taylor York contributed vocals- an apparent longtime request), pivoting immediately into “That’s What You Get,” a song literally a decade old, made clear that this would, in fact, be a celebration of Paramore’s full history- a wise and reestablishing decision.

Paramore’s choice to host something so scaled back and so word of mouth set the perfect “first show” tone, and, in a lot of ways, it was- a first show back, a first show without ex-bassist Jeremy Davis, a first show with drummer Zac Farro in over six years, a first show of the After Laughter era, a first show with the assurance that Paramore will, in fact, persevere as a band- all, fittingly, in the shadow of their literal first show so many years earlier. Around the same age as the band, I’ve managed to see them at most every stage of their career, and this performance most certainly felt like a reintroduction for fans and rediscovery for Paramore themselves; a new incarnation of the group born of time out of the spotlight and creative reinvigoration, almost entirely at home in Nashville. 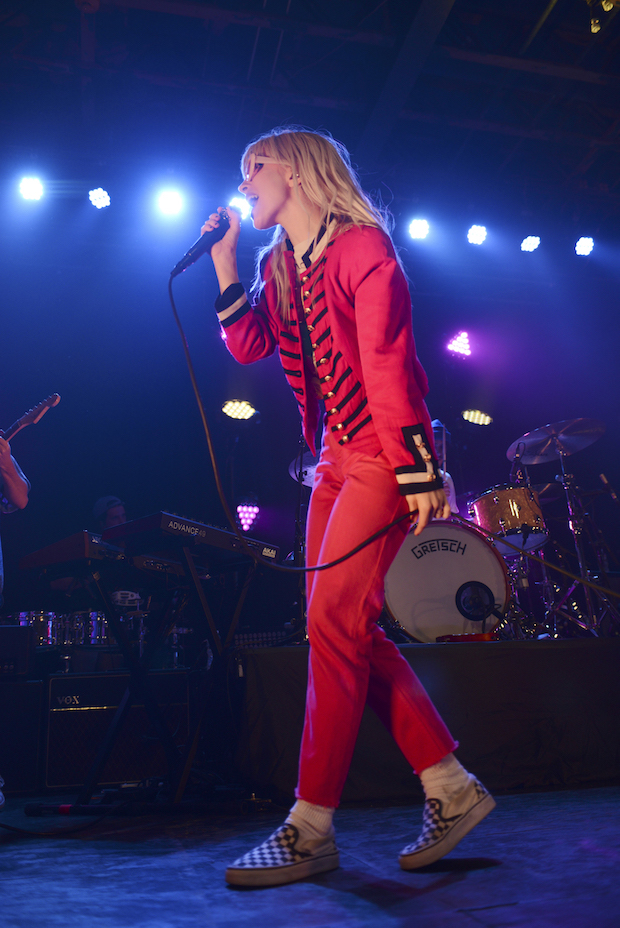 Absent only for one album, Farro didn’t miss a beat (literally) on his first time playing several cuts from the band’s self-titled release, and his presence, above all else, brought a certain dynamic, warmth, and palpable kinship that served as a reminder that Paramore are, at their core, just a band of friends from Franklin, whose Grammy-winning, arena-primed success is fueled by their grounding. If singer Hayley Williams and guitarist Taylor York, the group’s only two permeant members throughout 2016, shaped the sonic and thematic direction in which Paramore are headed, Farro surely crafted its rhythmic backbone, and though we love catching him front and center so often with HalfNoise, it was marvelous to see him back behind the drums as well.

Rounded out by a talented array of backing players- longtime live guitarist Justin York, bassist Joey Howard, multi-instrumentalist Logan MacKenzie, and additional percussionist Joey Mullen, Paramore sounded as enormous, confident, and punk-spirated as ever, largely devoid of any live tracks or added flourish, simply carried by their own immense skill. With a set spanning every album, they hit loud, huge rock songs like “Now,” more intimate tunes like “Hate to See Your Heart Break,” ranging from selections like the lesser-heard Twilight feature “I Caught Myself,” to Grammy winning megahit “Ain’t It Fun.”

With no barrier, the band and especially Williams interacted with the audience, up close and personal, throughout the entire evening, thanking fans for their unwavering support, expressing joy at Zac’s return and the general state of the group, and gushing with excitement for After Laughter. Not a far-cry from a typical Paramore show, everything was appropriately scaled to fit the room, and by virtue of the size of the affair, felt a bit like peeling back the curtain and witnessing a practice (a very, very good practice, mind you), something I always deeply enjoy. 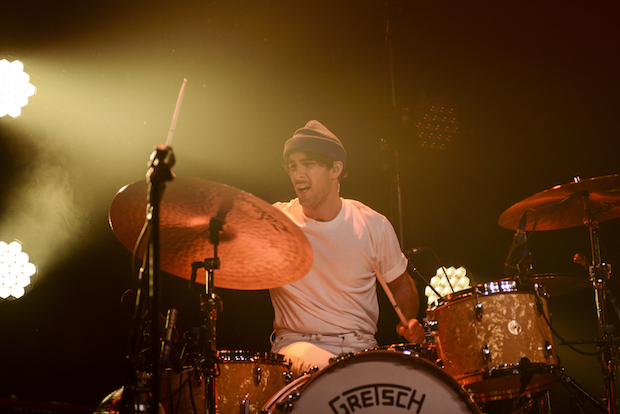 Though the set largely paid fan service, there were a few surprises. Namely, a cover of The Strokes’ classic “Someday,” which in the pantheon of Paramore cover selections from over the years, feels like a natural fit.  The bigger surprise, though, was a cover of “Scooby’s in the Back,” a recent single from Farro’s post-Paramore solo project HalfNoise, which saw Zac step to the front to kick off the encore, mirroring HalfNoise’s incredibly fun Lucky Bamboo release show just last month, where Williams and York technically first reunited with the drummer on stage, if not exactly in a formal Paramore context.

Taking another cue from the HalfNosie playbook, the band ended by unabashedly performing a song for the second time of the night- “Hard Times”- which, despite puzzled looks, had the room immediately dancing and singing along yet again, ending the night with a reminder that, despite an unbelievable walk down memory lane, there’s something new right around the corner, and this is just the prologue. A local rock institution, and one of the bands I’m most proud to claim as one of our own, Paramore’s return to stage was every bit the unpretentious, intimate, and inspiring show I hoped it would be, and, without a doubt, one I’ll never forget.

Pick up After Laughter this Friday, May 12, and expect to hear a LOT more from Paramore this year.