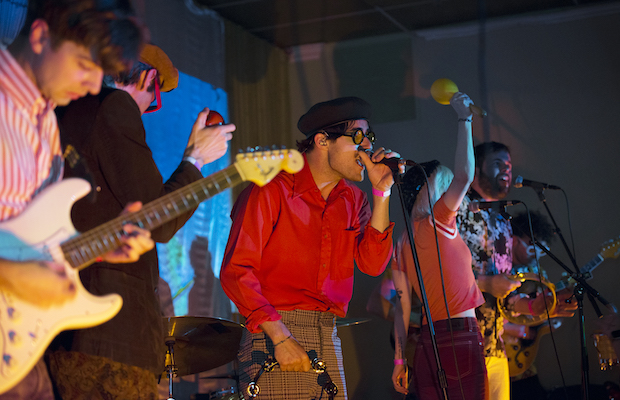 Though we’ve been covering HalfNoise, the eclectic solo project of local artist Zac Farro, for a number of years now, if you’re just joining us for the first time, here’s a primer- Not long after first departing Paramore in late 2010, Farro, then only 20, began experimenting with music under the HalfNoise moniker, releasing a self-titled, debut EP in 2012. Two full-lengths and another EP, the brand new effort The Velvet Face, since, and HalfNoise has run the gamut of Sigur Ros-esque ambient rock, synthy, Tame Impala-esque indie, and, more recently, groovy retro rock, all the while organically building a following and touring the states and abroad, as Zac settled into a very focused, personal, and self-realized artistry as a frontman and driving creative force, a feat few drummers have managed.

Though he did recently rejoin Paramore, Farro is keeping HalfNoise going full force, and, before his schedule inevitably gets a lot busier with his other band, he celebrated The Velvet Face‘s release with an insanely cool hometown show at Lucky Bamboo– yes, the Chinese restaurant- over the weekend with Skyway Man. As hip, surreal, and vibey as expected, it was, without a doubt, our favorite HalfNoise show of the many we’ve witnessed over the years, and, sure, some very special guests showed up to make the night all the more memorable, but Farro was, without a doubt, the star. Below, check out our recap and photos, and, if you haven’t yet, be sure to pick up a copy of The Velvet Face, or stream it on your platform of choice!

From the moment HalfNoise announced that he’d be hosting his EP release at Lucky Bamboo- arguably Nashville’s best Chinese restaurant, though not in any way a typical concert venue- I knew we were in for a treat, and “treats” turned out to be the de facto theme of the night. Mostly closed to the public (a sign on the door read take out was still welcome), the restaurant’s decor blended with the PA, projector, and sound system that had been carted in to morph the sizable karaoke stage into a proper performance space unlike any other in town. As fans piled in to the $5 show, they were greeted by a buffet, a cheap beer station, and a mix of restaurant tables (koi pond in the center, no less) and standing space, forcing a sort of communal mingling of a crowd of familiar faces and shared acquaintances. Before the show started, music was being provided, spun on vinyl (naturally), by Josh Elrod. Though a sort of mystified and excited look permeated the room, at the sheer spectacle and surprise of the whole affair- something uncommon in a town that’s seen it all- the excitement of the show to come certainly had everyone abuzz. 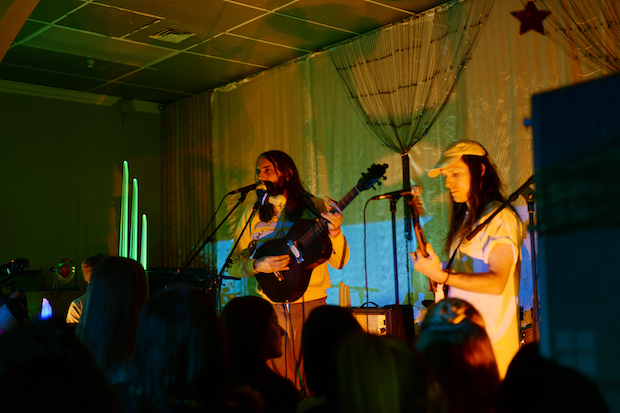 Skyway Man, a friend of the site, took the stage first. The new(ish) project from James Wallace (of & The Naked Light fame), I was excited to finally see Wallace showcase these new tunes with a full backing band, after listening to and hyping them up for a lot of months. Recorded at Richmond, VA’s Spacebomb Studios (the spot that captured the fantastic debuts of both Natalie Prass and Julien Baker), Skyway Man’s recent debut, Seen Comin’ From a Mighty Eye, is a tour de force, and live, every nuance of folk, psychedelia, and post-futurism, painstakingly recreated, was gorgeous and hypnotic. Perfectly set to trippy swaths of color projected over top of the band, the group brought the right balance of groove, energy, and eclecticism to warm up the room and win over fans of HalfNoise’s similarly layered and commanding presence. 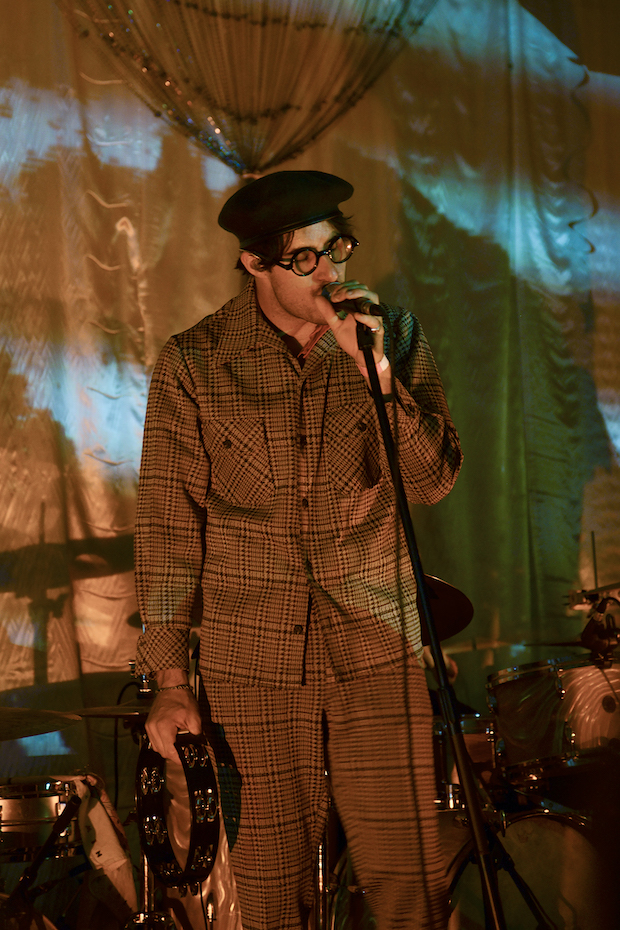 As the night dragged on and the room packed in, HalfNoise’s staging alone tipped me off that this would be the biggest version of the band I’d ever seen (Farro has performed with anywhere from just a few backing players to a full-on, fleshed out band, and the latter is what we got for this show). Though the project has always had a distinctive visual style, starting with last year’s Sudden Feeling and especially with The Velvet Face, this cohesive throughway has intensified, with everything from photos to videos to Farro’s own wardrobe carefully crafted to channel a Wes Anderson-esque, retro, quirky, French-inspired, and hip visual identity.

In a tweed suit, beret, and tinted glasses, Farro and co. began the night with a mix of cuts from nearly all of HalfNoise’s prior releases, the flourishing synths and strings and percussion accenting the wide range of sonic territory the band has explored. Embodying an almost larger than life character, the IRL version of his visual creation (let’s call him Bodega Jonez), it really stuck me just how confident and fluid Zac, who I’ve gotten to know over the past couple of years, has become as a frontman. Between sips of champagne, sincere and nonstop thank yous to the many friends, family, and fans in attendance, jokes, and the frequent promise of more “treats,” the show felt like an outlet not just to celebrate his new EP, but also as simply an excuse to bring together the local musical community he’s become such an integral part of; a sort of homecoming, house party for a project that’s become increasingly more international, but is wholly a Nashville creation. 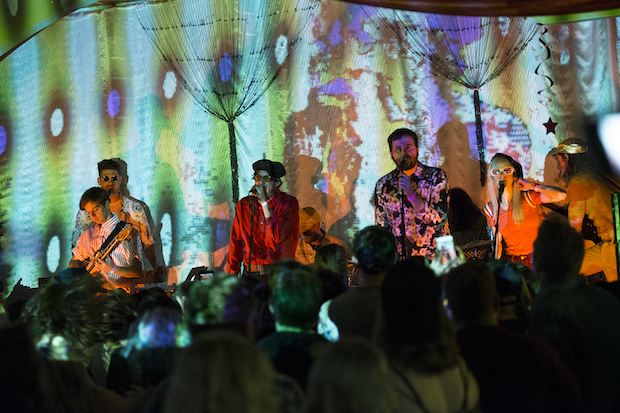 After the show’s first act, something of a “greatest hits” portion for those who’ve been with HalfNoise from the start, with honed musicianship and even a few moments of the frontman stepping back to play drums, Farro invited Paramore bandmate Hayley Williams, who’d been enthusiastically singing and dancing from the side, on stage for a surprise, stripped down performance of Radiohead’s “House of Cards.” As the band returned to stage, its numbers swelled to ten backing players, including Farro’s other Paramore cohort, Taylor York, and frequent producer and collaborator Daniel James (of Canon Blue), while Williams stuck around to assist with vocals, percussion, and palpable enthusiasm, as the set morphed into a sort of a giant dance party 0f grooves and vibes for a performance of The Velvet Face in its entirety.

Unlike anything else HalfNoise has released, the latest crop of songs capture a sort of ’60s psychedelia, and cuts like the entrancing “Scooby’s in the Back,” which sounds like it could be the B-side from an early George Harrison album, and “French Class” (both played during the set, then again as an encore), which, though also retro, channels modern psych-popsters Tame Impala, came across live better than anything else to date, feeling like Farro has lowered his inhibitions and just let the band be as fun as possible (at one point he even said something to the effect of “I don’t know if this is good, but I know that’s it’s fun”). Surrounded by his collaborators (some musical, some visual), this show, of the half dozen or so I’ve seen over the past four years, felt more like Zac fully embodying his art than ever before, and the fun, humble, and musically transcendent spirit of the performance made for one of the most memorable Nashville nights I’ve ever had.

Sure, it was cool to see Paramore on stage together (for the first time with Farro in six years, at the first HalfNoise show since he was officially announced to rejoin the band), but this night was undoubtedly about HalfNoise, and Farro, the multi-talented artist that he is, couldn’t be more deserving of the praise and attention his solo output has achieved. Be excited that Zac’s back in Paramore, but be just as excited that he’s still making music and playing shows just like this one.