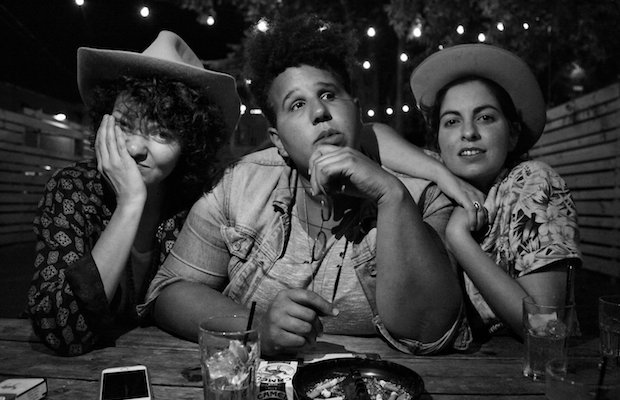 The secret is out. Alabama Shakes’ Brittany Howard has teamed up with Jesse Lafser and Becca Mancari to form a new supergroup called Bermuda Triangle. They’ll make their on-stage debut Wednesday, July 12 at The Basement East in support of She Shreds, a magazine that showcases amazing female guitarists and bassists. Although details about the newly-formed trio are sparse, the night will kick off with an opening solo set from Becca Mancari and Liz Cooper & The Stampede. Tickets are completely sold out, but we’re giving away a pair of tickets to one lucky fan! Check out all the details and enter for your chance to win below.

Little is known about new local group Bermuda Triangle other than its lineup- Brittany Howard, Jesse Lafser, and Becca Mancari- and a few quotess supplied to NPR which read as intentionally vague. Seemingly a departure from Lafser and Mancari’s folk and Americana bent as accomplished singer-songwriters, and Howard’s as frontwoman of Grammy winning blues rock outfit Alabama Shakes, Brittany describes the new band’s sound as “sad dance hall music” and Becca says it’ll be characterized by “drum machines, heavy harmonies and someone on a standup bass,” and from some Instagram teases, Howard appears to be experimenting with keyboards. Oh, and we’re instructed to “wear your favorite Hawaiian shirt, it’s important.” It’s unclear what the future for Bermuda Triangle may be beyond this show, as it’s being pegged a a project purely for the pursuit of fun, though one its members seem enthusiastic about. It is worth noting though, that Brittany’s previous, infrequent but insanely cool side project Thunderbitch did ultimately end up cranking out an album, so there’s definitely help for a more formal introduction to Bermuda Triangle beyond their inaugural show- either way, it’ll be a night to remember.

Local singer-songwriter Becca Mancari knows how to mix clever, engaging lyrics with a sound that mixes ’60s folk, the edgier side of country and and a dash of ’70s psychedelia. You’ve probably heard her infectious single “Summertime Mama,” which has earned plenty of spins on local stations like Lightning 100. Over the last couple of years, she’s honed in on her impressive live sets, which include stints opening for Hurray for the Riff Raff and Margo Price. Some of her standout tracks include “Golden,” which features glittering harmonies from her bandmates, and her live cover of Crosby, Stills, Nash & Young’s ever-timely tune “Ohio.” If you haven’t yet seen her hit the stage, get there early and prepare to be amazed.

We’ve been raving about Liz Cooper & The Stampede for years now and even tapped them for our Acme Feed & Seed showcase almost a year and a half ago. They dropped their latest EP, Live At The Silent Planet, last year and recently earned national attention after NPR Music showcased their entry to this year’s Tiny Desk Contest. They supply a dreamy mix of psych rhythms from drummer Ky Baker, sweeping guitar from Grant Prettyman, and Cooper’s own guitar work coupled with gritty, soulful vocals. We’re hoping for a full-length project to drop soon, but make sure to snag the chance to see them kick off this night of incredible music.

Winner will be announced Thursday, July 6 at 12 p.m. CDT, and will receive one pair of tickets. Good luck!

Bermuda Triangle, Becca Mancari, and Liz Cooper & The Stampede will perform Wednesday, July 12 at The Basement East. The show is 18+, begins at 8 p.m. (doors at 7 p.m.), and tickets are now sold out.