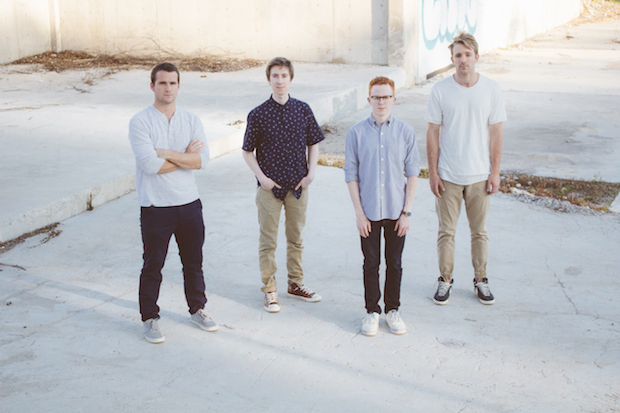 Pop music and fast whips go way back. From the Knight Rider theme’s New Wave futurism to yet another Fast and Furious soundtrack, we can’t help but pair chrome with hooks. Nashville indie pop band JOCKS comes off the block strong with debut single and music video “Spotlight.” We have the song and music video premiering exclusively here at No Country for New Nashville ahead of its release date on Friday.

Ultra smooth vocals, ’80s guitar shreddage, and a gnarly saxophone solo crank up the mood on “Spotlight” to maximum wattage. Recorded with Ben Shive of Colony House, “Spotlight” should grab the attention of anybody who loves COIN, PHANGS or The 1975. Vocalist Barrett Jacques says, “We just wanted to write a banging pop song like all of our eighties heroes: Lionel Richie, Michael Jackson, Phil Collins, Duran Duran. Not saying we really came close to doing something as good as them, but, hey, we tried.”

The “Spotlight” video is a slightly tongue-in-cheek ode to the ’80s that features Jacques falling in love with a red Buick Reatta. Nashville summer mainstays like Bobbie’s Dairy Dip and Fox’s Donut Den set the scene for an all-night ride in the city. Elaborating on the playful, cheeky mood they created, Jacques says, “We wanted the video to have that throw back feel as well. We’d used my buddy’s 1990 Buick Reatta for a joke photo shoot about a year back and thought, ‘Hey, those lights are pretty cool.’ So we stayed up all night shooting the video and just driving around town looking for cool spots. We knew we wanted it to be a love story between man and car, but we had a hard time making it work until we figured out the car wash. Once we got that scene we just had to wake up four more times to shoot the sunrise… all to get the lighting just right.”