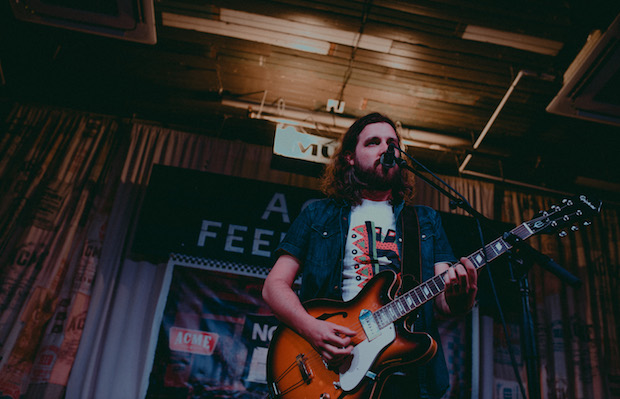 Our long-running, free, bi-monthly Acme Feed & Seed showcase series was full of familiar faces April 11, as we checked back in with two bands we’d hosted before. Back for seconds were pure rock and rollers BRUNS, and pop punk flavored collective Easy Roscoe, plus we kicked the night off with a live DJ set care of Acme Radio. Read on for a full recap of all the action, and check out some great shots from contributing photographer Nolan Knight.

An early preview of summer had washed over Music City, as I happily wore shorts on my stroll to Acme for the usual hijinks. Thirsty and surprising a little sweaty, the first Little Harpeth Chicken Scratch pils went down with ease, and I was ordering another before I’d even gotten settled into a set. No doubt the weather had something to do with it, but it was the largest crowd I’d seen for our showcase since we rang in the new year. 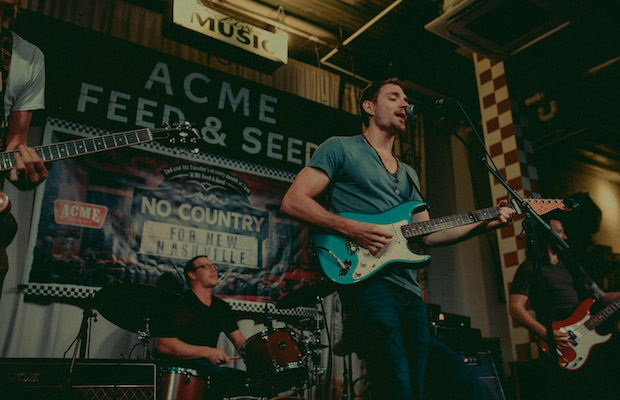 Kicking things off with a bang, local poppy, party punks Easy Roscoe wasted no time getting into their fast and furious set. With an energetic vibe that blends into more funky grooves at times, the resident four piece aren’t so easily defined by just one genre. We were so impressed the first time we hosted them at Acme, we couldn’t wait to have them back. They were playing even tighter than before, and it was obvious that their live show is only improving as they build on a very strong foundation. The large crowd seemed to match their up-beat energy, and it was obvious they’d snagged some new fans from the out-of-towner demographic. Although all their music has a way of reeling you in, I throughly enjoyed hearing their latest track, “Empty Handed,” live. If these guys continue to put in the same level of hard work they have been, then larger and larger venues are sure to follow. So catch them locally while you can, because a new record and tour are surely on the way. 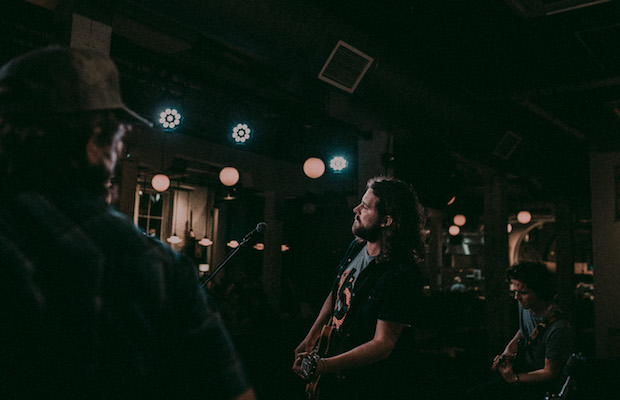 After a short break, and some more beers, it was BRUNS‘ turn to show us what they’d been working on since the last time we saw them perform in person. They came out of the gate on fire, with a track called “Warpaint” that has been burning up the local airwaves. A couple songs later, I came to the conclusion that these guys bring the pure, no frills rock and roll; the type the blue collar man loves (myself included). Heavy Bruce Springsteen vibes, although frontman Tim Bruns sings very differently than The Boss. Tim’s singing is a little bit more effortless, and never strained. His music just has that Springsteen flavor, all be it a little bit more hard rock than what the E Street Band was packing. Kings of Leon arrangements came to mind as well. They also showed some range on “Am I Good,” when they slid into a blues/r&b sound. He was also good for some cheap laughs with his lyrics on the track “Money,” personifying currency as a “son of a bitch.” Not too long after that, they’d blazed their way into the sunset, riding away on their rock and roll horses, leaving the still lingering crowd begging for more. However, it was time to call it quits, so we’d have to wait another two weeks before we’d be back at Acme for another throw down, but while you’re here, be sure to enjoy the photos taken by contributor Nolan Knight.