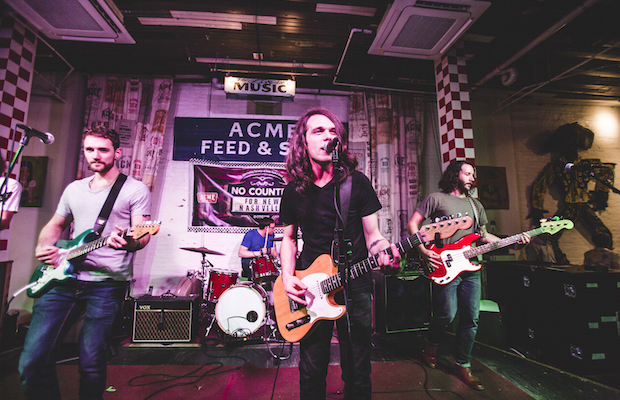 The cold spring trend was going strong when we were winding March at Acme. We walked double time down first avenue towards our destination, eager to warm up a little and drink a pint. Adding to our anticipation was the strong lineup that awaited us. 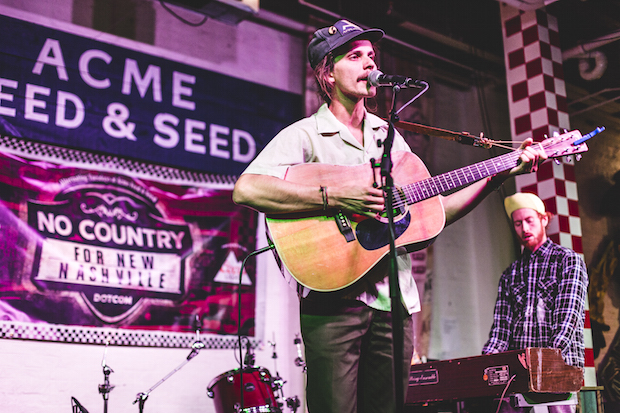 First up was Andy Ferro, a psych/folk songwriter and performer who also hangs his hat as a member of longtime site favorite Ranch Ghost. More simplistic than his work with RG, Ferro’s solo music reminded us a little of late Pink Floyd founder (and later solo artist) Syd Barrett. For the uninitiated, Syd, and Andy for the sake of this writeup, have a psychedelic falsetto tone, singing spaced out lyrics that have a sing-songy catchiness that left us feeling like we could sing along, even though we weren’t super familiar with his solo body of work. He had a keyboardist with him, which added to the ambiance of his acoustic guitar and harmonica. Sometimes the guy on keys would play guitar too, rounding out the unique and pleasing sound Andy was creating. By the end, we knew we’d love the new solo EP, Muirhead, and we also look forward to what new tricks Ranch Ghost have up their sleeves. 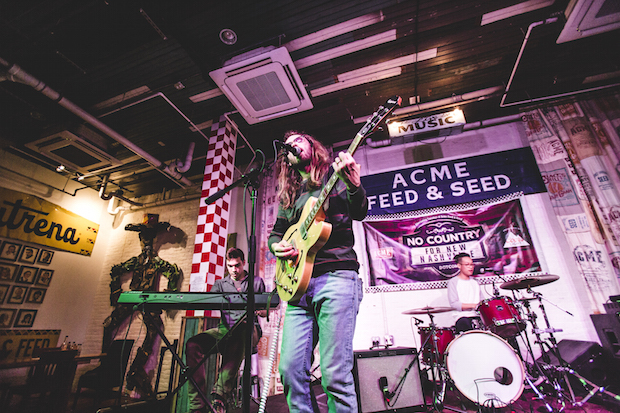 As longtime fans of garage rock blues trio That’s My Kid, we were very excited to finally have them play our Acme showcase. The first thing we noticed was an added keyboard player, which we think broadens their sound beautifully, without taking away their grittiness, which we have loved from the beginning. They remind us of the best grunge from the ‘90s, but with a new wave indie sensibility–sounding something like Weezer might if they’d first released the Blue Album in 2014, instead of 1994. They rocked through some new songs I’d never heard before returning to some gems from their latest EP, TMK, like “All I Want Is You”,  and the closer “Come Over.” Always strong live performers, it is obvious that they are only improving, and after speaking with them at Acme we’ve learned they’re back in the the studio, so look for more new music from them soon! 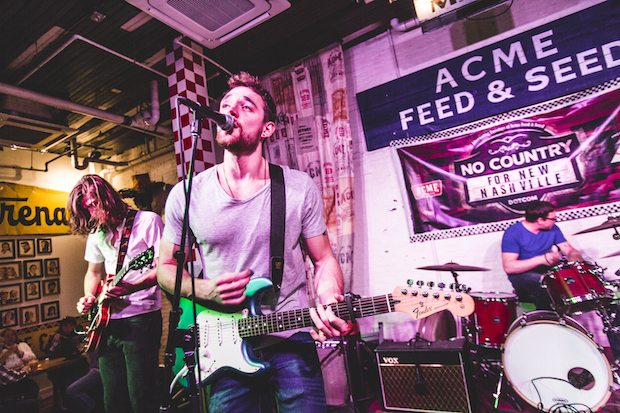 Last up were the big, big sounds from Easy Roscoe. With a setlist full of party rock anthems like “Alright; Regina,” it was a must that they close out the showcase, for fear that the more tepid tourists (just there for fried chicken) might be scared off. From the jump, they were full of energy and  bounded around stage, engaging the crowd, which seemed to be pretty full of loyal ER fans. An especially vocal/active group of younger female fans pushed tables aside to dance together closer to the stage. Based on the reactions of audience members, these guys definitely have the vibe of a band on verge, with every song seeming to go bigger than the last, each supplying radio ready hooks. They mentioned a new record was the works for them as well, and closed with yet another banger that seemed to leave the crowd in near hysterics. They even got the very rare Acme encore (since it’s usually very strict start/stop times), and jammed out a number that seemed mostly impromptu, to all of our delight.

And with that, another March was in the books from No Country Presents partnership with Acme, but I assure you we will still be going strong into April. Be there next Tuesday, April 12 when we welcome Brandon Watson, BRUNS, and Kellen of Troy to the Acme stage to entertain all you music fans and Music City tourists out there!