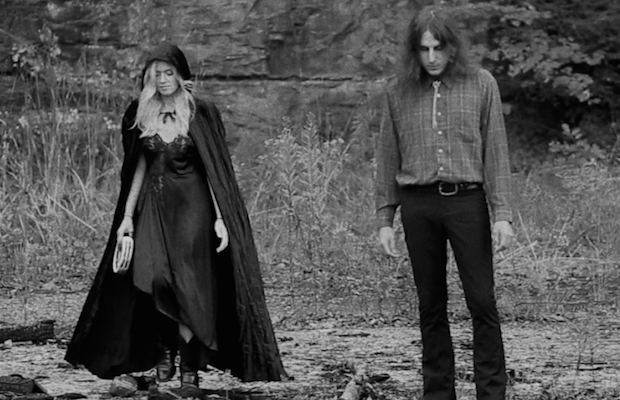 After thoroughly enjoying them during an installment of our No Country Presents showcase at Acme last summer, we’ve been following local psych/Americana rockers Lasso Spells intently (we even helped them release their first ever music video late last year). Over casual beers, we recently chatted with Brett Dudash, one half of the nucleus of Lasso Spells, about the show his band is curating tonight at Mercy Lounge. They’re calling the event “High Noon”, and it will feature five other local groups we dig, like Lawndry, The Jag, Okey Dokey, The Minks and Black Venus. In a genuine effort to get as many of you there as possible, they’ve managed to keep the entry at a ridiculously low $3, so make sure you check it out! To learn more about the format–which will also feature a DJ between sets and some killer psych inspired lights–read on for a full interview, and we hope to see you at Mercy tonight.

No Country: Thanks for inviting us over for beers! It’s very chill out here in Whites Creek. Tell us a little bit about how the idea for High Noon got started.

Brett Dudash: Thanks man, we like it out here. Well basically some people I know from Mercy Lounge mentioned to me that they would love for somebody to put on a event, like by an artist. An event put on by people in the scene, not just promo people, or people attached directly to what’s going on at the venue. There tend to be so many separate scenes and cliques, and so many bands get booking agents, and then they don’t play anywhere (locally) because nothing’s “good enough”, or they’re all just vying for the big spot. I’ve personally been in that position before (before Lasso Spells, Brett performed with well received local act Ranch Ghost). You kind of start to lose sight of what we’re all trying to do. All everybody wants is for it to be a really cool night, and for them to be able to do what they do.

NC: Sometimes it seems like a lot gets lost in the wash here in Nashville, there’s just so much going on all the time. How do you make an event stand out? How do you keep it fresh, and keep it form being boring? Do you think the typical venue format of three bands up, 45 mins each, good night, go home, is part of the problem?

BD: You’re so right. So often in this town, because there is so much going on, and it’s so fast paced, and it’s just a given that somebody gets on stage, they play their little set, and they go. They usually don’t stick around for the other bands, or bands are loading in when they’re performing. There’s just a disconnect. Sometimes if it’s really great, it shines through, and people latch on to it. But often, it just kind of gets written off. It’s the easiest town I’ve ever been to to just write things off. Because of all that, booking a show has, personally for me, been the most stressful thing, because I hate living with the fact I’m doing something that’s just so status quo. Like I love going to shows where I see lights, because the experience of the music is amazing, but it can be more. It’s even more amazing how much the experience can be taken down a notch if it’s in a bad environment.

NC: You mentioned that you’re hosting a light show of your own during the showcase. Can you explain a little more about that?

BD: Yes! We are very excited about that. My friends started a light company called Silver Cord Cinema, maybe a week before I talked to my friend at Mercy Lounge, and they’re doing amazing stuff. They’re creating the whole ‘60s, Pink Floyd analog oil light thing. They have three massive projectors, that have oil on plates, which creates the image they’re projecting. But on top of that, they have these shapes and images, manipulating the film so it’s all kind of like moving together. It’s awesome! And they’re doing the projections the entire night, so before people even get there, we’ll have the place lit up. It’ll be a light show the entire time, not just for one or two bands. It’s just something to create a vibe, a feeling, something different.

NC: How about the name of the event, High Noon, where did that idea come from?

BD: Danielle (Shoda), my girlfriend and main creative partner with Lasso Spells, she came up with the name, like high noon being the peak of the day. And me being the literal freak that I am was like ‘I don’t want everybody to think it’s at noon! Like it’s a day show’, and she encouraged me to think bigger than that. It also has the gun fighter, Western kinda feel to it, which plays to our name, but ultimately it’s supposed to be High Noon; the precipice of the day. It’s supposed to be the event of the day, with all the music going on. I mean there’s six bands, five songs each, because I want to create a cool environment and encourage everyone to hang out. We’re going to have Andy Ferro, of Ranch Ghost, he’ll be spinning records in-between acts. He has a really eclectic, really awesome record collection.

NC: That should be sweet. Talk a little bit about the line-up.

BD: We have Black Venus, really freaky cool two-piece. Lawndry, which, in my opinion, has this really awesome kind of British, psychedelic shoe gaze kind of stuff. The Minks bring a very cool American blues, but with a very sexy, tough garage female vocal. Okey Dokey, we played a show with them and have gotten to know them pretty well, but their singles are so good that we took note when we saw them create that sound live. So, I had to have them on there. We love The Jag too, they bring the party.

NC: Awesome. Well Thanks for your time, and we look forward to catching all the tunes at Mercy Lounge on Friday!

Lasso Spells, The Jag, Lawndry, Okey Dokey, The Minks, and Black Venus will all be performing tonight, Friday July 22 at Mercy Lounge. Doors for this 18+ show open at 7:30 pm (music starts at 8:30) and tickets are available for just $3.