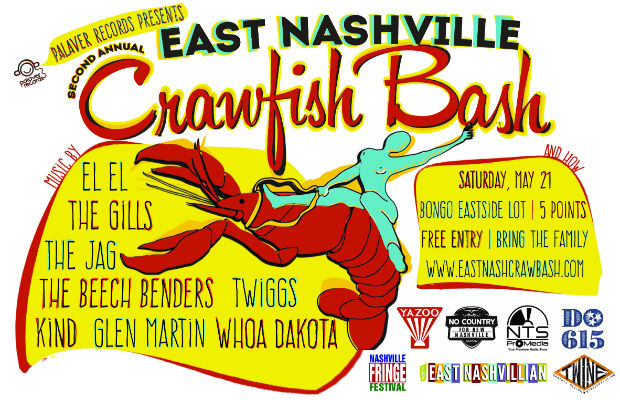 As we’ve been buzzing about for weeks, this Saturday, May 21 we’re partnering up with our friends over at Palaver Records to bring you the second annual East Nashville Crawfish Bash, a free day-long event with crawfish, beer, and music from some of our favorite local bands. This year ELEL, The Gills, The JAG, Twiggs, The Beech Benders, KiND, Glen Martin, and Whoa Dakota are the acts that will be playing starting at 11 a.m. in the grassy lot next to Bongo Java in Five Points. Crawfish will be provided by Sehrt Seafood and beer will come from Yazoo Brewery.

While the event itself is free, VIP passes are available that get you a pound of crawfish, $1 off beer all day, and either a commemorative koozie or t-shirt for $10 or $30 respectively. Snag one of those for the full experience, and read on to find out more about the lineup!

Indie pop band ELEL are prepping their debut full-length record Geode to be released this summer, and if the success of their already released singles and EP is any indication, this could be a monster summer for the talented Nashville stars. We’ve been raving about them for forever, so, if you are somehow still in the dark, get familiar below.

Alt rock band The Gills just released their self-titled debut full-length record this spring. Their new material is grittier than their previous pop rock sound heard on 2012’s Motor Running. They also took hilarious advantage of the fact that their single “Lemonade” was unfortunately released on the same day that Beyonce’s album of the same title was surprise-released by making a parody trailer for their own video.

Blues-rock group TWIGGS have been on our radar for awhile, having played one of our Acme showcases and been covered by us consistently since their 2013 self-titled album was released. Their 2015 followup continues to spotlight their firm grasp on bluesy Americana-rock infused with a tinge of grunge and haunting male/female harmonies.

Electropop band KiND started out as a side project, but we’re convinced that they’ll turn into much more than that based on the reception of their first album Eunoia and their killer live show.  Check out the video for their single “Gloss” that we premiered last summer below to get a taste.

Bluesy singer Whoa Dakota has taken on a more poppy, electronic sound in her recent music with the release of her new EP I’m a Liar last year. We’ve been talking about her for awhile, and she wowed us with her live performance at Acme last year, so if you haven’t heard her new stuff, take a listen to the single “Banshee” below.

The East Nashville Crawfish Bash will happen Saturday, May 21 at the grassy lot next to Bongo Java in Five Points. The show is free, all ages, and begins at 11 a.m. VIP passes are also available for purchase for $10 and $30.