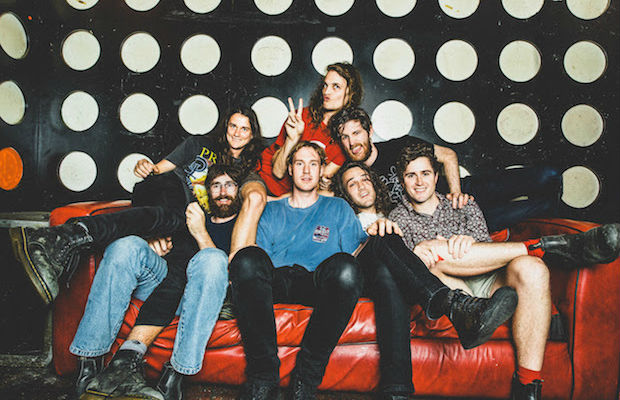 This one has been circled on our calendars for a while, and now the day is finally here! Music City please welcome Aussie psych rock ensemble King Gizzard & The Lizard Wizard, who are going to be melting faces at Mercy Lounge tonight, May 4. Music for the 18+ performance starts at 8 p.m. (doors at 7), and tickets are still available for just $12. Local (via Bowling Green, KY) rockers Buffalo Rodeo will kick things off and The Murlocs are filling the middle timeslot. That’s three great bands for under fifteen bucks. You should be buying a ticket now, if you haven’t already, but, if you’re still not sure, read on for more info on the bands.

A blog favorite at Bonnaroo 2015, King Gizzard & The Lizard Wizard are a force of nature on stage. With seven performers switching off duties, at any given time a song may feature two drummers, three guitarists, harmonica, bass, keys and an array of effects via pedals and synths. Combining their talents, KGLW take listeners on a psychedelic sonic journey, rocking through the garages and basements of the cosmos. What started as a joke project in their native  Melbourne, Australia while members were not exploring other musical avenues, King Gizzard began to build a large fan base in The Land Down Under, and now their insane live set is taking hold abroad. Following what seems to be their trend, the band’s put out a second record in the last twelve months. Nonagon Infinity dropped just last Friday, and we can’t wait to see some of it performed live. Sample it below, and don’t miss one of our most highly anticipated shows of the year!

Labelmates at Flightless Records, and countrymen of King Gizzard (Ambrose Kenny-Smith also plays in both bands), The Murlocs’ demented dance party is what would happen if soulful RnB performers dabbled with elements of psychedelia on the regular. Their distortion rich sound complements the headliners perfectly, while still being unique enough to stand apart. Their latest release, Young Blindness, is a must listen for fans of the ever expanding Australian psych movement (see also Tame Impala), and we look forward to seeing what they’re like live.

No Country Presents alum, and longtime site favorites, Buffalo Rodeo hail from the growing Bowling Green, KY music scene, which bands like Cage The Elephant have put on the map. Their sound is a more pop-centric version of psychedelic rock, with an indie rock twist. Long standing as the go-to local opener whenever a national touring psych act is in need of services rendered, we couldn’t be happier to see BR added to this bill. Enjoy some of their latest below and don’t miss their set.

King Gizzard & The Lizard Wizard, The Murlocs, and Buffalo Rodeo will be performing tonight, May 4 at Mercy Lounge. The show is 18+, begins at 8 p.m. (doors at 7 p.m.), and tickets are available for $12.