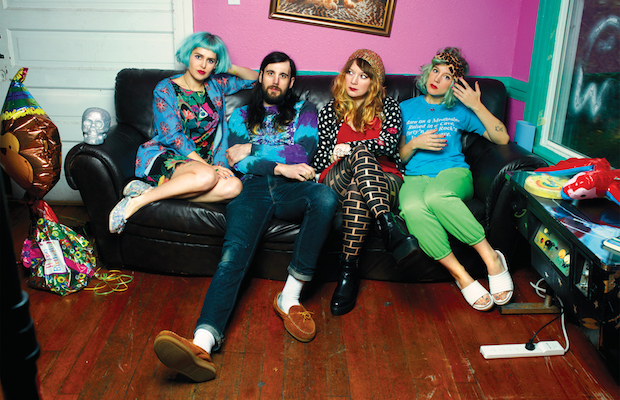 Originally announced to take place at The Stone Fox before its abrupt closure back in January, feminist poppy, punk outfit Tacocat return to town tonight, April 21 along with fellow Seattle group Boyfriends and locals Big Surr to play The End. Celebrating the release of their fantastic third album, Lost Time, which dropped earlier this month, the group have nabbed headlines lately for both their theme for the rebooted Powerpuff Girls cartoon to their decision not to cancel a recent North Carolina show, in order to stand alongside the local LGBTQ community. If you like your smart, socially conscious punk rock delivered with a bit of humor, snark, and sugar-coated pop, Tacocat are your new favorite band. They’re a blast in concert, and for just $10, tonight’s show should be mandatory entertainment. Read on for a full preview!

After meeting and quickly bonding over shared taste, art, and ideology in their teens and early twenties, the members of Seattle’s Tacocat – now real life bffs – first formed the band nearly nine years ago. Originally a largely DIY endeavor, the group self-released a series of EPs, splits, and their debut full-length, Shame Spiral, before getting snagged up by Sub Pop imprint Hardly Art for 2012’s Take Me to Your Dealer EP and subsequent sophomore effort, NVM. It was the latter that would help boost Tacocat’s presence, fueling an international tour, finding critical acclaim, and putting them on our radar (we first caught the group live at The Stone Fox in 2014, and have been hooked ever since). Generally labeled feminist punk, Tacocat (three girls and a guy, or, as we call them, four humans) sing about queer issues, Seattle, pop culture, social injustice, worker empowerment, and, of course, feminism, all funneled through a comedic, lighthearted, and pop-driven approach that makes smart, important, and socially aware songs incredibly fun! Their latest, and best LP to date, Lost Time, arrived earlier this month; named in reference to The X-Files, and chock full of hypnotic, substantive tunes, it’s already a shoe-in for “best of 2016.” Just as fun live as they are in recording (or, as their music videos would suggest), Tacocat are a can’t-miss act not just for the importance of their culturally ideologically and how expertly they present it, but also because they’re simply a damn good band.

Seemingly a relatively new act, we don’t know much about Seattle’s Boyfriends, other than they seem to share Tacocat’s penchant for masking smart, socially aware messages in party-ready pop punk. According to Boyfriends, they “worship Freddie Mercury and host frequent nail painting parties,” and count “pigs in a blankets,” “bath bombs,” and “convertibles” among their hobbies. Sounds like these guys couldn’t be more suited for this show.

Locals Big Surr, who we’ve told you about on numerous occasions, have been tasked with opening this one up. Though their psychedelic, dreamy, fuzzy, beachy blend of rock is a little more laid back than the rest of the lineup, they still stare plenty of musical sensibilities with Tacocat and Boyfriends, and will set the tone right for a fun night; show up in time to show them some local love!