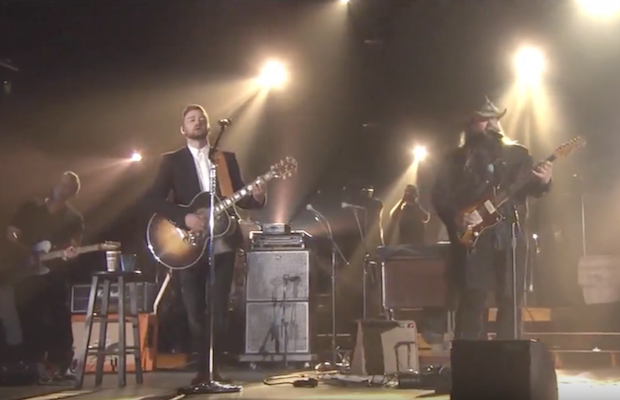 Though the 49th annual CMA Awards are still airing (tune in right now on ABC), we’re pretty sure the evening’s standout moment has already occurred, and, as such, has already wound up online. As we already told you, pop superstar Justin Timberlake made an appearance to perform alongside local breakout artist and site favorite Chris Stapleton, and man was it every bit as fantastic as it sounds. The pair first played Stapleton’s signature cover of George Jones’ “Tennessee Whiskey,” before slamming out a soulful rendition of Timberlake’s “Drink You Away.” You can watch the performance in full below (if the stream goes down, look here for a backup – we’ll hopefully be able update with an official video tomorrow)! In what has been an unusually strong CMAs year for recognizing legitimate talent (read: the country artists we actually care to cover), Stapleton has been awarded New Artist of the Year, Album of the Year for his recent effort Traveller, co-produced by Dave Cobb, and, in what might be perceived as something of a country establishment upset, Male Vocalist of the Year, one of the evening’s top honors.

(h/t Stereogum for the video links)