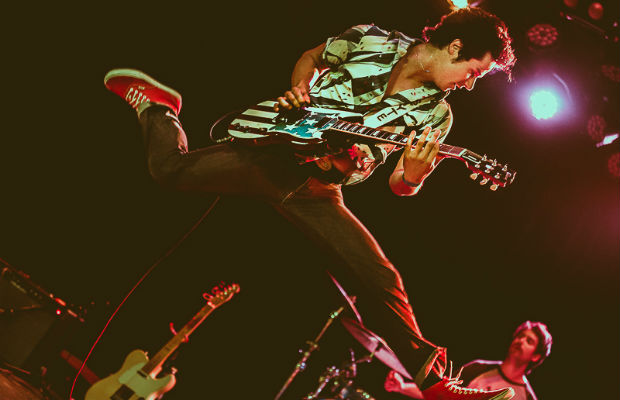 Over the past few months local favorites Turbo Fruits have played all over town, from Live on the Green to a house show at Exponent Manor, but if you haven’t caught them recently, you’ve got another chance tonight when they play at East Nashville’s Queen Ave. Also playing are local band Dogs of Oz, who just released their first album this month, and Chicago’s brother-sister duo, White Mystery. The doors open at 8 PM, with music starting at 9pm. The event is all ages and costs $10 at the door.

This year alone Turbo Fruits have released a stellar new album, No Control, and played Live on the Green. Now they’re making a hometown stop at Queen Ave on their fall tour. While they’ve played several recent shows around Nashville, this one’s sure to be something really special since it’s bound to be the kick-off for many people’s long Halloween weekend. With seemingly constant radio play in town and several recent shows, Turbo Fruits and their catchy single “No Reason to Stay” have been almost inescapable lately. While the band may be all rock and roll, their music is always poppy enough to dance to. Their energetic, off the cuff performances mean that this show is the perfect way to start your Halloween festivities.

Francis Scott Key White and his sister Alex White might be Levi’s jeans models who also happen to have a new film, but that’s all made possible by their musical prowess. As White Mystery, the duo are a rocking power house. Garage rock, with a punk edge, their sound is heavy and unapologetic.

Turbo Fruits, White Mystery, and Dogs of Oz will perform Wednesday, Oct. 28 at Queen Ave. The show is all ages, begins at 9pm (doors at 8pm), and tickets are available for $10 at the door.