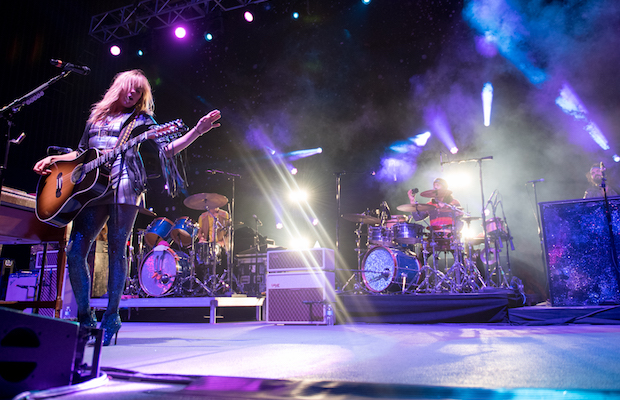 Lake Street Dive are a wonderful combination of self-effacement and pure musical talent. These four lead with the music, and only the music. Their sound is so big and warm in this amphitheater on a cool October night with the purple light streaming down and smoke billowing up to the outline of Monsieur Batman Building himself. You can see the band’s sense of humor as Michael Calabrese, the drummer, wore a fantasy unicorn breezy tank and lead singer Rachael Price said, “I don’t think they were intended to be worn on stage” (they were given to each band member as a gift). Rachael soon after gave a shoutout to her hometown of Hendersonville, a town north of Nashville that is full of rich lakeside property (also former residence of Taylor Swift and a place where Johnny and June Carter Cash spent 40 of their loving years).

Here is the scene: Rachael’s pink poodle skirt, wavy honey and strawberry blonde tresses, popping red lips, and the stir of the snare upright bass and trumpet against the backdrop of the Nashville skyline. Ascend is my new favorite venue…

“No Light” is a newer song of theirs that Rachael wrote. Each of them sung the piercing chorus words of “no light” while the tech guy shuts off all the lights in meaningful unison with the song. It’s the little things. One song that Mike Calabrese wrote starts like BB King dirty blues with the rough guitar riffs and then turns lighter on the chorus. That’s the greatness of LSD, they can master so many styles of music in one show and even one song.

Other song highlights included the spunky “Elijah,” the clanging rock of “Seventeen,” “Go Down Smooth” (always a favorite) and their new song “Hell Yeah” which brings to mind Gidget beach parties and inspires crowd interaction in their “hell yeah” of a chorus. More reasons to love LSD (yes, yes, haha, laugh all you want) include… (1) Bridget Kearney, the bass player, bringing feminism to the upright bass with her fast fingers and devil may care attitude – she has the manner of a rapper spitting riffs when she ends a a run. (2) Their version of Annie Lennox’s “Walking on Broken Glass” with the bass starting that classic melody and the trumpet player, Mike “McDuck” Olson joining in, is my new favorite thing in the whole world and you can watch their version at 2015’s Outside Lands here.

Rachael Price is probably the best singer I have ever heard live besides an opera singer in the way that she dances all over the scale with such ease and knows exactly when to go big and when to hold back. She’s jazz. She’s blues. She’s Motown. She’s pop. And, what she is, so is the band. Lake Street Dive are a must-see group – for their skill, ingenuity, recreations of past sounds into modernly comedic interpretations. 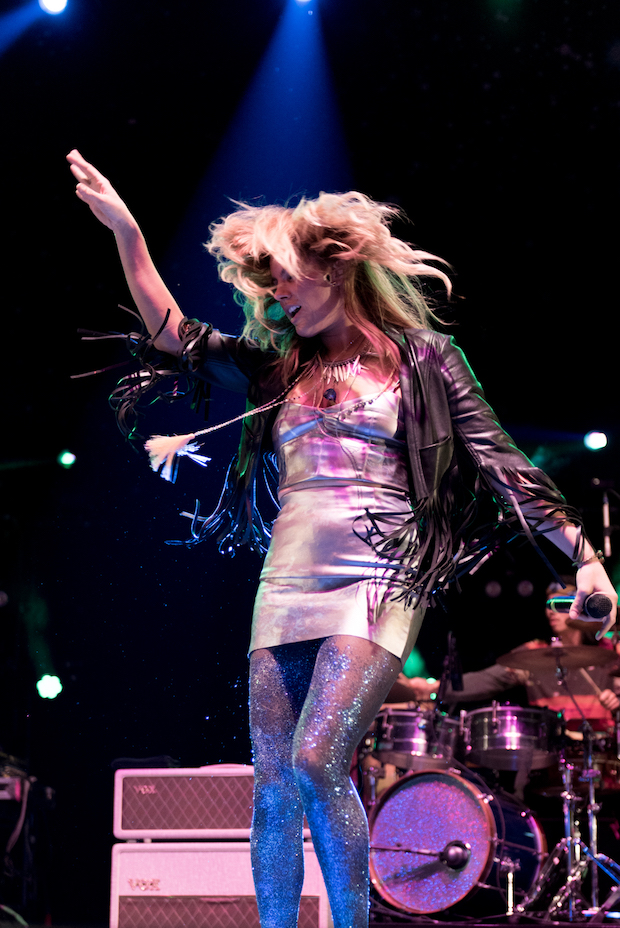 Grace Potter’s set began like a very, very creepy intro to a Halloween horror film with whispering ghost voices and giant ticking clock sounds that ominously signaled that the witching hour had begun. “Hot to the Touch” lit the black magic candle with witchy ’80s fierceness; think Pat Benatar, pure femme fire. The only other woman in her band, the keyboardist I believe, was even wearing big Steve Nicks style bell sleeves. You can tell that Grace loves Halloween, she loves hippie rock, and she love, love, loves to belt it and dance it out Tina Turner style. With a sparkly, crystallized silver dress, glittery silver tights, fringe-sleeved leather jacket, and glittered, silver boots of the same color as her tights, Grace looked like a rock idol right out of the Californication script; the idea of what rock was and should be. She goes for it and she succeeds in embodying that free love, mystical magic vibe of her long-haired parents. 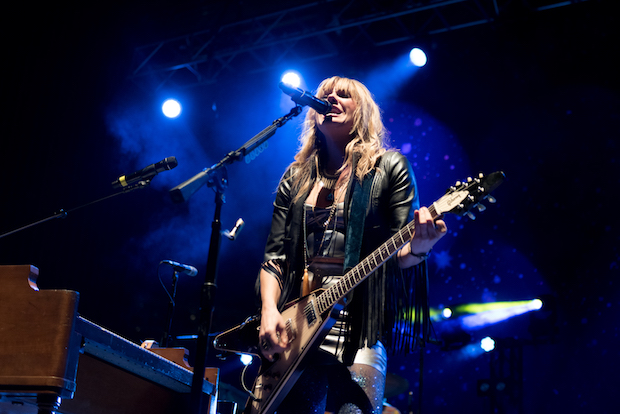 Grace is on a solo tour, but she seems to have an even bigger band: 2 drummers, 2 guitarists, 1 guitarist/piano player, and another keyboardist. She also plays the keys and the guitar when she isn’t swirling and twirling around and attempting to bewitch you with her movements, literally trying to pull you in. Grace was born to play stadiums. She was born for costume changes and emotional cries and screams that bring the song to a higher altitude. Besides the full band, full court threat for “Alive Tonight,” “Empty Heart,” and the most funky/funny of the album “Your Girl,” she also slowed it down and stripped it down for a cover version of “Wild Horses” with Rachael Price and on “Stars,” a glorious single from The Lion The Beast The Beat album. These songs were simply her on a stool with her guitarist playing acoustic. She shows her range alright.

She and Rachael sang well together, and Grace said this about her openers: “Let’s talk about mutual respect… fucking Lake Street Dive people.” “In a city like this that is so aware of the difference between good and bad, I am so glad to be a part of this with Lake Street Dive.” Besides being über talented, Grace Potter has that one love feeling that stems from the free love days of ’69 which her family is so connected to. She appreciates musicians who do it for the passion, the love of the art. She lets her freak flag fly, living out her little girl dreams of singing and dancing. The joy is childlike, it’s sparkling, it’s magic.