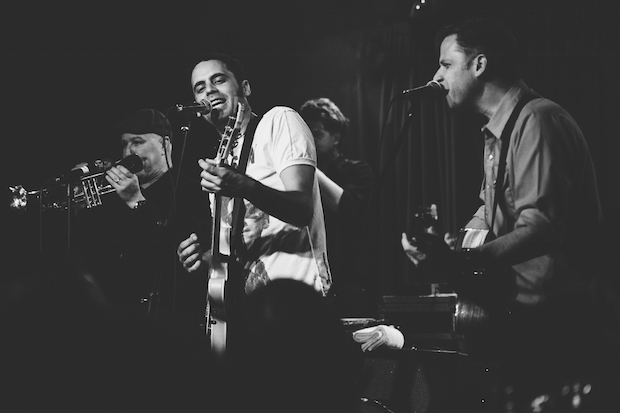 While many bands find one thing that they do well and stick to it, Calexico are a band that have found they do many things well, and have used that to their advantage. Alternating between songs in English and Spanish, sounding sometimes like a more traditional, if there is such a thing, alt-country band, and sometimes like the most festive party band in the best South of the border hole in the wall you can imagine, they’re a band that takes the audience on a ride with each performance. Opener Gaby Moreno, who won “Song of the Year” in the Latin Category of the John Lennon Songwriting Contest in 2006, lent her haunting vocals to several of Calexico’s songs and captivated a full Mercy Lounge with her set earlier in the evening.  Head below for our full recap, and some great shots of the headliner from Jackie Osborne.

Gaby Moreno may have been opening for Calexico Friday night at Mercy Lounge, but when she took the stage, it felt like she was headlining the show. The packed room was quiet, reverent even, for her entire set. Her strong, clear voice was haunting and affecting, leaving those who hadn’t heard of Moreno stunned, and those who had come to hear her play, satisfied. Her sound was jazzy, evoking a sense of nostalgia, but in a way that felt authentic and current, not dated. Moreno’s set was powerful and charming, a pleasant surprise for anyone who wasn’t familiar with her work and the audience was more than happy when she made appearances with Calexico during their performance.

Calexico are a band that are good at many things: festive party music, alt-country, and radio friendly songs are just some of the things they churn out and at their Mercy Lounge show on Friday they brought it all to the table. With almost every member of the band switching constantly between instruments including trumpet, percussion, guitar, and keys, they kept the audience on their toes the entire time. They played a long list of songs, including several from their new album, and kept them short enough to never lose the audience’s attention but still show off their impressive chops.

From the beginning, the show switched directions at the top of a hat as the band mixed all the sounds they’re good at into the set. The band was as energetic as ever, playing with an energy like it was their first show, though they’ve now been a band for over 20 years.

About midway through their set they brought opener Gaby Moreno on stage to sing vocals, and even to perform one of her own songs. Moreno took the stage amid shouts and cheers from the audience and her vocals added an ethereal vibe to the dark, desert influenced Calexico songs.

Whether they’re playing South of the border party music or alt-country complete with an upright bass and pedal steel, Calexico are masters of what they do, always aiming to put on an interesting and fun show for their audience and not just playing to please themselves. Over two decades in, Calexico are a band who are constantly still churning out interesting music and making all their shows feel like their first. If you’ve never heard them live, they might surprise you with all the directions they’re able to go in, but you’ll definitely walk away feeling like you got your money’s worth, and got to hear several great bands, all rolled into one.