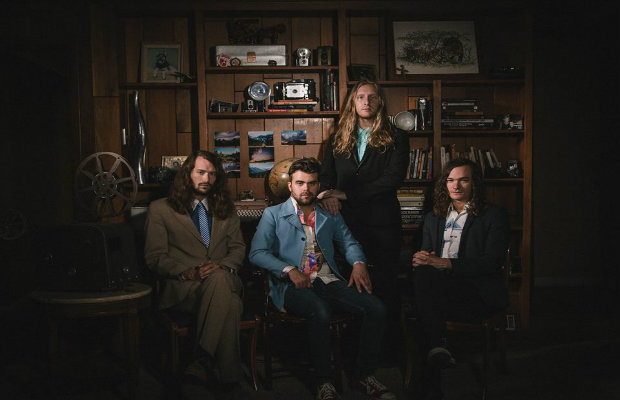 When The Gills’ singer/guitar player Jesse Wheeler first started playing music as a teenager, it was as a kind of catharsis, to deal with his childhood battle with leukemia. His music was funny, a way to make himself and the people around him laugh in a difficult time. Today, Wheeler’s music is still fueled by emotion, but it’s heavier and rougher around the edges, reminiscent of bands like the Arctic Monkeys. The Gills will be playing a single release show, for their song “Rubberband,” at Exponent Manor TONIGHT, Sept. 23 with much lauded local youngsters Jawws and longtime site faves Turbo Fruits, just over a week after their outing at Live on the Green. The show begins at 9 p.m. (doors at 8 p.m.) and will cost you just $5.

Originally from Pensacola, Florida, The Gills have been in Nashville now for several years. Their just released single “Rubberband” is the first off their upcoming, self-titled album, which should arrive at the beginning of next year. The track is grittier than their past work, but stays true to the band’s pop rock roots and style. The songs on the album are straight forward and their energetic live shows are much the same; The Gills’ release show tonight is sure to be something special.

The guys in Jawws might be young, but they’ve received more acclaim in their short time as a band than most bands twice their age do. We’ve been singing their praises for a while now, because they’re one of the most impressive, authentic hardcore bands in town, age aside. They played our showcase at Acme Feed & Seed just last month, and it made for one of the craziest nights we’ve had at Acme yet. Their feel is perfect for a house show like tonight’s at Exponent Manor, and they’re sure to be as rowdy as ever.

Over the summer, we were excited to share with you Turbo Fruits’ video for their song “No Reason to Stay,” which featured a long list of Nashville locales, including Printers Alley, Betty’s, Hattie B’s, Villager Tavern, and lots more. This week, they’ll be visiting another a local spot, Exponent Manor, just over a week after playing Live on the Green. There’s no telling how many people might show up for this show, so we suggest getting there early to be sure to catch The Gills and Jawws. Music starts right at 9 p.m.

The Gills, Jawws, and Turbo Fruits will perform September 23rd at Exponent Manor. The show is all ages, begins at at 9pm (doors at 8pm), and tickets are available for $5 at the door.