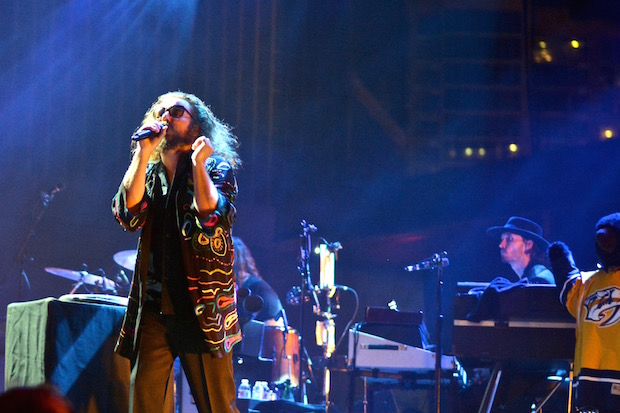 It’s becoming quite clear around Music City that Ascend Amphitheater is not messing around. Maintaining one of the strongest venue-opening weeks we’ve ever seen, the outdoor concert hall followed an epic two-set night from Phish with a barn burner from My Morning Jacket. Local favorites (who have been growing in popularity nationally), Moon Taxi opened what was yet another perfect evening of kick ass rock ’n’ roll in downtown Nashville. Read on for a full report, and to peruse through some great shoots from Jen Silver.

After only catching the end of their blazing Which Stage set at Bonnaroo ’15, I was very eager to get to Ascend on time to catch all of Moon Taxi. Luck would smile on me as I strolled in during their very first song, before finding a great spot on the lawn to soak in their set. The thin but continuously growing crowd was grooving to the rhythm of the familiar songs, the whole time MT seemed genuinely thrilled just to be there, and opening for what they described as their one of their favorite bands … at the brand new amphitheater none-the-less. It was defiantly a huge moment for a local band who’ve been having a lot of them recently. In addition to a new album, Daybreaker, set for an October release, they’ve also been added to the already massive Live On The Green lineup!

They finished up with the sun beginning to set, and I was reminded yet again how perfect life could be, especially with perfect weather. Rain had been in the forecast, and fell for most of the day, but now the skies were clear and the temperature was hovering in that perfect zone that most of us tend to enjoy. Soon enough it was time for the headliners to come out and shred. 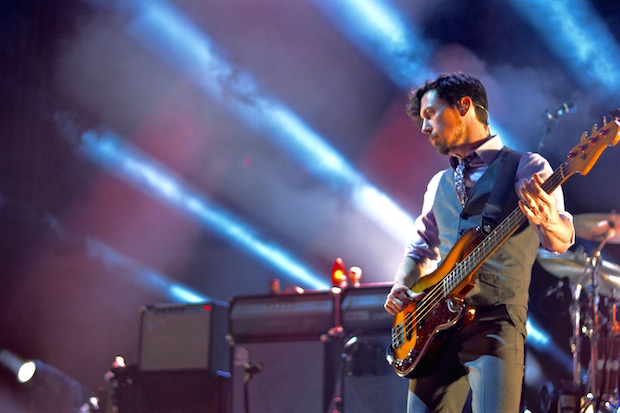 We were about three 25 ounce, $12 Budweisers deep when My Morning Jacket dropped the lights and took the stage. They started their blistering, hit-heavy set with one of my all-time favorite songs, “One Big Holiday”, which surprised me a little. They had closed their jam heavy performance at Bonnaroo 2015 with the same song, so I was not ready to hear it so soon. Of course it still kicked ass just the same, but it was obvious the Nashville setlist would be longer and performed tighter than it’s ‘Roo counterpart.

Sure enough, they packed in an amazing volume of songs, with out skipping fan favorites like the dance-party inducing “Touch Me Or I’m Going To Scream (Part Two)” or the instant sing-a-long gem “Holdin’ on to Black Metal”.  They also dipped heavy into their new record, The Waterfall, including playing the title track, which is the song I liked most from the LP. It was super encouraging to see all the younger fans singing along to the new stuff. I’ve been on board for awhile, but most of the people there were a few years behind me, so the band is gaining the all too important new fans, as well as keeping older ones. It’s obvious MMJ is no flash in the pan either, considering I’ve seen them four times now and each show has been better than the last, no bullshit!

“Turn off all the lights,” singer/guitarist Jim James said, instructing the venue staff at about the halfway point. “Let us bask in the glow of the rainbow bridge,” he added in referencing the illuminated Korean Veterans Bridge, which forms an impressive backdrop to the venue. “Thank you so much for taking the time to be with us tonight. Let’s take care of one another, love one another and appreciate each other.” Wise and kind words indeed, from one of the most effortlessly cool frontmen from this generation.

They closed out the encore with my hands-down-most-loved song, “Mahgeetah”, which brought almost every single person in the crowd to euphoric hysteria. They rocked it as hard as ever, and in their trademark fashion, pump faked the crowd several times before officially ending the rowdy number proper, with a shreddy send off, and a wave good night. Another wonderfully powerful performance by one of my all-time favorite bands, in downtown Nashville, walking distance from the country flavored din of Broadway. Rock ’n’ Roll dreams do (and will continue) to come true, thanks to Ascend Amphitheater.