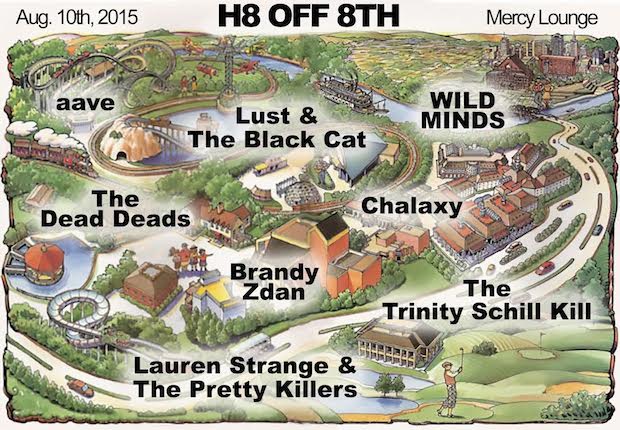 If you’re addicted to Twitter like most of us here on the No Country staff, you’ve probably seen the hilariously hateful jokes of the new parody account called Nashville Rage. The unknown person behind this online persona has apparently had it up to here with the hipster culture of “New Nashville”, and isn’t wasting any time letting us know how he/she feels (Exhibit A: “I would rather watch season two of true detective every day for the rest of my life than go to your show”). Snarky commentary aside, Ragey has really good taste in music and has decided to bless us with this hand-picked lineup of Lust & The Black Cat, Wild Minds, Chalaxy, Brandy Zdan, The Trinity Schill Kill, Lauren Strange & the Pretty Killers, Aave and The Dead Deads for tonight’s edition of 8 Off 8th, lovingly titled “H8 Off 8th”. It’s free, as always, and starts at 8pm, so read a little bit about the lineup after the jump and head on out to Mercy Lounge tonight to–dare I say it?–rage.

Lust & The Black Cat is the stage name of Jessica Harold, a producer/singer/songwriter who specializes in dark, electronic music perfect for dancing and brooding.

Punk/power pop trio Wild Minds caught our attention awhile back with their single “1993”, and we’re excited to catch their live show tonight to hear what else they been up to.

Psych/alternative rock outfit Chalaxy is known for their enthusiastic songs and electrifying live performance, so they’re sure to get things moving.

We love the new pop-rock sound of Canadian singer-songwriter Brandy Zdan. The former Twilight Hotel frontwoman moved to Nashville in 2008 and is currently working on a new album, so we’re excited to hear more from her tonight.

Local electronic duo The Trinity Schill Kill make infectious pop melodies that are almost impossible to resist dancing to, so channel your inner Michael Jackson when you check them out tonight.

Indie rock darling Lauren Strange and her backing band The Pretty Killers have been tearing Nashville up lately, so if you haven’t caught their show yet, here’s your chance.

We premiered post-rock band aave’s new single earlier this month, and are ready to chill out to their ambient sound tonight.

If you haven’t seen The Dead Deads by now, you’re seriously missing out. The all girl punk rock band known for their fun lyrics and loud guitars has opened up for the likes of Halestorm and are going on a cruise with Motorhead later this year, so that right there should tell you what you need to know.

Live On The Green Adds Moon Taxi, Family Of The Year, Colony House, and More!