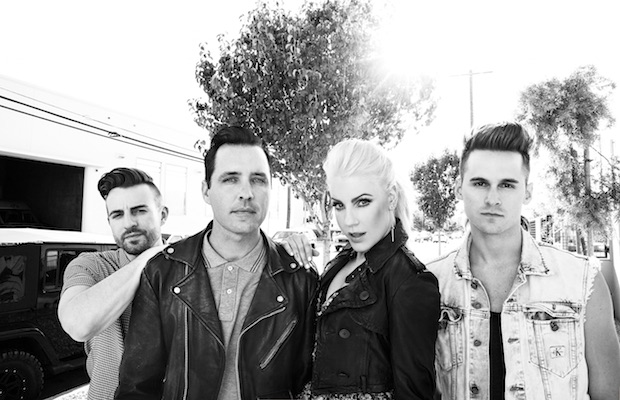 Celebrating the June 2 release of their bombastic debut LP, Savages, out via Red Bull Records, local electro rockers Five Knives are performing their first hometown show of 2015 TONIGHT, June 5 at The Basement East! Backed by site faves The Wans and Hot Tub Club, this is sure to be a rowdy, kickass way to kick off your weekend. As great as Five Knives are in recording, they’re every bit as epic live, and, for a mere $7, we can think of no better place to spend your Friday night. Find out all about Five Knives and the road to their new album in the latest episode of our No Country For New Nashville Podcast, and find out more about tonight’s lineup below!

Channeling elements of punk, pop, EDM, and alternative, Five Knives erupted onto the scene with a bang a few years back, garnering immediate buzz for their frenetic, artistic, and visually unpredictable performance style (masks, lasers, etc), and genre-bending DIY releases. Soon snatched up by Red Bull, they dropped their “official” first EP, The Rising, in 2013, and have spent the last several years touring with the likes of Icona Pop, making festival appearances, releasing various singles and remixes (one of which landed a Grammy nomination), and generally honing the sonic evolution that led to Savages. As well-embraced by the electronic community as the rock world, the group’s mass appeal, coupled with their unparalleled stage show and meticulous attention to detail, has made them one of Nashville’s best acts to emerge in recent years, and we couldn’t be more excited to see their latest material performed live!

A buzzy and integral part of the Nashville rock community, The Wans have been on our radar pretty much since day one. Their debut full-length, He Said, She Said, was, without a doubt, one of our favorite Nashville releases of last year, and the band have impressed us time and time again with their fantastic stage show. Part retro rock, part grungy alternative, and part contemporary garage rock, The Wans have a knack for fusing influences and crafting hooks that sound all at once polished and raw. Certainly less dance-infused than Five Knives, The Wans are nonetheless a great compliment to this bill for their loud, live energy alone.

We’re not entirely sure if they’re opening the show or closing it with a late night set (as they sometimes do, though it appears to be the former), but one thing we do know is that you absolutely don’t want to miss out on the shenanigans of local hip hop collective Hot Tub Club. They don’t exactly take themselves too seriously (riding around in gold spraypainted whips, performing in masks, writing satirical songs, and incorporating saxophone into rap), but their live show is a unbeatable spectacle, and, at their core, the production is pretty damn fresh and the songs and delivery are actually pretty great. Read: satirical hip hop group who actually make good hip hop.

JEFF The Brotherhood Premiere New Video For "In My Mouth"