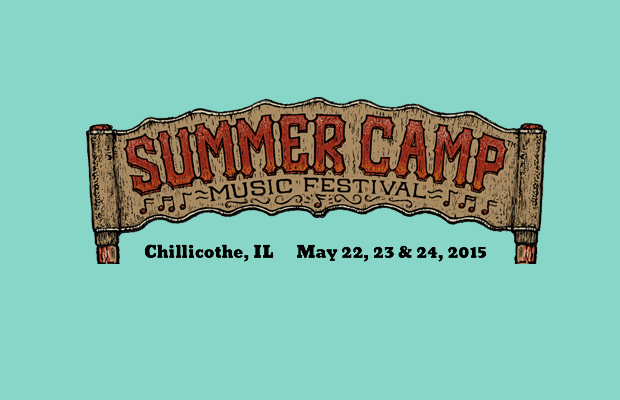 We’ve got our wagon assembled and our groovin’ shoes on. That’s right, we’re packing up and heading to Chillicothe, Illinois, for the 15th annual Summer Camp Festival this Memorial Day weekend. The weather forecast seems to be shaping up nicely, and we expect a beautiful weekend in the Midwest. Summer Camp will feature over 100+ bands on 7 stages, and, in case you are still wondering who you need to see, we’ve rounded up our list of must-see act below (plus highlighted the weekend’s Music City performers at the bottom)! You can still buy tickets here if you’re looking for a long weekend getaway.

Transplants from Los Angeles to Chicago, the members of Family Groove Company met in music school. This band ooze old prog like Yes, Camel, and Zappa, with some serious cues mixed in from Steely Dan, and wrap the package up with some deep Herbie-esque funk. We are definitely going to make sure to take part in the Family Grooves at the Starshine Stage on Thursday at 6:30 p.m. or Saturday at noon!

ProbCause was brought to our attention via his collaboration with The Palmer Squares, his work with Chance the Rapper, and through touring with Nashville favorites, Cherub. Our curiosity peaked this winter when the rapper/producer did a run of dates with Earphunk and CBDB. We are interested to see how and why all these worlds are collidingm and will finally get the explanation at the Camping Stage on Sunday at 9 p.m.

In recent years, the “progressive rock” genre has become almost synonymous with “progressive metal”. We like Aqueous because they get heavy, they get intricate, and they get progressive without crossing over into metal territory. These guys are from Buffalo, NY, and as far as we know, they’ve not ventured anywhere near Nashville, so catching them will be a nice first. Aqueous will be holding down the Camping Stage Thursday night at 8:30 p.m. and again on Friday at 8 p.m.

Yonder Mountain String Band have both the chops of an accomplished, traditional bluegrass band and also the improvisational abilities to stretch out songs into all out jams. They also recently revamped their lineup, and their sound and energy are as fresh as ever. If you’re looking to get down to some “jamgrass,” check out YMSB’s Sunday set at 2:45 p.m. at the Sunshine Stage.

We caught Pigeons Playing Ping Pong in Knoxville a few months ago, and, frankly, they can straight jam. When it comes to jam bands, there is a threshold that most acts don’t cross; it’s a sort of connection on stage that takes jam bands to the next level and engages the audience to the point that they couldn’t possibly leave before the end of the set. These guys do that, and they do it well. Lose yourself in one of their jams at the Campfire Stage at 6:30 on Sunday!

Widespread Panic are widely considered to be the gold standard of the jam scene these days. The boys have played countless shows and festivals for almost 30 years, and they don’t show signs of stopping anytime soon. 2015 marks only their second appearance at Summer Camp, so be ready for WSP to bring the heat. They will also be making their way to Nashville over Labor Day weekend to help break in the new Ascend Amphitheater as well. If you like extended jams with southern flair, make sure to catch both of Panic’s back to back Sunday headlining sets at 7 and 9 p.m. at the Sunshine Stage.

This one is easy. Watch the video below, and go see the show. Anyone who can rock out as hard as Dopapod deserves a shot. You can catch them at the Starshine Stage on Friday at 7 p.m. or opening up the Red Barn with late night show on Thursday night.

Steve Miller is a rock n’ roll, hit-making legend. Depending on how old you are, you probably grew up listening to him, and regardless of how old you are, you’ve probably rocked out at least a few times to hits like “Take the Money and Run,” “Fly Like an Eagle,” and countless others. We’re excited to see what kind of live experience the Steve Miller Band has to offer with a more than likely great hits heavy set. Catch the group Sunday at 5:30 pm on the Moonshine Stage.

STS9 are one of those bands who have always straddled the jamtronica fence. Generally speaking, EDM isn’t really our central realm of focus, and Tribe have bounced back and forth around that genre quite a bit over the years. However, we were able to catch their Halloween show in Nashville last year with new bassist Alana Rocklin, and, we must say, our ears were pleased. The “new STS9” is a lot more Sound Tribe Sector Nine than STS9, and we like it. The focus on group jamming is back, and, while you still won’t hear many solos, the jams go places. We are very excited to see how they’ve grown together since October. Catch them on Friday night at 12:30 a.m. or Saturday night at their late night Red Barn set.

TAUK are somewhat newcomers to the jam scene, but are quickly becoming the next big name with their rock and jazz infused melodic jams. We have had the pleasure or catching a couple of their most recent shows in Nashville this past winter and spring, and have always been blown away. You’ll have a chance to catch them at the Campfire Stage on Saturday at 5 p.m.

The Motet are a band led by the rhythm section, specifically drummer Dave Watts. Watts will guide the group through an energetic, horn driven set of some of the nastiest funk you will ever hear. Typically, we would regard 6 o’ clock on a Saturday as a tiny bit too early to bust out the dancing shoes, but it doesn’t seem we will have an option this time around. Make sure to catch their set at the Starshine Stage! Musicians: you won’t want to miss this one!

Moe. have basically played host to Summer Camp Festival since its inception in 2001 . They are playing 5 sets from Friday through Sunday evening on the Moonshine Stage, including a Sunday set with special guest Bruce Hornsby featuring music from The Grateful Dead, and a 6th specially ticketed late night set on Friday night at the Red Barn. Be ready for sets full of heavy hitters and tons of surprises. In our opinion, any number between 1 and 6 is an appropriate amount of Moe. performances to partake in for the weekend.

Umphrey’s McGee have found a festival to call home, playing Summer Camp annually since 2003. We take advantage of every chance we get to see this band because of their talent, energy, and professionalism. No other act, night in and night out, are able to create a truly unique live experience like they do. Umphrey’s will be playing a total of four sets on Friday and Saturday at the Sunshine Stage (including a double hitter). Make sure you catch at least one.

Earlier, we told you there were only four sets of Umphrey’s McGee, but there are actually 5 if we include their alter ego, GODBONER, with special guest Gene Ween of Ween, forming GODBONER MEETS GENE WEEN. The reason this act comes in at #2 is that frankly, we have no idea what this set will entail, but we have a good feeling it will be well worth checking out. After all, Summer Camp is the only place that we can catch this rare collaboration this summer and maybe ever. Plan on being at the Sunshine Stage on Friday at 7:45 p.m. to witness a one of a kind performance.

Let’s face it, most of us didn’t get tickets for the Grateful Dead’s “Fare Thee Well” shows. How about the next best thing? Joe Russo may be the most accomplished modern day drummer, and he has put together a band with tons of chops. They may technically be a cover band, but JRAD truly embodies the music and spirit of the Grateful Dead while making the tunes their own. Take a trip back in time with us, and enjoy a set full of good vibes honoring the Grateful Dead at the Moonshine Stage on Saturday at 5:30 p.m.

Those are the bands you can’t miss from all over! Now here’s a little love for our own Music City acts big and small, set to make the trek to Summer Camp this weekend as well, who need no introduction: