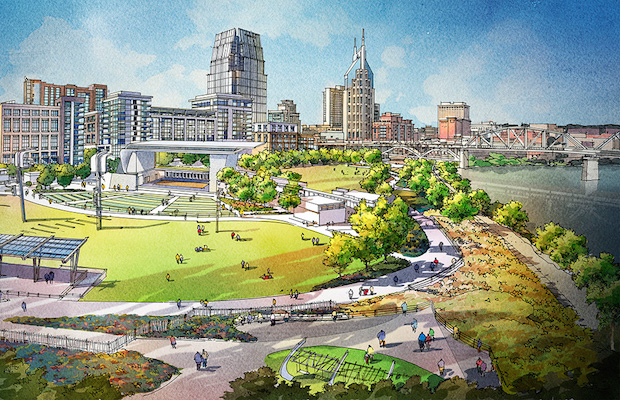 We had a feeling “West Riverfront Park Amphitheater” wasn’t going to stick. Announced this afternoon in a press conference, we’ve learned that the new downtown 6,800-cap amphitheater (at 1st Ave S and Korean Veterans Blvd), which is city funded and Live Nation operated, will be  called Ascend Amphitheater (named for Ascend Federal Credit Union). Along with the name reveal came the announcement of 21 shows for the outdoor venue’s inaugural season (including the already announced Phish and Steely Dan/Elvis Costello performances), which is currently slated to kick off July 30 with Eric Church. Other highlights include The Smashing Pumpkins & Marilyn Manson, Peter Frampton & Cheap Trick, Old Crow Medicine Show, ZZ Top, Widespread Panic, Grace Potter, and more!  The Nashville Symphony will also begin hosting outdoor events in the park in 2016.

The space will also include a 1.5 acre park, ornamental gardens, a dog park, sports facilities, and free WiFi. Check out the full season lineup (so far) below, and look for tickets to go on sale in the coming weeks!

Birmingham's Secret Stages Announces Dates And Initial Round Of 2015 Artists