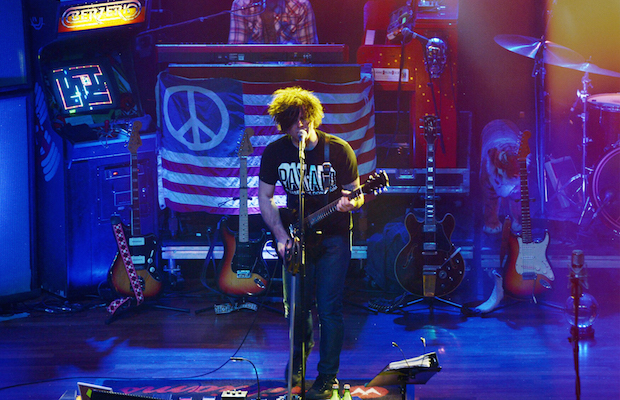 In support of his fantastic self-titled album, released last year, multifaceted singer-songwriter Ryan Adams returned to The Ryman for the first time in nearly a decade, to perform two sold out nights of career-spanning sets, with special guests, support from local(ish) rising star Natalie Prass, and, of course that surprise cover song that set the internet ablaze. We caught night two of Adams’ stellar show, so read on for our review plus a gallery of photos! 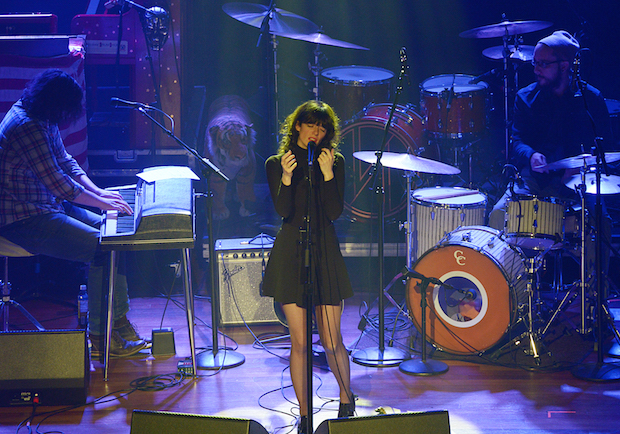 I’d been hearing rumblings lately that Natalie Prass, who’s spent the last few years and effectively cultivated her sound as a Music City resident, would be leaving us, and, during her set, Ms. Prass confirmed the news; she’s now a resident of Richmond, Virginia (my former home, in fact), where her band and label are located. After a career-making year touring as part of Jenny Lewis’s backing ensemble, the whirlwind of worldwide critical praise surrounding the release of her debut LP earlier this year, and an unprecedented run of shows with Ryan Adams, we couldn’t be prouder of Natalie’s success, and wish her all the best (though we’ll miss being able to claim her for Nashville)!

My only prior experience seeing Prass live was during a transitional phase where she performed alone, employing electronics and loops to flesh out her sound. Even in that every different setting, her raw talent was undeniable, and getting to see her play her new material with a full band for the first time at The Ryman was absolutely surreal. Poised, confident, and charismatic, Natalie is, for all intents and purposes, only beginning her career, but she’s already a natural star. Blasting through an all-too-short set of her hypnotic tunes, and backed by an incredible group of players, Prass commanded the show, alternating between guitar and vocals alone, and definitely looking like she’s picked up a trick or two though her constant recent travels. Though Ryan’s been known to cover Natalie’s music at recent shows, this evening, for the first time, Prass took a stab at a one of his tunes, putting an amazing spin on “My Winding Wheel.” Immediately after, and without a lot of fanfare, the man himself emerged, grabbing Natalie’s guitar to back her for a cover of Janet Jackson’s “Any Time, Any Place,” and sticking around to assist on her original tune “Violently” (the room, of course, erupted). At the genesis of what is sure to be a long and prosperous musical existence, Natalie Prass opened the show not as a burgeoning talent, but as an equal, and I can’t wait to see what comes next. 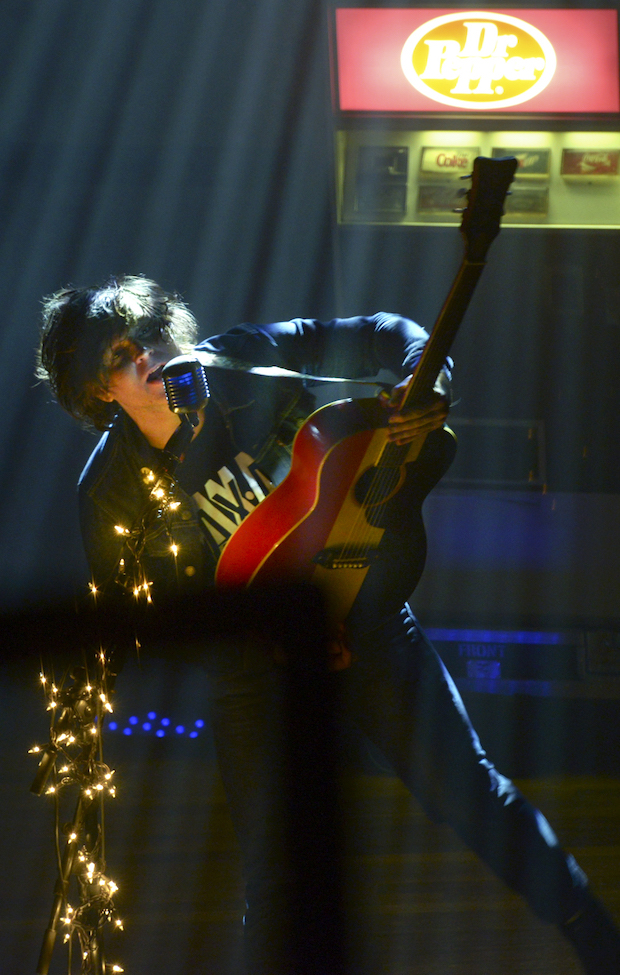 With 20 years of discography to pull from (counting his old band, Whiskeytown, then solo releases plus albums from Ryan Adams & The Cardinals from ’00 on), you never quite know what to expect from a Ryan Adams show. This being my first Ryan Adams show (which is practically criminal, considering I’ve been a superfan for around a decade), I really didn’t know what to expect. The singer’s stage, which was decorated with vintage arcade cabinets, a retro Dr. Pepper machine, comically gigantic replica Fender amps, a crystal ball, a peace sign flag, a stuffed tiger and owl statue, constantly burning incense, and more, seemed perfectly representative of his current frame of mind. In his younger years, Ryan had a reputation for being somewhat insufferable and unpredictable (which I’ll address in a story at the end), though never anything less than a musical genius. These days, the musical genius remains intact, but, as a person, Adams seems more at peace with himself, happier, and quicker to embrace whatever he’s into (whether it be punk rock, Metallica pinball, producing Fall Out Boy, nerding out over Godzilla, or switching genres with every other release), which gives us a rare, more complete personal sense of someone who we only previously knew from his damaged, beautiful art.

Ryan Adams is the singer’s best album in a few years (not that he’s ever made a bad one), in my opinion, and his Ryman set boldly kicked off with lead single “Gimme Something Good.” The rest of the evening would pull pretty extensively from his limitless catalogue (don’t get me start on his unreleased “dark albums,” of which there are supposedly almost as many as officially sanctioned ones), giving the most attention to fan-favorite debut Heartbreaker, and, to my delight, squeezing in three cuts from my personal favorite, Love Is Hell. This far into his career, Adams plays with a seasoned effortlessness, though at no point did the set feel so rehearsed that it was safe; readily apparent when he informed the band just seconds before launching into “New York, New York,” that he decided right before the show, while setting a high score at Metallica pinball, that he was going to play a stripped down, acoustic and harmonica arrangement. Different incarnations of the singer’s career have necessitated a widespread range of instruments, but this lean, multi-facted group of performers surrounding him made sure to hit every note, practically linked up with their frontman as if through telepathy. 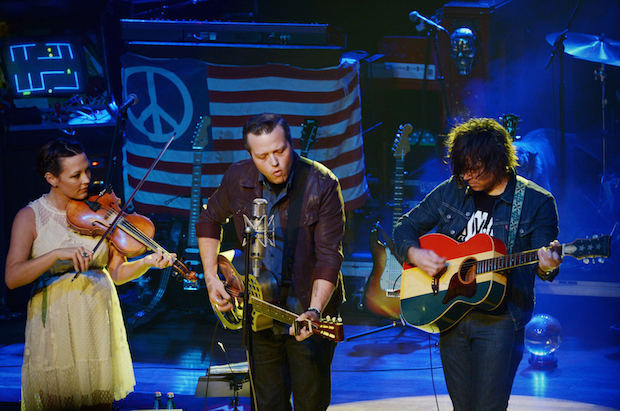 Decked out in his now signature denim, with messy, rocker hair (his go-to look these days is basically to embody his new album’s cover art at all times), Adams reinforced his reputation for being one of our generation’s most prolific, skilled performers, and flexed his range alternating from electric guitar freakouts (“Shadows”) to solo, acoustic, and melancholy arrangements. In a lighthearted mood, he bantered between tunes (“I wrote this song in Nashville when I was living in a hotel. I was a miserable person back then. In the past ten years, I’ve learned that they’re called clogs…,” served as a setup for “When the Stars Go Blue”), joked with the audience (performing his take on imaginary tunes, based on incoherently shouted requests), and poked fun at southern hospitality and cuisine.

Having clearly developed a strong musical bond with Natalie Prass, Adams returned the favor by covering one of her own tunes, “My Baby Don’t Understand Me,” before inviting her on stage, along with local singer-songwriter Jason Isbell, to back him on “Oh My Sweet Carolina.” Isbell would return later, along with his wife Amanda Shires, to tackle Whiskeytown’s “16 Days,” a song that couldn’t be more perfectly suited for the history and ambiance of The Ryman.

As the long and unforgettable evening began to wane, Adams stepped off the stage after a heartfelt delivery of “I See Monsters,” then, quickly, a stagehand taped a lyric sheet front and center, and, without more than a pausem Ryan reemerged with a telling expression, and began an acoustic cover of Bryan Adams’ “Summer of ’69.” If you don’t know the story, it was on The Ryman’s very stage, all the way back in 2002, that Ryan famously had an on-stage meltdown, kicking out a fan who jokingly requested the track after personally handing him a refund, then subsequently trashing the venue in a blog post. Though he’s been back a couple of times since, the incident has never been discussed much; especially not at The Ryman. Reinforcing what I said earlier about the Ryan Adams of 2015, being a happier, more at peace Ryan Adams, that cover couldn’t have been more fitting. The fans familiar with the story exploded with a mix of amusement and excitement, which carried past the next tune, “Come Pick Me Up,” for which Natalie Prass resurfaced, and was intended to be the evening’s last. Though the house lights had come up and the exit music was blaring, the audience, a mix of young and old, trendy and preppy, polite and obnoxious (see, the loud, nonstop talkative group of girls sitting behind me), erupted into the most ferocious applause I’ve ever witnessed in the Mother Church, and effectively forced another encore, which consisted of a simple, beautiful, acoustic performance of “My Winding Wheel.”

As one of my all-time favorite artists, I expected Ryan Adams’ show to be nothing less than breathtaking, but actually getting to see it, and in such a sonically perfect, historically rich room, and one that even holds so much history, for better or worse, for Adams himself, was unbelievable. This was a performance I won’t soon forget, and I one I suspect will be showing up on mine (and plenty of others’) end of years lists in the future.

Gimme Something Good
Let It Ride
Stay With Me
Dirty Rain
Dear Chicago
This House Is Not For Sale
Why Do They Leave?
Magnolia Mountain
New York, New York
Fix It
Shadows
Everybody Knows
Anybody Wanna Take Me Home
When the Stars Go Blue
My Baby Don’t Understand Me (Natalie Prass cover)
Oh My Sweet Carolina (with Jason Isbell & Natalie Prass)
Peaceful Valley
16 Days (Whiskeytown song) (with Jason Isbell & Amanda Shires)
La Cienega Just Smiled
I See Monsters
Summer of ’69 (Bryan Adams cover)
Come Pick Me Up (with Natalie Prass)