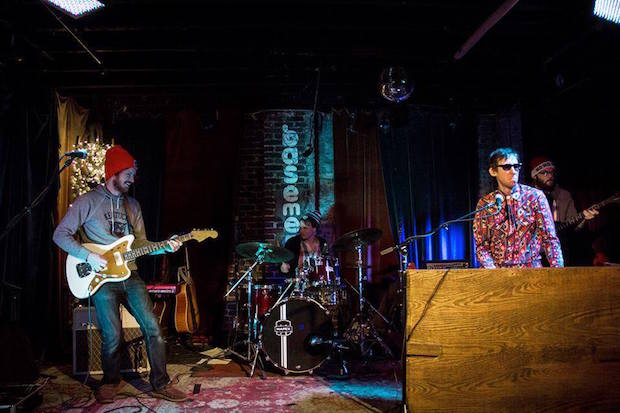 Resident beach rock aficionados, and No Country Presents alum, The Beech Benders will be channeling some SoCal vibes tonight at The East Room. The sun, sand, and surf are not included, but hopefully the music can warm us up in spite of this dreadful and dreary winter weather. Expanded folk duo, The Western Shore, roots rockers Nellie Pearl and bluesy singer songwriter Sara Syms fill out an impressive bill, at only $5 we might add. Doors are open at 7:30, music starts about 8 pm, so be there, and make your Monday not suck.

Comprised mostly of members in other bands (Zach Tichenor on keys, also of ELEL) The Beech Benders, and their brand of instrumental surf rock were formed mostly on a lark; friends hanging out and jamming together. However, with each performance they seem to be honing their skills in an often overlooked subgenre that we still enjoy. Hell, they impressed us so much, we asked them to play our Acme showcase, but you don’t have to take our word for it. Have a taste below and go see for yourself. Don’t forget your shades and sunscreen, dude.

A resident husband and wife outlaw-country-meets-folk duo, The Western Shore, will be expanding on their sounds for the show tonight, adding two friends to the band, which promises to bolster their performance and it give it a different flair. Be there early to see this new incarnation of a group we already dig.

A wonderful, sensory roots music experience, Nellie Pearl, is a Louisville based band on the rise. Word is they’ve been dominating their local scene, and are itching to push out into new, equally vibrant scenes. Get hip below, before you hear them on NPR.

Equal parts Americana, blues, folk, and singer songwriter, Chicago area native Sara Syms’ debut album, Fade to Blue, is worth several listens, and you can do so below. Enjoy, and get to the venue in time to make her feel at home in Music City.

The Beech Benders, The Western Shore, Nellie Pearl, and Sara Syms will perform TONIGHT at The East Room. The show begins at 8 pm (doors at 7:30), and tickets are available at the door for just $5.