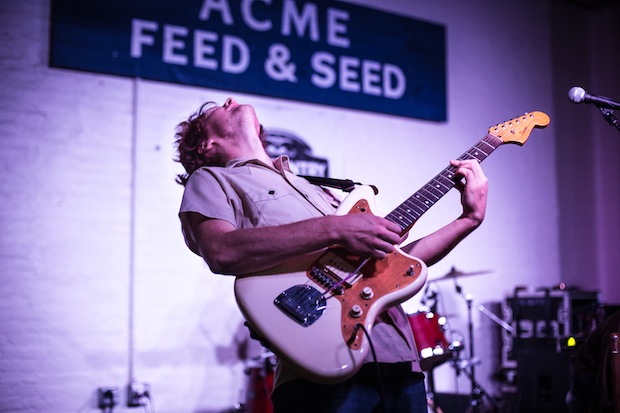 Seriously now, who doesn’t dig a free show? Every Tuesday at 8 p.m., No Country teams up with one of Nashville’s newest downtown establishments, Acme Feed & Seed, to bring some killer non-country acts to the broadway strip. Finally, a reason for us locals to venture back to that (in)famous street! This week, the old warehouse was emitting some serious surf-rock vibes from its doors, which must have turned the heads of every cowboy boot wearing tourist in the area. The Beech Benders and The Reneaus made waves, to say the least, and we’ve got the whole story with photos right here after the jump. 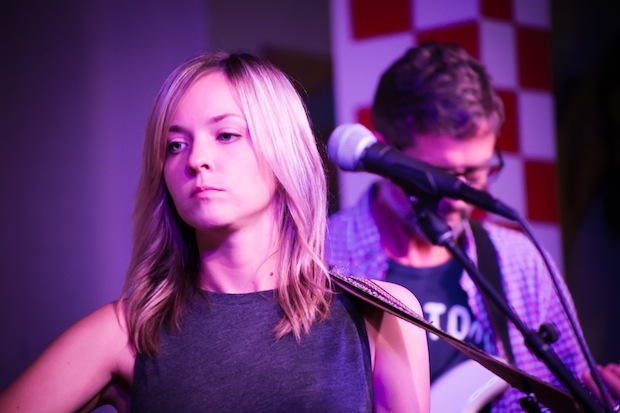 The Reneaus. Photo by Matt Cairns.

We walked into the venue at around 7:45 to hang our banner and proudly plant our stake in the name of No Country, and for the first time in my attendance, there wasn’t a surplus of seats at a table to pick from! It was still easy to find one, but we were stoked to see that word is getting out about the weekly event. Five musicians strolled onto the stage with an old looking grandma’s church style keyboard frame with The Reneaus written in yellow on the wooden backboard. Within their first song, I knew immediately that I would have a hard time describing their sound. They are a concoction of different styles rolled up into a beautifully wrought piece of art. Stephen “Fizzy” Page, the lead guitarist, is a wizard of the whammy bar and has some obvious surf rock influence with that iconic flange coming from his amp, but somehow the band’s instrumental sound screamed blues. To top off this banana sundae, frontwoman Ashley’s voice was smooth and dreamy like Llene Woods or Zoe Deschanel with just the faintest hint of a southern accent. Better yet, we couldn’t shake comparing her voice to that gorgeous tune from Disney’s Robin Hood. That’s right, she knocked us all the way back to 1st grade. We  found ourselves rendered especially charmed when the band slowed things down and she sang us a love song called “Drift Away.” Another awesome tune on the setlist to look out for is “Fools,” which can be found with an impressive music video on their website here.

The Reneaus are a family band and they usually consist of six members but, in a short convo with Fizzy after the set, we learned that their violinist has just left for college. On a more exciting note, Fizzy mentioned that he is officially moving to Nashville, so hopefully we’ll be hearing his jams around town more often. 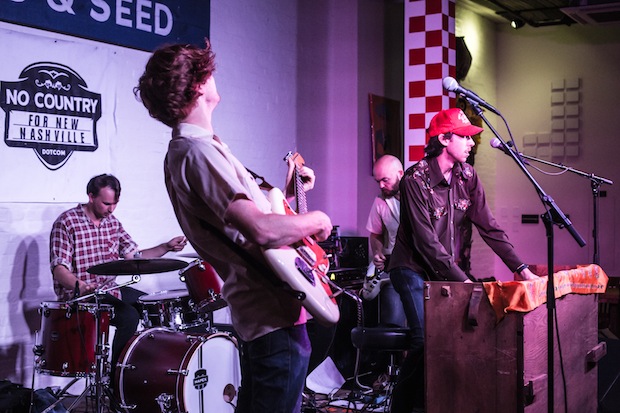 When the headliners took the stage, we were delighted to see a familiar face standing center. Beau Brummel, of Nashville’s ELEL is the keyboardist and personality of the surf-rock band The Beech Benders. We had the pleasure of seeing ELEL open for Alanna Royal at Exit/In last weekend and Brummel brought all of the energy and humor we saw during that epic show to Acme. Speaking of familiar faces, The Reneaus’ Fizzy and David Page (brothers) are one half of the four piece. The band is mostly instrumental, with the exception of Brummel’s comedic interjections like “that’s how you do it”, and the setlist is about 50/50 covers and originals. They put their own flavor on classics like Bob Dylan’s “Lay, Lady, Lay”, “Flipside” by The Breeders, “Daytripper” (duh), and The Ventures’ surf-staple “Pipeline.” In comparison to his role in The Reneaus, Fizzy went full beast mode. He went into trances possessed by the rock gods widening his stance and shaking his head like a wet dog, and Brummel would reach two open hands toward him as if to say “BEHOLD!!!” Scribbling our notes on an old receipt and snapping off photos became a bit more difficult when we were compelled to dance. Brummel was obviously having a good time, and his positive vibes spread like a fever. While Fizzy shredded, Beau pantomimed, driving his keyboard like a car, and danced around the audience as the most enthusiastic triangle player I’ve ever seen. Later in the set, he called for the lights to be turned down to spooky low, put on a headlamp, and said “We must beat the Catbug”. Could he have been referring to the pesky feline insect with a child’s voice that shaves off the eyebrows of unsuspecting sleepers? We’re not sure. But anyway, check out their song “Rock and Tug” and our photo gallery below for a better idea.