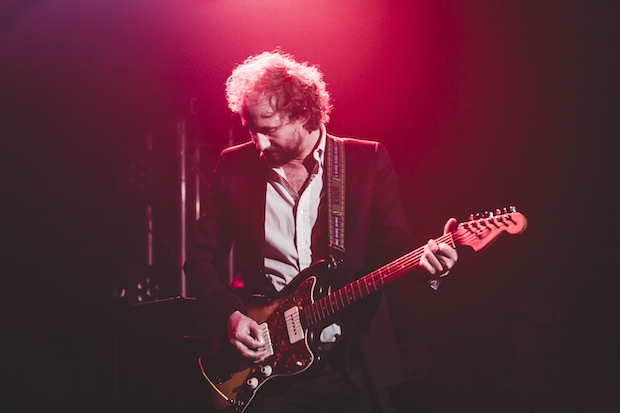 Hopefully you were able to partake in Phosphorescent’s amazing solo, indie Americana auditory excursion at Exit/ In on January 29th, but if you missed out, it’s OK. We have a full recap for you after the break and some nifty photos from contributing photographer Jake Giles Netter. Throw in local alt-folksters Boom Forest and Austin, TX formed ambient indie rockers Lord Buffalo, and it was a night well worth documentation. If you were there, you alllllllready know, but if you don’t believe us, please feel free to have your mind changed after the jump.

We got to the Redbull Sound Select Presents showcase just in time to order a beer, and find a spot in the sizable crowd for the first band, Lord Buffalo. Lead singer D.J. Pruitt had an amazing beard and long, curled, flowing locks; his look matched his Jim James (of My Morning Jacket fame) vocalizing styles. However, their music was much more atmospheric, less rock/jam than MMJ. The violin player added volume and substance to the spaced out instrumental portions of their songs. Strong folk elements were peppered in with an abstract song writing style. They played in three or four song spurts, one flowing into the next, and we were pretty much hooked by the second mini-set of tunes. 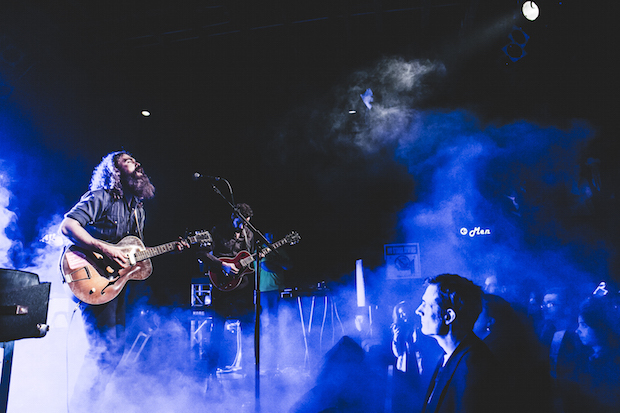 The crowd, which was continuing to grow, seemed impressed too. By the time they’d finished, I was sure they amassed a sizable amount of new fans, ourselves included. We stepped out for a smoke, and talked about the finer (or less fine) points of Rolling Stone magazine with an intelligent, but slightly-over-the-hill, Widespread Panic “wook”. The conversation took a hard left, and he started in on the whole ‘don’t waste your youth’ bit, so we went back inside. 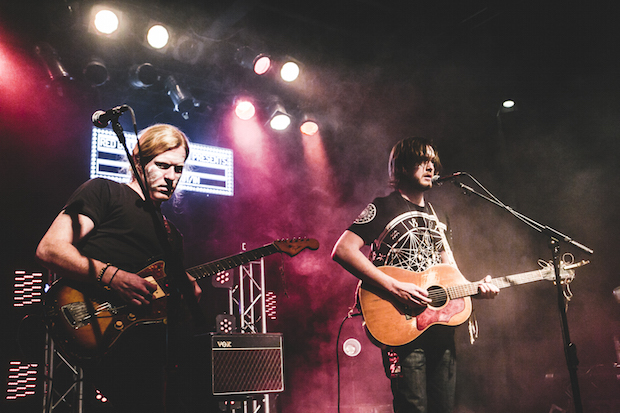 I’d caught some of Boom Forest‘s warm-up set for a Langhorne Slim show a few months back, but I was eager to see what they’d added to their repertoire since. They came out, just two of them, white face paint blazing. One electric guitar, the other acoustic, and some super chill Bon Iver-ish songs to start. Soon enough they were raving up, frontman/mastermind John Paul Roney, strumming his beautifully battered acoustic like a mad man, hopping around and shaking his hair from side to side. I was super into the intensity of their original song “Shadow of Doubt”, and when they slid into a seamless cover of Radiohead’s “Airbag”, the crowd got way into it. Never underestimate the power of a well timed, AND well performed cover. After they asked the crowd to take a vote, we all settled on one more ‘foot-stomper’ to close it out. Please get hip now, because these local guys have talent in spades. 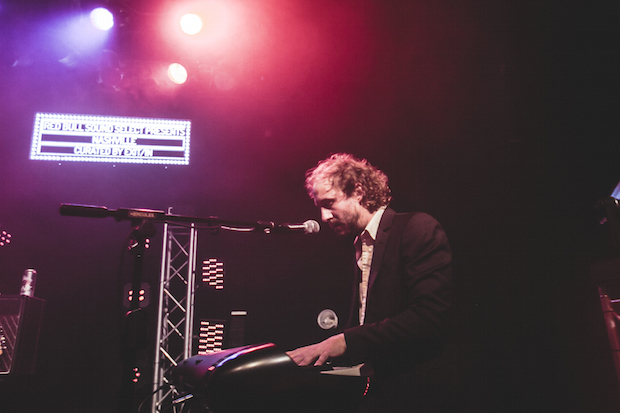 Soon enough it was time for the man of the hour, Phosphorescent. I’ve been a fan of his music for awhile, but I was very curious to see what he would do with a whole stage all to himself. He came out to cheers and waved. After saying hello, and thanking everyone for coming, he had to fiddle with his mic stand for a second before getting down to it. Two of his heartbreakingly poignant songs later, and I was starting to feel that religious feeling we all sometimes feel at shows. When something in the music touches you deeply, chills ripple over your skin and you get that funny feeling in your gut. After each breath he took, you could hear a pin drop. The crowd was as quiet as I’d ever heard at Exit/ In.  In respect and total awe of one man, and in that one moment we were all sharing.

Well, one man, his classic Fender, some peddles, a badass Vox amp that made his strings sing in chorus, a fog machine and some cool laser lights. He played pretty much everything I, and most diehards, wanted to hear including some deeper cuts like “Wolves” … probably the highlight for me. He also did a super trippy cover of Tom Petty’s “Won’t Back Down,” looping his own voice, via his gear, into a haunting harmony, and adding heavy guitar distortion too. At one point the track was still on a loop, and he hopped down into the crowd with his mic, stepping up to people at random and letting them sing the simple hook, “Stand my ground/Won’t back down,” for all of us to hear over the PA. Eventually he made his way to me and shoved the microphone into my face. Here it was, my big chance to be ‘famous’ … and I fucking forgot the lyrics.

He gave me that ‘come on man’ look, mouthing the words, and I managed to blurt them out before he moved on. Needless to say, I’ll stick to writing and leave the singing for the pros. He switched to the keys for a song or two, and later, for his encore, he brought out a gal to accompany him on keys while he strummed. They played an awesome Willie Nelson classic, “Hand’s On The Wheel,” which, funny enough, isn’t on an album Phosphorescent did of all Willie songs. They closed with “Song For Zula” and it was pretty much perfect; a wonderful start to 2015. Be sure to check out Jake Giles Netter’s photos below, and if you haven’t already, get Phosphorescent in your life, ASAP.