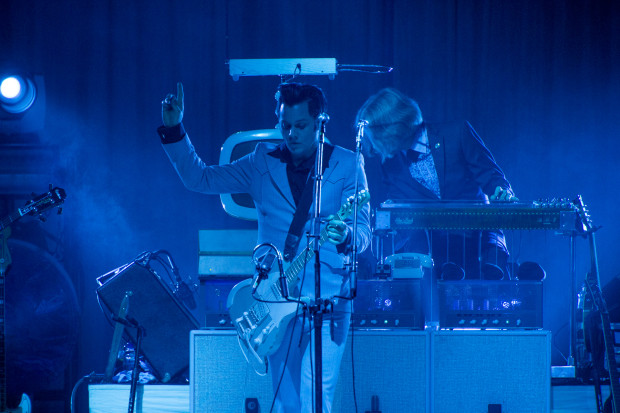 On Wednesday evening, Jack White played the first Nashville show since the release of his sophomore solo album, Lazaretto last summer, not counting his epic set at last year’s Bonnaroo. White did not disappoint the adopted hometown crowd, giving us Nashvillians a historic set which, during its blistering two-plus hours, featured the only concert performance White and country music legend Loretta Lynn have ever given together since White helped revived her career by producing 2004’s Van Lear Rose. If that wasn’t enough, just before Lynn joined White onstage, there was also a surprise performance from Jack’s first side project outside The White Stripes, The Raconteurs. I know January’s not even over, but if you weren’t at Bridgestone Arena on Wednesday, then you missed what will go down as the biggest show of the year (unless Jack manages to get Meg to join him onstage at the next one- don’t hold your breath).

Click through to read me waxing poetic about this, plus see some photos. 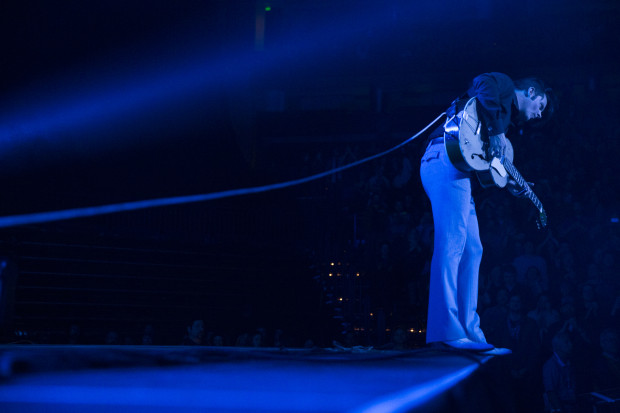 Local guitarist and songwriter William Tyler opened the evening with his solo instrumental guitar work, a type of music and performance that wouldn’t likely ever have made it to a venue the size of the Bridgestone without White’s doing. Tyler is a Nashville native, and he said he was honored to be chosen to open for such musical icons as White and Lynn. After his short set of several instrumentals, Lynn took the stage in a sequined gown to perform her hits and, for close to an hour, Bridgestone felt like a super-sized Broadway honky-tonk. The 82-year-old showed signs of her age by occasionally forgetting the lyrics, needing to sit down partway through the set, and complaining that her nose was “runnin’ like a freight train.” These aspects were also present in her performance I caught at Bonnaroo three and a half years ago, but like any hard-working country singer the octogenarian keeps on touring. She also teased us about White coming out to sing with her, just as she did at Bonnaroo three years ago, and reminded everyone that this was the first time the two had ever played a show together.

The chance to see the country music legend perform songs like “I’m A Honky Tonk Girl,” “The Pill,” “You Ain’t Woman Enough (To Take My Man),” and “Fist City” is one that might not be around for much longer. Lynn’s songwriting is unparalleled, White would go on to call her “the greatest female singer-songwriter of the 20th century” later in the evening. Seeing someone who had such a big influence on White’s early career — dedicating the White Stripes’ third album and breakout White Blood Cells to Lynn is what would lead to them working together later — would have been a treat for even those fans of White who aren’t as obsessed by country music’s tradition of strong female singer-songwriters as I. 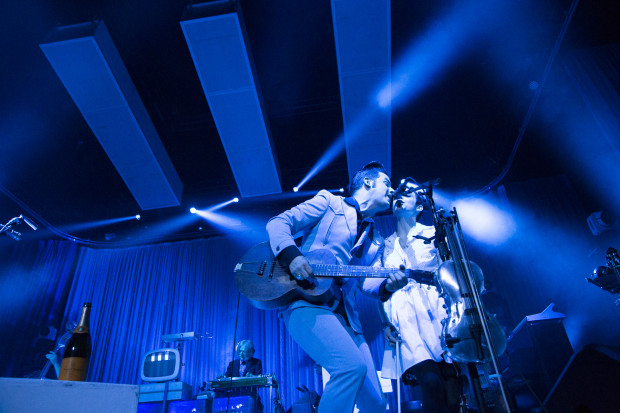 Anyone who saw Jack at Bonnaroo knows that the band he’s pulled together to tour in support of Lazaretto is so good they’d be one of the best rock bands touring right now even without him. White famously never uses a set list, and has embraced his role as a band leader during this tour, dashing around to whisper the title of the next song in the ears of his bandmates and using the neck of his guitar like a conductor uses a baton. Drummer Daru Jones stretches the boundaries of the term powerhouse and Lillie Mae Rische and Fats Kaplin make dueling fiddles more rock and roll than dueling fiddles have ever been. Dead Weather and Queens of the Stone Age member and sometimes-Raconteur Dean Fertita filled in for the late Ikey Owens on keys, leaving likely more than just me hoping that the promised Dead Weather reunion this year isn’t just a tease.

White played songs from each of his solo records, The White Stripes, and The Raconteurs during the first hour-long set. I’ve seen the rocker live with the Stripes once and several times with each of his other projects, and, between this and the set at Bonnaroo last year, he seems either genuinely happy or like he’s just not afraid of looking happy onstage anymore. White has been called one of the last true rock stars, and I’ll take that claim if we’re defining rock star in Bob Dylan terms and not Axl Rose terms. He has the ego and the audacity to do whatever the fuck he wants and what he’s done for this city’s music scene is incalculable. White could bide his time sitting on the front porch of his mansion counting his money, but, instead, he’s built Third Man into one of the most artistically important entities around and promoted records by both forgotten blues singers of a century ago and new bands that would never have otherwise been heard. Any indie kid in Nashville who claims to like rock and roll and yet complains about how “uncool” Third Man is should be relegated to spending every evening listening to covers of “Achy Breaky Heart” on Broadway. 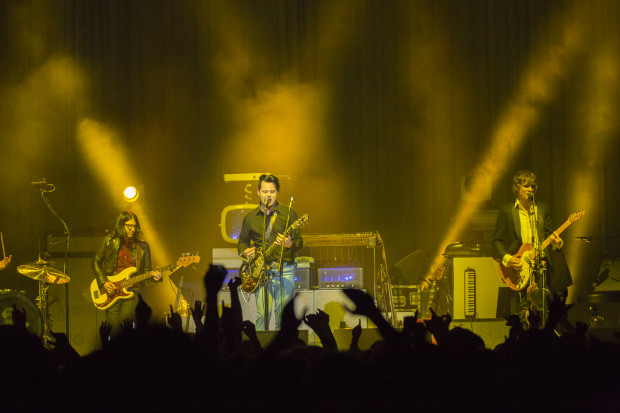 All that intelligence, all that punk rock confidence, all that knowledge of music history and tradition, is obvious from the second he stalks onstage. The show kicked off with the Stripes classic “Dead Leaves and the Dirty Ground” before going into three cuts from Lazaretto, including the instrumental “High Ball Stepper,” the title track, and the duet with Rische “Temporary Ground.” Other Stripes songs in the set included versions of “Hotel Yorba” and “We’re Gonna Be Friends,” which were grounded in the folk and country traditions they come out of by Kaplin and Rische. White sat at the piano to play the Blind Willie McTell riff “Three Women” and the first part of the show closed with The Raconteurs’ “Top Yourself.”

After a short intermission, one of White’s roadies came out onstage to announce that The Raconteurs would be our encore entertainment. The group hasn’t released an album since 2008 or played a show in almost five years, and guitarist Brendan Benson gave an interview to Billboard last spring saying that a third record from the group is “kind of off the table,” so the appearance was a definite surprise. Daru Jones filled in on the drums, but Jack Lawrence (also of The Dead Weather), Brendan Benson, and Dean Fertita were all there to play “Salute Your Solution” and the hit “Steady As She Goes.” Members of The Raconteurs worked on Van Lear Rose — with Jack Lawrence playing bass on the record, Benson acting as an engineer, and drummer Patrick Keeler doing percussion on it — so it was a natural transition to have Benson go backstage and walk Lynn out to the opening notes of “Portland, OR.” 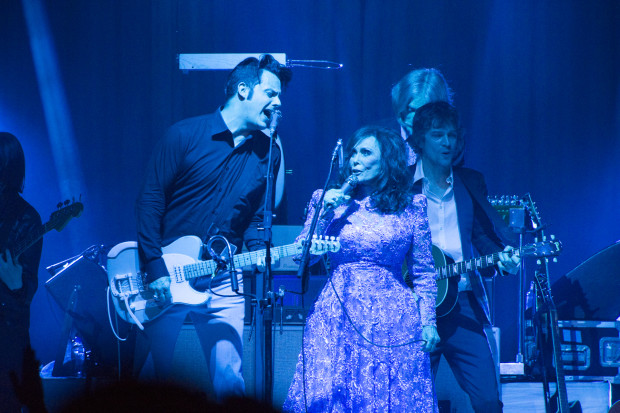 The most memorable, historic, and truly Nashville moment of the show was Lynn and White’s flirty duet from the Grammy-winning Van Lear Rose. Recording that album with Lynn was really what put White on the map as a producer, and one could argue a big impetus for him moving to Nashville and opening Third Man Records. The only other time the pair have played the song live was on Letterman, back when Van Lear Rose came out, and this show is the first and, possibly, last time they’ll ever perform together in front of a live audience. The other song the pair sang was the B-side off of Lynn’s very first record and the second song she ever wrote, “Whispering Sea.” Lynn told the crowd that she hadn’t sung the song in 50 years: “not since I wrote it.” Bringing together Jack White’s alternative rock god with Lynn’s honky-tonk legend was the perfect representation of what makes Nashville such a unique and important place for music. Everyone at the Bridgestone Arena on that night witnessed a historically significant and beautiful moment in music that couldn’t be repeated anywhere else.

After Lynn left the stage, White finished the set hard with Lazaretto’s tongue-twister “The Black Bat Licorice,” Blunderbuss’ “Sixteen Saltines,” and the Stripes blues classic “Ball and a Biscuit,” a song that could get you pregnant even when he has to switch guitars three times during it. After a screaming version of the Stripes’ “Slowly Turning Into You,” the evening closed with a song that White seems more than happy to let define him, “Seven Nation Army.” The crowd began chanting the melody before he even picked up the Kay to play it, either completely differently from or exactly like they do during the Predators games in that same space.