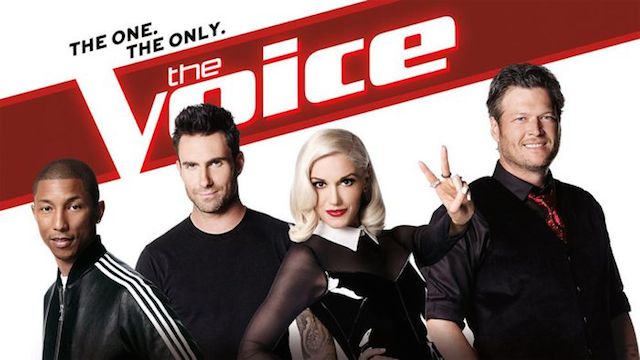 Alright, maybe I’m growing soft and bordering on normcore to admit this… but dudes, I’m totally sucked into NBC’s The Voice this season. Having never paid attention to it before, I found myself lingering a little too long during a routine channel shuffle. Admittedly, at first I was stunned to a stop by Gwen Stefani‘s perfect, porcelain visage that refuses to register the past twenty years in her ageless complexion… but then I found myself truly transfixed by the raw authenticity of these hopefuls pouring their hearts out to the backs of these giant, red, Bond-villian-like chairs.

Strange times, for sure, friends… but something grabbed me. As the “blind” auditions progressed, I was shocked by just how many of these participants were our actual neighbors. No less than five of the artists continuing on to this week’s battle rounds were from Nashville and the surrounding areas. Sure, we had a fair share of country crooners in the mix hand-picked by Blake Shelton (Taylor Brashears, Kensington Moore, and Craig Wayne Boyd) but we also heard a range of sounds represented by Daniel Griffin coached by Pharrell and Joe Kirk on team Adam Levine. Not to mention there are tons of other contestants with local ties — both those born and trained in our midst.

While some may scoff at shows like America’s Got Talent (Emily West was robbed – see why!) and The Voice as trite and formulaic, pedestrian at best… the reality of this reality tv genre is that with the current music industry climate as is, it’s harder and harder for artists to break through to the big time and The Voice makes a concerted effort to put the talent at the forefront while explicitly considering diversity as a valuable asset in its performers — and that’s something worth our time, especially if you can root for a hometown hero!

So take the jump with us this week and get to know the performers from Music City trying to break big on this season’s The Voice.

And Kensington’s studio version of OneRepublic’s “Love Runs Out”

From the blind auditions: Taylor Brashears does Loretta Lynn’s classic, “You Ain’t Woman Enough (To Take My Man)”

Also notable is Jonathan Wyndham who, while defeated and going home this week, gave a strong audition and is said to be studying commercial songwriting at MTSU, calling Nashville his current locale on Twitter. He was hailed in this week’s battle as “the Nashville music student”…

AND Jean Kelley (known around these parts as Kelley Duggan) is an MTSU Music Business grad who is originally from Brentwood but now living in Atlanta. She was named Miss MTSU 2007 and competed in the Miss TN pageant. This week she battled Sugar Joans in a show-stopper Destiny’s Child’S “Survivor” cover… and while she didn’t win the battle, she was stolen for team Adam and then again by Pharrell and will continue on in the competition….

And finally — a battle of the thrice-named as local Craig Wayne Boyd goes up against James David Carter in a true country duet… Craig doesn’t win the battle… but suddenly, out of seemingly nowhere, Gwen saves him!

It makes perfect sense that Nashville would dominate on a show that focuses on the best raw musical talent around and we’ll keep you posted on how our hopefuls are faring this season, even if it means taking a hit to our coolness cred. We’ll be watching regardless if it’s a little silly because it reminds us that Music City has a special sort of star-making alchemy, it’s a place where people still come, suitcase in hand, with a dream to make something meaningful.

Oh and one more thing while we’re dorking out… if this is true, I’m out after this singular, magical season. Team Gwen forever… even if there are some legit points raised here about the presentation of one’s gender (okay.. so maybe two more things… it’s diversion day after all!)