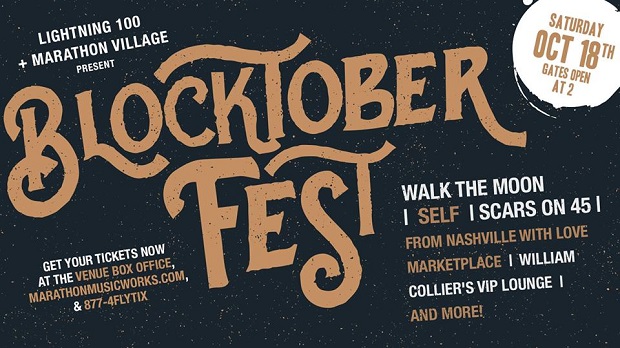 First announced at Live On the Green this year by our pals over at Lightning 100, we couldn’t wait to get back to a computer to tell you about the incredible mini festival that is sure to be the highlight of your October.  Blocktober Fest features an action packed lineup that includes the likes of indie rockers Walk The Moon, prolific local musician Matt Mahaffey’s sElf, English stand outs Scars On 45, and local blog favorites Vinyl Thief, Boom Forest, *repeat repeat, and Tristen.

On Saturday October 18th, the doors open up over at Marathon Music Works at 2pm, and the music gets going around 3pm.  This all day event will also feature a local marketplace curated by From Nashville With Love.  General admission tickets are available for only $10, but you can treat yourself with a VIP experience at William Colliers for $75.  Read on for a bit more on all of the acts, and, one lucky reader, will win a pair of tickets for Blocktober Fest!

Cincinatti bred Walk The Moon burst out of the Ohio club scene with their track “Anna Sun”, and they haven’t looked back.  Incessant touring has led to an ever expanding fan base, and slots at mega festivals.  We actually saw them at Bonnaroo a couple of years ago, and were equally impressed with their set of originals as we were with their Talking Heads cover band set at the tiny Sonic Stage.  They’ve since headed back into the studio to record some new tracks, and, if they are anything like the aptly titled “Shut Up And Dance”, we are in for a real treat at Blocktober Fest!

Matt Mahaffey is on a long list of under recognized Nashville musicians.  His project sElf is just a piece of what the talented producer and multi-instrumentalist busies himself with.  His scores have led to commercials, movies, and television show placements, and he has been influentially linked to one of our favorite musicians, Beck.  He is currently touring in support of his recently released album Super Fake Nice that dropped on July 29th.  You can check out the first single from that release below.

After their breakout self-titled debut, Leeds, England based Scars On 45 quickly garnered the attention of the music media and their sounds jumped the pond with an appearance on The Tonight Show.  The pop inspired rockers are now gearing up to release their sophomore follow up, Safety In Numbers, due out on October 7th.  You can have a listen to the first single “Crazy For You” below.

If you’ve spent any time reading this digital tome, you know how we feel about Vinyl Thief.  If you haven’t seen them live, you are probably not a fan of music.  Their high energy electro rock is something that you can begin to experience in their July release Fathoms, but their live show is really where the magic happens.  Have a listen to “Middle Of The Night” below to get a taste of what the hub bub is all about.

Continuing the trend of up and coming bad ass local bands, Boom Forest is a perfect fit for this eclectic bill.  We caught them recently when they opened for Langhorne Slim at The Basement, and were taken in by their experimental folk rock vibes not to mention interesting face paint.  Have a listen to the track “Shadow Of Doubt” below for American Songwriter that features a little help from Phox and Foreign Fields.

Poppy surf splashed rockers *repeat repeat have been making waves since the release of their debut full length Bad Latitude earlier this year.  Since the album drop, they’ve been busy touring (including a pretty special evening with us at Acme) and have been working on their follow up album.  We hope to hear some new tracks from that forthcoming release when we get our next chance to see them at Blocktober Fest.  In the meantime though, you can check out the playful lyric video for “Chemical Reaction” below.

Local songstress turned indie pop goddess, Tristen is a hot number to have on a bill these days, and we’re thrilled that she was a late addition to this killer gig.  Touring in support of her standout release, CAVES, last year, we just haven’t been able to get enough of Tristen.  We’ll update you with set times as the event approaches, but, in the slim chance that she is opening this event up, you should make a point to get there when the doors open.

Winner will be announced Monday, Oct. 13, at 12 p.m. CDT, and will receive one pair of tickets. Good luck!