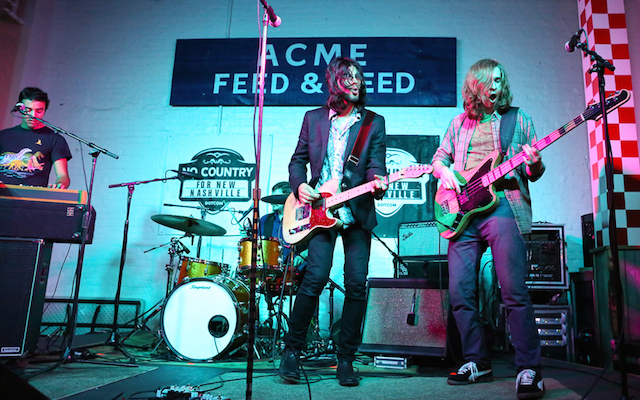 For the last several weeks, our live events wing, No Country Presents, has been working with the fine folks over at Acme Feed and Seed to put together a weekly showcase featuring some of Nashville’s finest homegrown musical talent. So far, the event has been a lot of fun, and last night proved to be no exception. We got a chance to witness the musical talents of Willie and the Giant and Moon Age, both of whom proved that Nashville has some of the finest talent in the country. We’ve got an in depth review of the show after the jump, as well some splendid photos by Michael Brooks, so go ahead and click on through. Also, don’t forget that Marquee Mayfield and the Mr. Moons will be playing next week’s showcase, which will, as always, be free to the public.

On the off chance that you managed not to step outside on Tuesday, it rained a decent bit throughout the day, and Broadway was occupied by only a handful of brave souls, a few stubborn tourists, and your humble author. The streets of Broadway glimmered with the technicolored hues of the scores of neon signs, but the damp demeanor was not allowed inside of Acme Feed and Seed. In stark contrast to the outside world, the bar/eatery presented a very warm and inviting atmosphere, and friends new and old were catching up with each other when the evening’s first act, Willie and the Giant, stepped on to the downstairs stage.

This local four piece are blessed with a very strong, classic rock presence that fits quite nicely into the scene here in Nashville. Sonically, the group provide a firm yet grooving rock presence; the classic double guitar, bass, and drums set up works just as well as always, and the group’s tendency to change vocalists every few songs helps to keep the set fresh through its entirety. One thing that’s definitely worth noting about this band is their ability to completely rock out; several songs during their set featured balls out solos that stunned the crowd. Talented emerging acts like this are the reason that Nashville earned itself the nickname Music City. Willie and the Giant will be dropping a new single next Tuesday, Sept. 9, and we definitely recommend checking it out.

The crowd had grown steadily throughout Willie and the Giant’s set and the gap between bands, and by the time the second act, Moon Age, the room was nicely filled. Much like Willie and the Giant, Moon Age are a fine example of the better side of local rock. Perhaps the most impressive part of Moon Age is the emotional range the band employed throughout the set. From faster, rock songs to more thoughtful and even angry tracks, the five-piece (though only four last night) thoroughly explored a range of motifs, a pursuit that lent a very personal touch to their tunes. This went over quite nicely with the audience, in our opinion. Moon Age are definitely an act that are going somewhere, so be sure to keep an eye on this fantastic band as they move towards a promising future.

All in all, the show was definitely a great time, but let’s try to top it next week with Marquee Mayfield and the Mr. Moons. See y’all Tuesday at Acme!