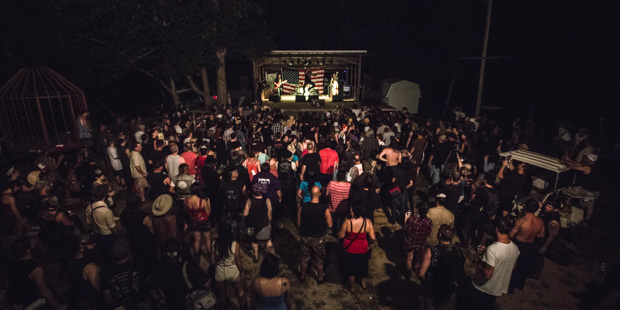 Labor Day, that special time of year that always seems to inspire a deluge of rain which means that Muddy Roots Music Festival in Cookeville, TN will stay true to its name. It is unlikely that any storm could keep these dedicated festival-goers down – Muddy Roots is a community, hanging out together and enjoying the music that they love. People get married (in front of huge banjo sign propped up by a porta-potty), they share their moonshine, and you’ll never meet a stranger. The only rule at the Junebug Boogie Ranch is “Don’t be a JERK.”

This was our third year to attend the Muddy Roots Music Festival, the brain child of East-Nashvillian Jason Galaz. This year’s festival boasted a broad range of bands (spanning from traditional bluegrass all the way up to ’90s grunge) but managed to stay true to its Americana roots. Check out below for our thoughts and photos from Sundel Perry. 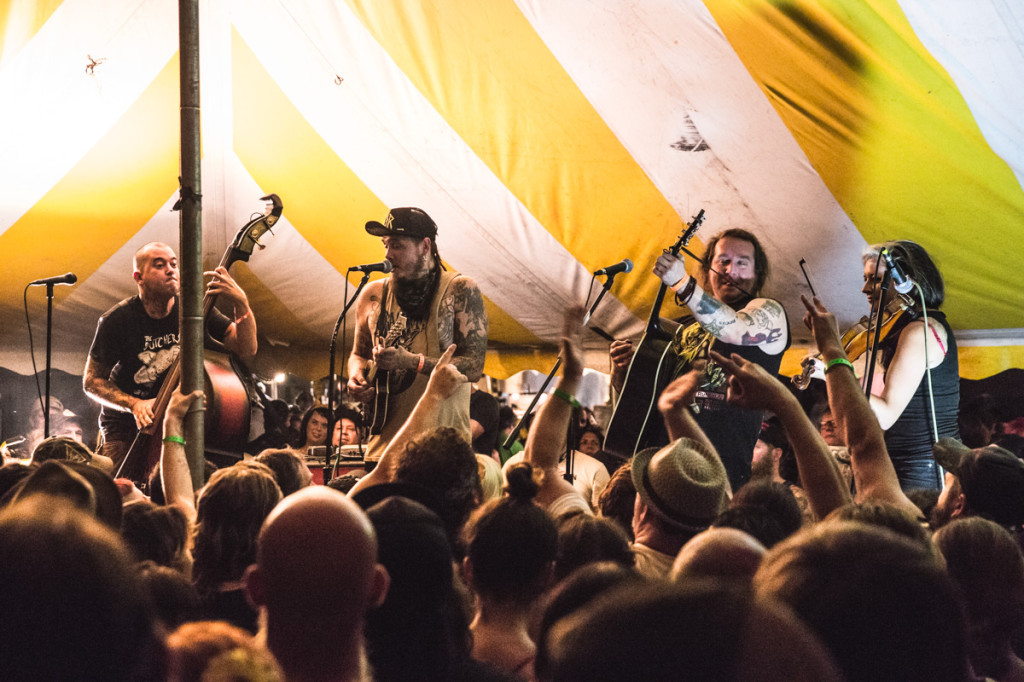 We rolled in late on Thursday evening just in time to catch Woody Pines before they took the stage. They were excited to be a part of the festival, and it showed in their energetic performance. The crowd was considerably smaller than it would be later in the weekend, but you couldn’t tell it from its energy. Plus by the time Jake Orvis & the Broken Band took the stage, the Cracker Swamp Stage tent was packed. It was their last performance as a band, so there was an extra sentimental vibe on top of what has always been a great band to see. With the 2 scheduled bands done and 3 more nights of testing our music festival endurance, we decided to pack in for the night. Just as we were getting settled at the campsite, we heard the tasty licks and driving beats of one-man-band Gator Nate rocking out at his site near us. We were very excited not only to find a new great musician, but we made a good buddy to hang with at the festival. 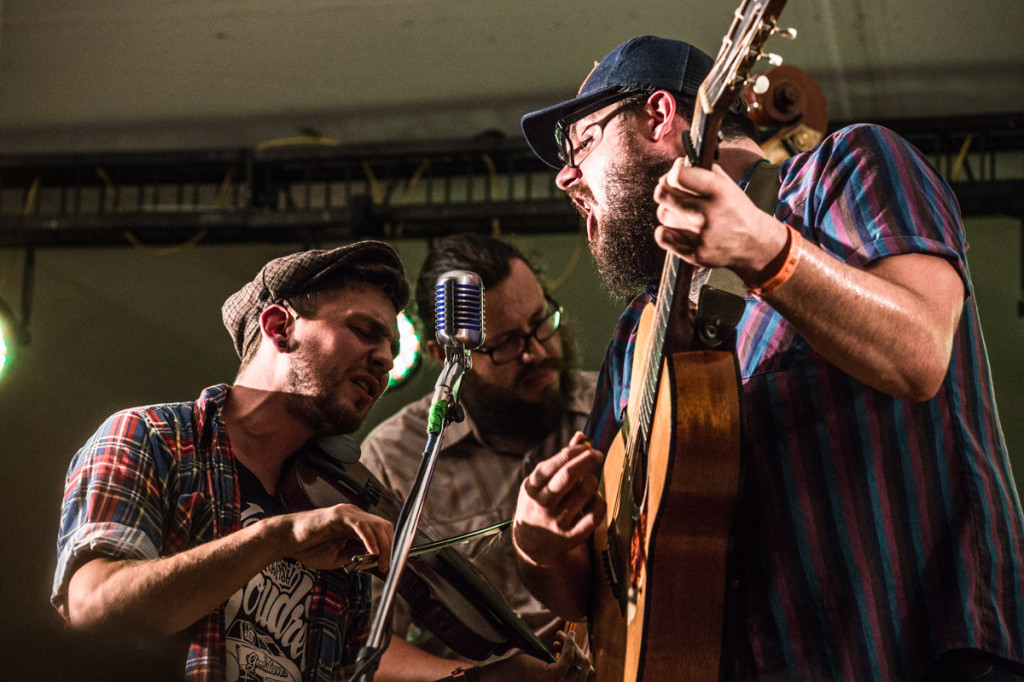 We got a slow start Friday morning, but we made it out to catch the rastabilly skunkgrass of the Mad Polecats. You might be asking, “What is rastabilly skunkgrass, exactly?” The best we can figure, it’s a combination of reggae, rockabilly, blues, and bluegrass. Maybe some other elements, but we couldn’t easily pick them out. Somehow they make it work really well. Next we caught the sweet rockabilly of the Buzz Jumpers. Before long the sun had already set, and it was time for the psychobilly greats Hellfire Revival. Then on to Hillbilly Casino who are a firm crowd favorite, and this year their song PBR rang especially true as the blue-ribbon winner was a sponsor of the festival. After that we caught another Muddy Roots staple, The Tillers, with their excellent songwriting, solid bluegrass chops and outstanding vocal harmonies. 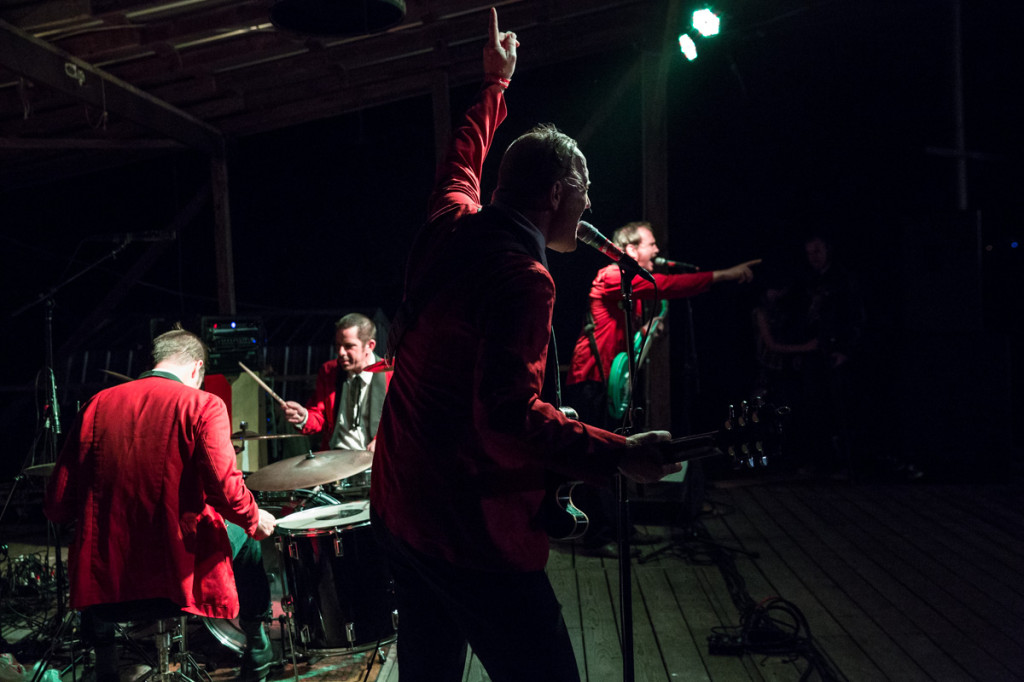 One of the great things about Muddy Roots is the reasonable size. We spent all day and night bouncing among the stages to see all these great bands, but we never felt like we were walking very far. It also helped that there was loads of people-watching to do and about a dozen different vendors set up between the stages. The Sonics came up next, and they really surprised us. We were not very familiar with them before the festival, but their bluesy rock n’ roll sound drew us in hard. Then came one of our old favorites, Pokey Lafarge, whose polished sound and energetic band kept us nodding and singing along for the whole set. Wrapping up the night was Swiss garage rockers The Monsters. Fronted by Reverend Beatman and backed up by bass and dual drummers, this rifftastic groovefest wound us up so much, we didn’t go to bed for hours (probably 4-ish). 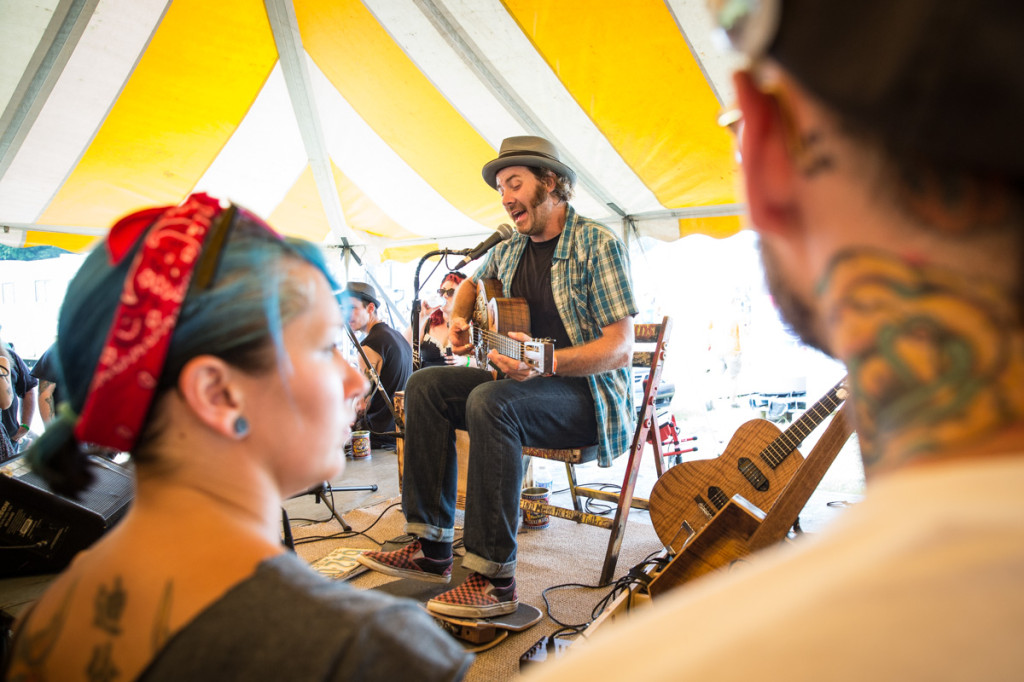 We slept as late Saturday morning as the sun would allow, but we still had plenty of time to catch Lou Shields with his vocals, harmonica, and guitar that says country blues and homemade skateboard percussion instruments that say radical rhythms. After that we caught the Misery Jackals for some punkgrass and Lonewolf OMB (one man band) for another take on mountain punk. 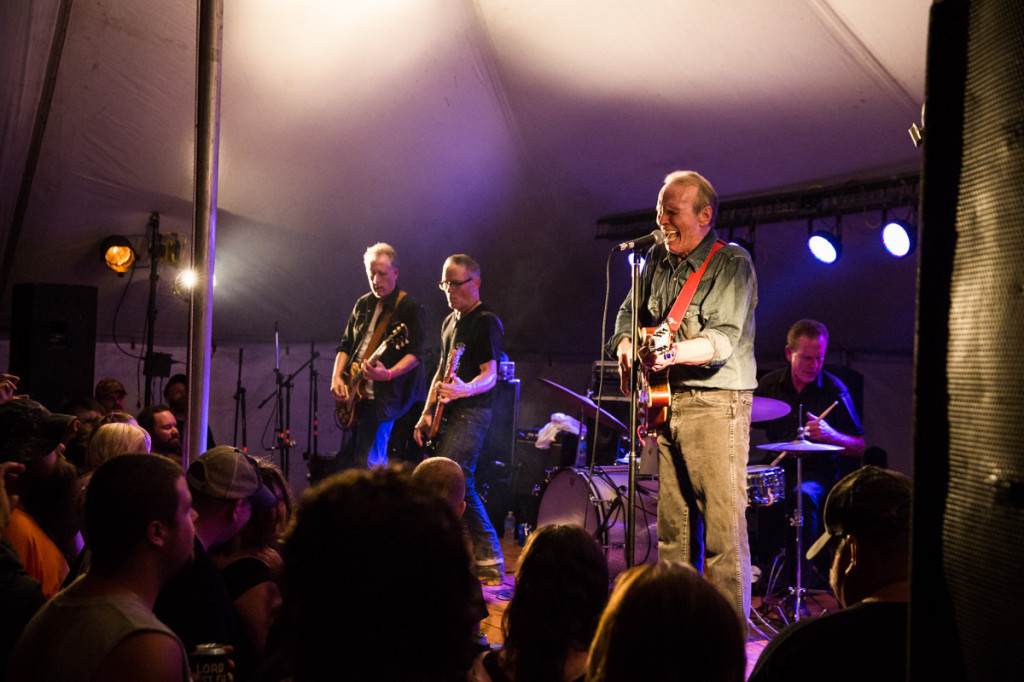 We took a break back at the campsite during the second rain of the day, but we were roused when we heard The Blasters rocking out all the way across the property. We gravitated to the stage and really, really enjoyed their show. The big Ol’ Wood Stage was rained out for the evening, so we hung around the Trailer Stage until Mudhoney came on. They brought the rock again just like last year at Third Man’s Blue Room. 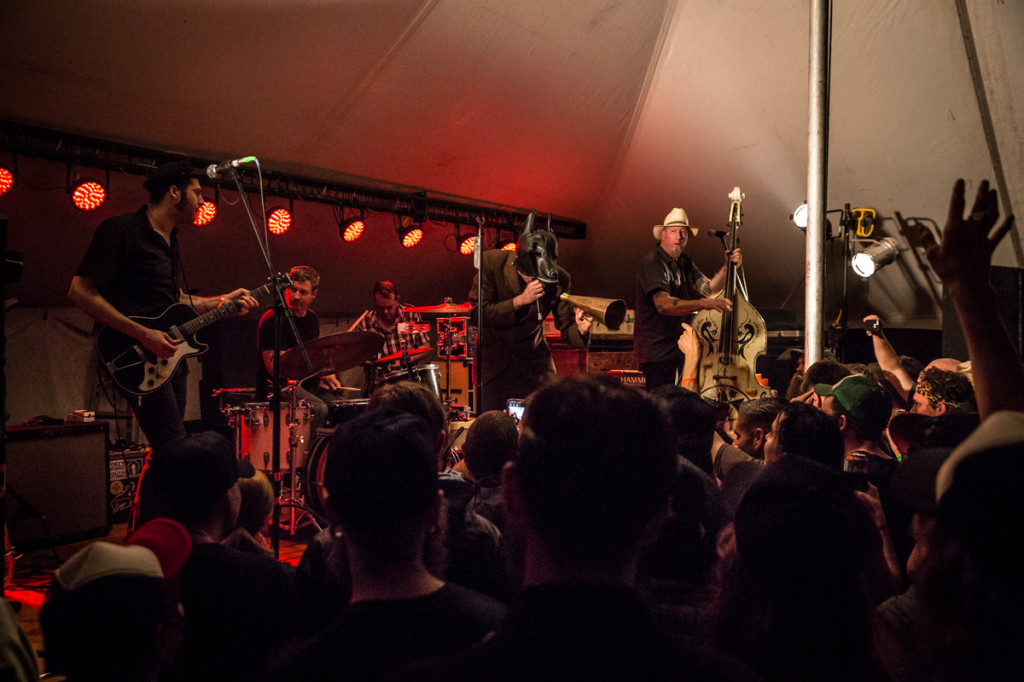 The last act of the night was The Legendary Shack Shakers, and it’s a good thing because they would be a tough act to follow. Their rock n’ roll/punk hybrid is great to listen to, and front man JD Wilkes is a wild man on stage. He was all over the place – crowdsurfing, climbing the tent pole, and wearing hats he grabbed from the crowd. It was a lot of fun to watch. 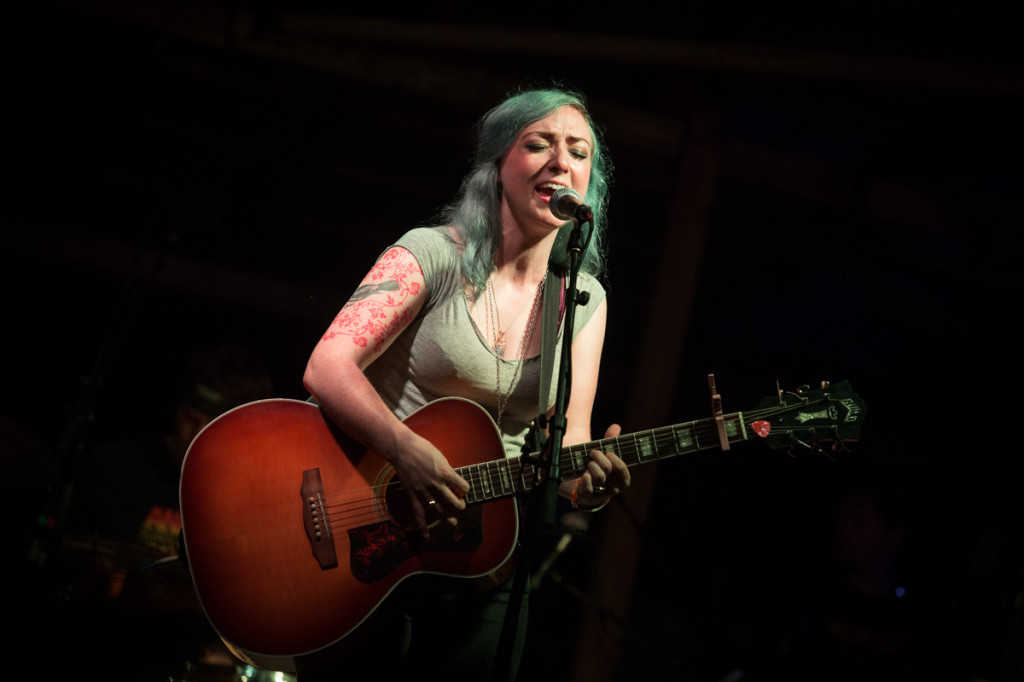 By the time Sunday morning came around, we were getting more accustomed to the sun blasting our tent, so we slept all the way to 9:30. We pulled ourselves together and rejoined the world of the living in time to catch Rachel Kate filling in on the big stage. Her brand of folk music has an enchanting, edgy rock feel that draws us in. Afterwards, we made our way over to Terry “Harmonica” Bean, one of three Mississippi bluesmen performing at the festival. He piqued our interest with his recordings online, and he did not fail to deliver in person. A little later we made our way to see Rachel Brooke performing some raw, exciting country music. 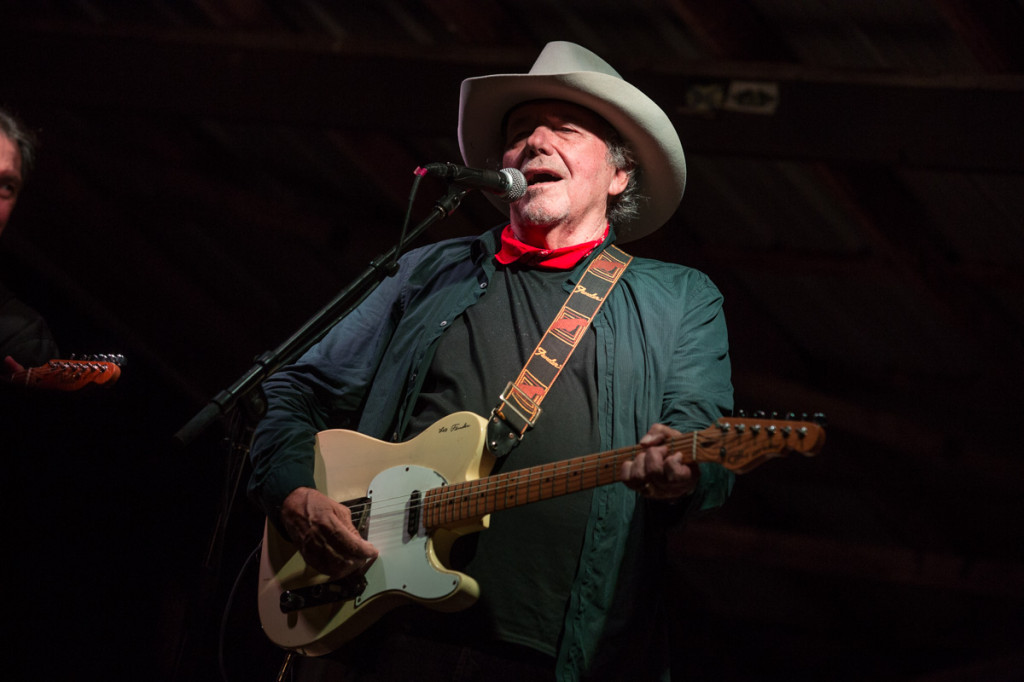 Then we got our fix from Muddy Roots regulars Sean & Zander. For us, it wouldn’t be Muddy Roots without hearing So Slow She Rose, Punk Rock Saved My Life, and Good Pussy’s Like Heroin, You’re Better Off With That Cheap Wine. Joseph Huber delivered the folk country we were hoping for. He and his band sounded fantastic. Then Bobby Bare took the stage and handled the crowd like putty in his hands. He was hilarious, and he and his band sounded perfect. We were lucky enough to find ourselves standing right next to his son, Bobby Bare, Jr., who was singing along to many of the songs, so we took the opportunity during a quiet moment to tell him how much we liked his latest album. 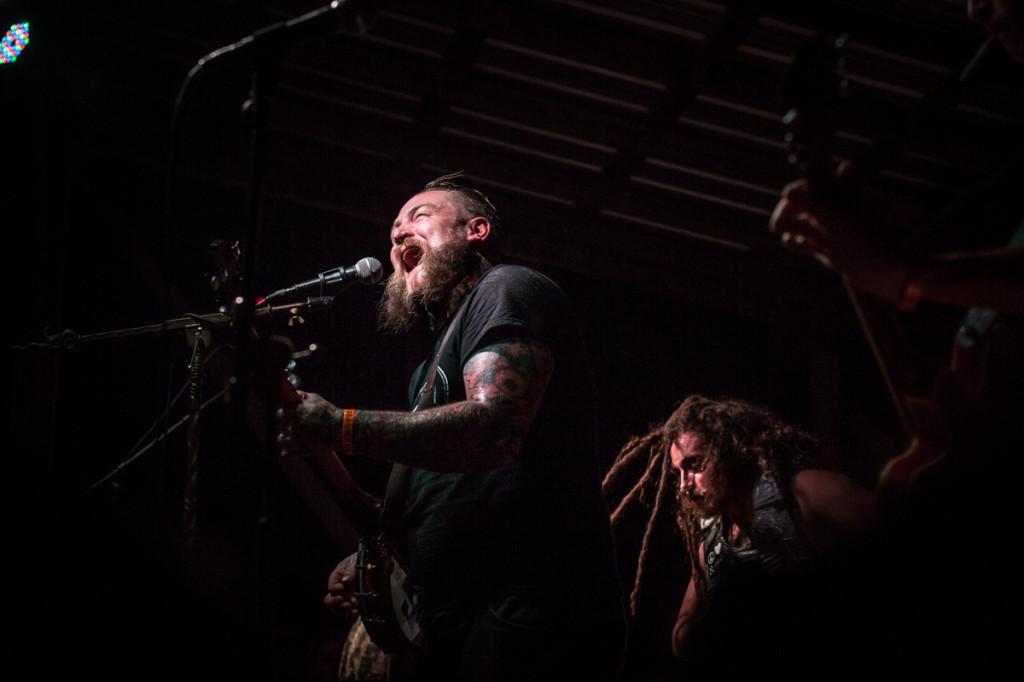 The Goddamn Gallows were the last act we caught at the festival. They sounded great, and were exploding with energy for the entire show. We know it kept us going because right after their set, we dragged ourselves back to the campsite and crashed after a very satisfying Muddy Roots Music Festival.

8. The Tillers. Photo by Sundel Perry.

9. The Sonics. Photo by Sundel Perry.

11. The Monsters. Photo by Sundel Perry.

15. The Blasters. Photo by Sundel Perry.