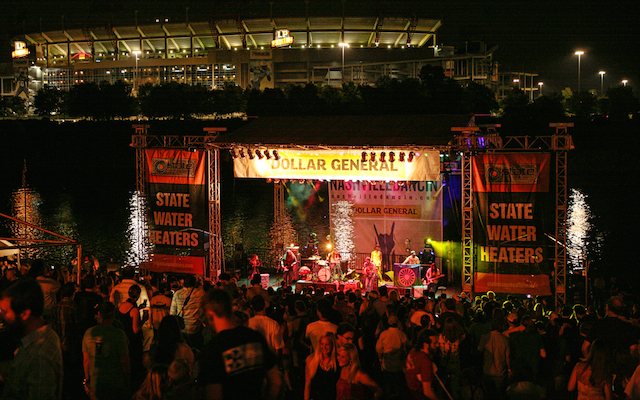 Well, we suppose that all good things must come to an end, and it appears that Nashville Dancin’ is no exception. The free summer concert series spanned eight weeks and came to a conclusion last Thursday with performances by blues supergroup Hard Working Americans, indie rock favorites Turbo Fruits, local three piece MODOC and the classic rock duo The London Souls. In our opinion, this was a fantastic lineup to end the free series on, so we took our photographer Michael Brooks with us to capture the event. It turned to be just as entertaining of a show as we expected; there’s a lot to be said and seen, so go ahead and click through this jump and check out our review of the final installment of Nashville Dancin’.

Despite billing themselves as a duo, the first band of the evening, heavy rockers The London Souls actually play live with a bassist, which should have been the first sign that everything with this band is not what it seems. After all, if appearances were everything, we’d guess this band was your classic indie-rock trio, happy to play that standard, boiler-plate rock we’ve all grown to love and tolerate. Fortunately, appearances can be deceiving, and the group ended up playing a much more high energy and all-together musical set than we originally expected. The group’s musical explorations tend to feature a surprising number of English rock staples for a New York based band, but the group absolutely pulls them off. Furthermore, one can hear the likes of Jack White in the fuzzed out, melodically driven rock songs the group plays. Not that the songs necessarily sound like White, but simply that the style of songwriting and the way the tunes seem to pull listeners along are very similar to the qualities that have made White such an icon. What was most striking to us, however, is the group’s dedication to pure rock and roll. In today’s world of ridiculous stage gimmicks, playing along to tracks, and employing every trick in the book to make an artist look good, seeing a stripped down three piece rock band simply playing their balls off is always a welcome site.

The evening’s next act was local three piece MODOC. Much like the London Souls, these guys seem thrive in distorted, head-banging rock. This didn’t really present much of a problem to us, as we love getting down, a mentality that seemed to permeate throughout the crowd. That being said, MODOC definitely takes a different route with their music than The London Souls, employing more indie rock touches and definitely a less harsh, more poppy vocal tone. Even if we didn’t know already, it would be pretty obvious that these guys are from Nashville, as their melodic structures and general tone are pretty standard across the Nashville house rock scene. Fans of Sol Cat or Fly Golden Eagle will likely find MODOC to their liking. By the way, we don’t mean to imply that MODOC simply copies what’s going on around them; in fact, the reason this sound is pretty standard in Nashville is because acts like MODOC have been so successful in this sound. What distinguishes MODOC from the millions of other garage rock acts around here is the trio’s unique ability to harness energy in their songs. From the start, each song drives quickly and steadily through, never slowing down. Any musician can tell you about the amount of raw power and musical talent needed to play music that energetically over a sustained period of time, and yet MODOC makes it look like it’s nothing.

Speaking of energetic acts, our next band of the evening, Turbo Fruits, definitely fits that bill. The veteran local rockers have been playing house parties since back when most of the current scene was still in high school, and their extensive resume proves that the band is just as popular today as ever before. The group distinguishes itself with their haphazard rock; it’s the kind of music that sounds like it’s barely strung together and constantly careening out of control, which adds an excitement and energy to their sound that’s hard to capture in any other way. Of course, being the experienced rockers they are, the set never falls apart, which proves why the Turbo Fruits are the masters of rock they are. At their Nashville Dancin’ performance, their loose rock sound went over quite nicely with the audience, even prompting a small bit of crowd-surfing, which almost never happens at this event due to the way Riverfront is set up. For that reason alone, the group should be proud of their performance, but don’t forget to take into consideration the strong musical presence the group put together. All in all, it was a great show, so hats off to the Turbo Fruits.

Our headliner for the evening was Hard Working Americans, whom we actually saw the night before at Acme. Because seeing a band two nights in a row makes it rather easy to compare the quality of each performance, let us assure the attendees of Nashville Dancin’ that Hard Working Americans were on top of their game. The six piece blues supergroup brought out famed songstress Elizabeth Cook to play with them; of course, any show with seven musicians as experienced as these will definitely be a great show, but this night the group seemed to play particularly tight. Hard Working Americans really excels in the psychedelic, solo-heavy side of blues rock, which typically makes for a fantastic live show. After all, nothing gets the audiences’ pulse pumping faster than a blazing guitar solo on top of some tight bass and drum grooves. We’re not sure if the group is received this well everywhere, but it was quite evident that Nashville absolutely loved their set. We’d be hard-pressed to think of a better way to end the series, and we can’t wait to see what acts come out for next summer’s rendition of Nashville Dancin’. Until then, remember to keep on keep on dancing!