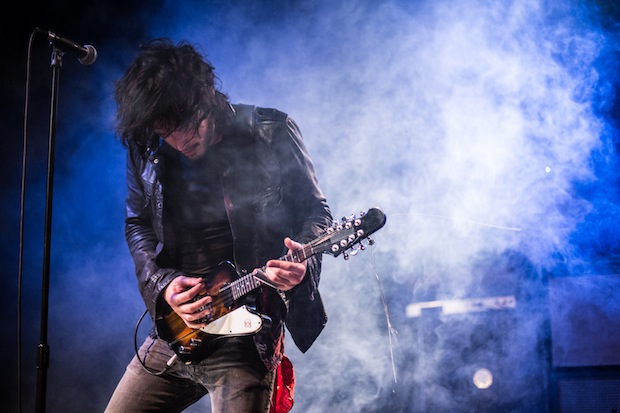 After a little over six months since gracing the stage at Exit/In when he opened for J. Roddy, Reignwolf crashes in again with teeth and sweat. Throwing instruments and wielding his howling guitar like an extension of himself to reach down deep and grab your gut in a full grasp, Jordan “Reignwolf” Cook, tore us apart and left us bruised, battered and awestruck on Monday, May 12th at Exit/In. Opening up the night was none other than the blues/soul indie rock infusion The Black Cadillacs. They drove right to the core of our bones with their swooning melodies and contagious energy fueled by a fanaticism to leave everything they have on that stage. At this, they definitely succeeded.

Check out the full review along with photos by Matt Cairns of The Black Cadillacs stomping and punching their Knoxville roots into our musical tastes, and Reignwolf tearing apart a smoldering stage.

Waiting in line outside Exit/In, we set the mood early, talking about our favorite guitar legends and counting our dollars for whisky. At a little after 9 PM, The Black Cadillacs roll out onto the stage and they don’t hesitate; this group hailing from Knoxville starts out the night with a raw fire that fills your stomach. With each stomp and kick they ground their dirt into that stage and into the little check list of bands inside of my head labeled “unforgettable”. Also, let’s not forget, these guys are talented. We know this should be implied, but their performance was not just flawless; it was inventive. With well-orchestrated explosive and epic shifts, they find a groove. Then, in a fling of sweat, they throw you for a flurry of tambourine and feverish bass that demands you to move. Ending on “Fractures”, you can feel the adrenaline start to pump again as you’re swung back and forth over mountains and valleys of dynamic energy pouring out whatever they have left to make it known that The Black Cadillacs were here.

After a somewhat lengthy intermission of stage techs setting up what looks like large stacks of used amps and cases, the anticipation slowly builds into a vibe that we are about to experience something revolutionary. Then, as the cheers turn to roars and the side curtain opens, Jordan “Reignwolf” Cook rushes out to the stage with band in tow and a grin on his face as if he is thinking, “oh, but just wait”. At once he launches into a night fueled by an electric fever of orchestrated chaos.

Wielding his abused Gibson, Cook cuts like a knife in the bluesy riff that builds into “In The Dark” and with a rasper’s voice sings out, “my love has gone and tore us apart”. You can feel the energy and emotion like a building fire as the stage starts to smolder under the intensity of a man standing on his kick drum driving his boot down and down again over the deep, grungey, blues that echo from those same vintage amps which sat quietly in anticipation just moments before.

Switching instruments from guitar to bass to electric mandolin and back to guitar, Reignwolf masterfully produced an organic and inventive performance that screamed, “what the hell, let’s do this”.  This became truly apparent after dropping down to the audience’s level, and with a breathe like steam, sang into them as the band threw the drums together on the front of the stage and hammered the rust out of our joints. Careening over the people and shouting out “are you satisfied?”, Cook yearns for a response all the while knowing the answer and dives back into a frenzy of fret fueled freedom.

After a few more moments of jaw-grinding swagger, they bring their set abruptly to an end. The crowd cheers and yearns for more. We hear somebody behind us ask, “do you think they will do more…?” Cook is not done. Almost as an answer to this man’s questions and the ceaseless pleading from the crowd, he returns with a worn and tired looking Rickenbacker, displaying it’s guts in a tangled mess. You can tell this instrument has seen some things. Cook wielded the wounded beast with an intensity only reserved for an encore, with a guttural destructive ending of thrown snare drums, cymbal stands and an exasperated Cook, the night ends and the band leaves the stage. As the adrenaline ebbs away, we are left with only one response to Cook’s earlier question, “Yes, I am satisfied”.

Both Reignwolf and The Black Cadillacs are touring heavy this year, so make sure you find a time and place you can witness both of these bands tear apart our traditional ideas of what a live show is, or don’t if you want to miss out on an eye-opening experience.