Bonnaroo Club Stage Band of the Day: The Dunwells 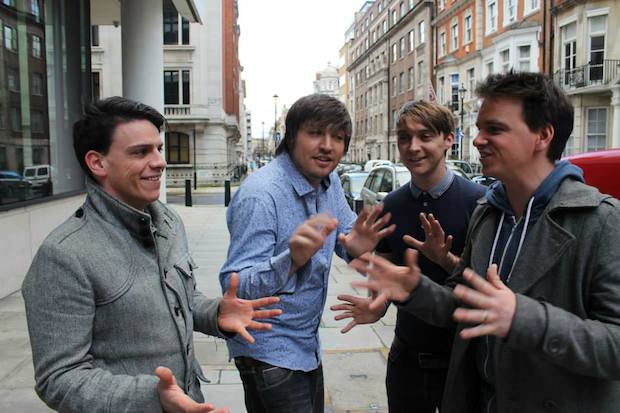 Hailing from Leeds in Yorkshire, England, The Dunwells consist of brothers, Joe and Dave Dunwell, and cousins, Johnny Lamb and Rob Clayton, which effectively makes them the British version of the Kings of Leon. Also like KOL, this family affair got one of it’s first big breaks in Tennessee. At Memphis’ 2011 Folk Alliance Conference, to be exact. Since then, the band have signed with Austin, TX indie label Playing In Traffic, got into a joint venture with Paul McCartney’s label, Concord Music Group, released their critically acclaimed debut album, Blind Sighted Faith (2012), and made an appearance on a Jay Leno-helmed Tonight Show. Not too bad for some up and comers who are about to pop their Roo cherries.

The “Double Ls” as they are called in their native land, have been working hard on their second record, dropping later this year, with some heavy hitting producers like Stephen Harris (Dave Mathews Band, Kaiser Chiefs). They hope to blow up even more this summer, and to introduce more people to their British take on Americana; a little bit like Mumford and Sons or Fleet Foxes with more meat on the bone and a heavy alternative rock tinge. Enjoy the live performance of their debut album’s title track below, and stay tuned for more from yet another Club Stage band all set to explode into the mainstream. You have TWO chances to catch them live at the farm, so make time in your itinerary. You can thank us later.