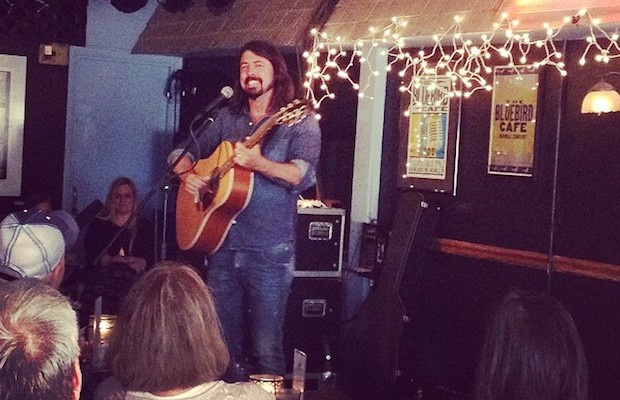 Pulling a move out of the Steven Tyler playbook, Foo Fighters frontman and former Nirvana drummer Dave Grohl played an unannounced show for an unsuspecting crowd of less than 100 people last night at Nashville’s Bluebird Cafe. While no stranger to surprise performances, this one appears to have been Grohl’s most intimate yet, and featured nine acoustic Foo songs played solo (as noted by The Tennessean).

The show was apparently filmed, and, though the singer did not specifically state why, we have a pretty good guess. Our friends at the Nashville Cream revealed that the Foos are working on a new album, recording each song in a different city and filming the whole affair for a documentary (a la Foo Fighters’ Back and Forth and Grohl’s recent Sound City). That, paired with their Zac Brown Band connection, seems like the most plausible explanation, and was even corroborated, to an extent, by Instagram user @grohly_grohlington. Below, we’ve got a video clip and fan photos from last night’s performance. Enjoy (and try not to get too jealous)!