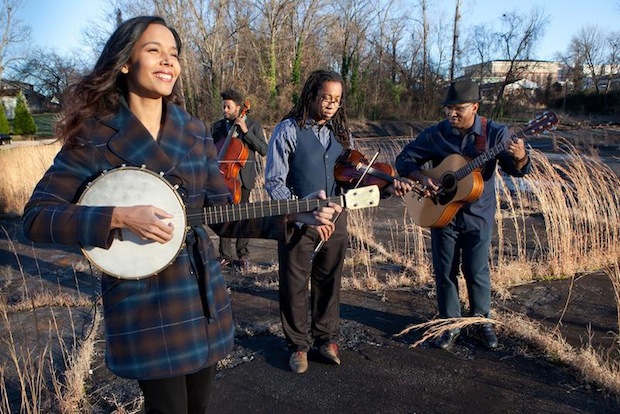 Although the lineup has changed a bit since they won a Grammy in 2010 for Best Traditional Folk Album, the old-time string band Carolina Chocolate Drops‘ playing remains the same in 2014. Emulating the African American dance hall bands of the ’20s and ’30s that birthed all uniquely American music like blues and jazz, they also borrow from the sounds of Bluegrass and jug bands from their native region of North Carolina. The group’s members are all multi-instrumentalists and vocalists, and their sound is heavy on banjo and features some fearsome fiddling and you can expect some authentic “flatfoot” dancing from the era they so proudly represent.

The band got its start in 2005 when the founding members (Rhiannon Giddens, Dom Flemons, Justin Robinson)  got together in Durham with Joe Thompson, who was 80 years old at the time. Thompson is a legend in African American Folk Music, and learned form the genre’s founding fathers. He taught the Chocolate Drop songs, told them stories of how he got his start, and, most importantly, jammed with the trio. At first, playing gigs was just a way for the three to share their love of the traditional Americana music, which most people knew nothing about. When they released Genuine Negro Jig though Nonesuch in 2010, the accolades came rolling in, as did a Grammy, and the group really began to gain traction. Robinson left amicably in 2011, and was replaced by beatboxer Adam Matta and multi-instrumentalist Hubby Jenkins. Their latest release, Leaving Eden (2012), which they recorded in Nashville, proves that there are still songs to be sung and fans to won with their unique playing style. See some living American history for yourself and feel free to dance along!