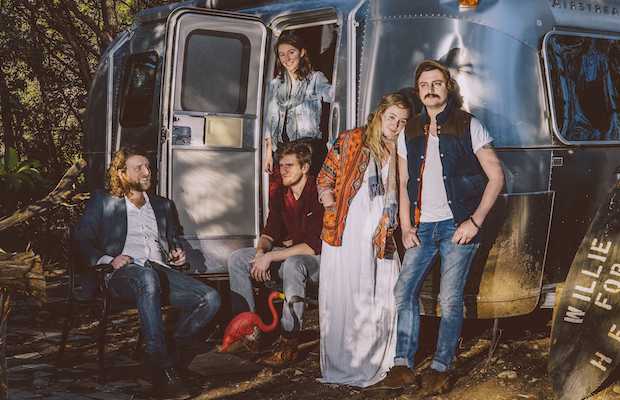 Hovering comfortably between the realms of indie rock and folk music, Texas newcomers Wild Child are quickly gaining a reputation as one of the best and most exciting up and coming acts on this year’s Bonnaroo bill, and certainly a must-see among Club Stage bands. Formed in 2009 by core songwriting duo  Kelsey Wilson and Alexander Beggins, Wild Child released their first album, Pillow Talk, in 2010, to immediate acclaim. The pair met by chance on a road trip, and, upon discovering their immediate musical chemistry, enlisted the other four members who now make up Wild Child. Though their early music leaned acoustic, a combination of touring and the production guidance of Ben Kweller on their latest release, The Runaround, has unleashed more of an electric embrace, and a more fully-formed penchant for dense, catchy orchestration.

Already darlings of the indie folk scene, Wild Child’s whimsical, energetic, and upbeat aesthetics, paired with heartfelt lyricism and an unbeatably fun live show, has earned them endless media praise, tons of SXSW hype, and even two Austin Music Awards. We’ll be the first to admit that the folk fad is getting a little stale, as is the arbitrary use of unorthodox instrumentation, but there’s nothing arbitrary or insincere about anything that Wild Child does; they’re an organic, heartfelt extension of an incredibly gifted pair of songwriters, and we can’t imagine them sounding any other way. Give their music a spin below. Then repeat. Then add them to your ‘Roo list.