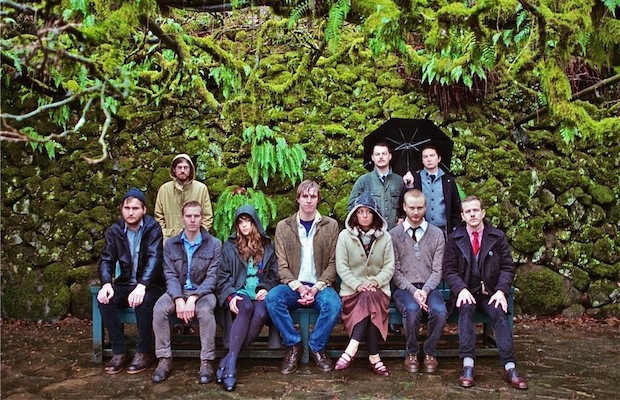 Originating from Portland Oregon, this eleven member tour de force is not your everyday indie rock band. Known for their complicated arrangements, diverse instrumentation, and painstaking approach to orchestration, Typhoon incorporate a brass section (trumpet, horns), a string section (violin, cello), and sometimes even a ukulele, in addition to traditional rock instruments. At any given time, all eleven members will be playing, vocalizing, or clapping along during songs at live shows. They are very high-energy and engaging, and most band members even play multiple instruments, a testament to their immense technical skill. They’ve earned their live cred too, touring relentlessly for years, and sharing the stage with acts like The Shins, The Decemberists, and Explosions in the Sky.

The group have a little bit of an Arcade Fire feel, especially during live performances, since they bounce around during/in-between songs and swap instruments often. If you’ve never seen them live, it really is amazing, though we do feel bad for their sound guy and roadies, who have to set-up and coordinate the  plethora of sounds. Even still, they are a must-see for any fan of eclectic, layered and complex indie sounds. Typhoon have played Nashville before, and you’ve probably heard their songs on Lighting 100, but have another listen or two below, and add them to your ‘must see’ list for ‘Roo. For further exploration, revisit any of the group’s four fantastic full-lengths or two EPs produced over the last decade.