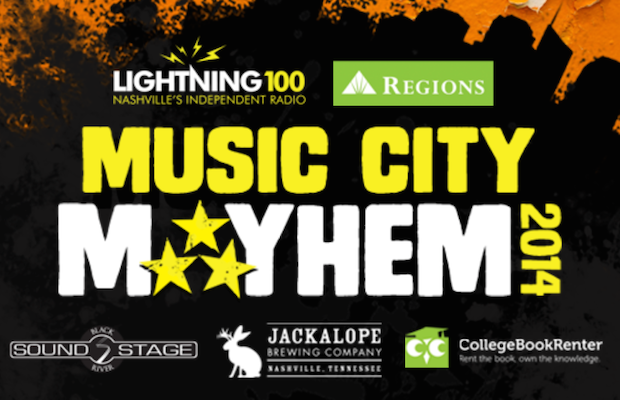 Lightning 100’s 2014 Music City Mayhem competition has begun! After receiving over 340 submissions, our favorite independent local station has narrowed them down to the top 32, who will participate in a fan-voted bracket style competition to join the ranks of past winners Lulu Mae, Roots of a Rebellion, Eastern Block, Hightide Blues, and Moon Taxi, with supporting slot at this summer’s Live on the Green and more!

Check out a preliminary round schedule below, keep reading for a playlist of every competing artist, and keep an eye on the Music City Mayhem site for the latest updates. Once the final four artists have been determined, they will compete live in a battle of the bands April 19 at Pavilion East. Don’t forget to vote!

March 17
Round 1: Black Sea Royalty vs. Cooper and the Jam
Round 2: Dynamo vs. ELEL

March 18
Round 3: The Gills vs. Kiernan McMullan
Round 4: Jonny P vs. Zeke Duhon

March 19
Round 5: Bearheart vs. Farewell Flight
Round 6: Coat Tales vs. Frances and the Foundation

March 20
Round 7: Them Vibes vs. Heavy Sole
Round 8: Black Foot vs. Liza Anne

March 25
Round 13: Golden Youth vs. Oliver and the Spectacles
Round 14: Phin vs. Red Wine Hangover

March 26
Round 15: Safe in Blue vs. Guthrie Brown
Round 16: The Heavy Heavy Hearts vs. The Future

As you can see, this is an insanely talented bunch, and just about every artist in the running has been featured on this site at one point or another. We wish everyone the best of luck, and can’t wait for another exciting year of competition!