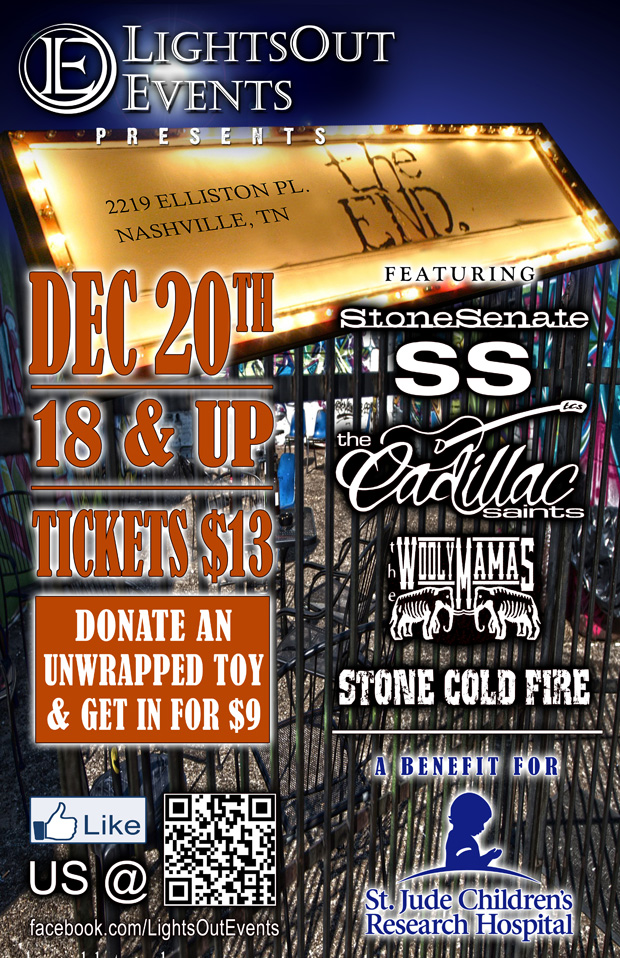 You can get discounted tickets by bringing unwrapped (NEW) toy donations which will go to St. Jude Children’s Hospital in Memphis, along with 100% of the proceeds from the event. To learn more about the line-up, read on.

Southern rockers Stone Senate (formerly known as The Shakes) just released their EP, “Hard to Stay Warm,” after spending most of the year touring across the US. And, as if that wasn’t good enough, the band is actually taking a break from their national tour with the world-famous group, Tantric, (once known as Days of The New,) to headline this year’s show. If that’s not dedication to their home state and the children of St. Jude Hospital, then nothing is!

The Cadillac Saints are a five-piece southern rock/blues band based in Chattanooga. The band began with the brothers, Matthew and Jeremy, growing up playing guitar and writing music together.

The addition of bassist and vocalist, Jeff Copeland, came in the summer of 2009. Shortly before fall of that year, the addition of drummer Jeremy Muse came about. After getting together in Matthew’s garage, the four realized that there was something special about the journey they were embarking on together. In the short time The Cadillac Saints have been together, they have garnered the attention of fans, promoters, and other musicians across the region.

The winter of 2010 brought on many new songs and a new addition to the lineup. Brett Nolan, a long-time Chattanooga musician, joined the band on keys for a few February dates. The final layer the band was looking for was there when he officially joined The Cadillac Saints in March of 2010. The band continues to forge ahead as more and more people come to know…The Cadillac Saints.

The Wooly Mamas are a Nashville, TN based trio that plays original music with an eclectic mix of genres including roots rock, alt country, grunge and blues. They hail from the suburbs of Washington, DC, where they began playing music together in 2002. The trio was originally formed as a cover band one night at local bar in Manassas, VA. Although their first gig together was meant to be nothing more than a friendly jam session, they soon realized that the chemistry between them was undeniable. Over the next many years the group played numerous bars and clubs around the east coast, honing their craft with an eventual repertoire of over a thousand cover songs in a wide variety of musical styles. From Hank Williams to Nirvana, Wilco, Tom Waits, from The Stray Cats to The Beatles, the band drew influence from all of their favorite music and soon-after started to flesh out a catalog of their own original songs. After 6 years as a constantly gigging cover band, the trio took their new library of all original material and moved to Nashville, TN where they formed The Wooly Mamas.

In 2013 the band released their debut EP, “Parlor Deluxe” which can be physically purchased, downloaded, or streamed for free online. In December 2013 they digitally released two brand new tracks, Breakfast and Make Sure that were recorded at Talk Box Rodeo Studio in Nashville. The Wooly Mamas’ music can regularly be heard on local Nashville radio. The band can currently be seen playing live in Nashville and surrounding areas.

Stone Cold Fire is a fairly young Blues / Rock group fresh out of Joelton, TN. Their sound is strikingly similar to the legendary band, The Doors. The band was formed in April 2011 by Ben Cooper (Guitar), David Tabb (Bass), Thomas Eakes (Drums) and Chase York (Vocals). They played their first show the night they graduated from Sycamore High School and have been consistently impressing and gaining new fans in the Nashville area ever since. They played at the very first St. Jude Benefit show that LightsOut Events produced at a long lost, unique venue in Nashville, The MUSE, and they have been on the bill for the St. Jude show every year since.

Stone Senate, The Cadillac Saints, The Wooly Mamas, and Stone Cold Fire will perform December 2o, 2013 at The End. The show is 18 & up, begins at 9pm (doors at 8pm), and tickets are available at LightsOutEvents.com for [$13 or $9 with an unwrapped toy]. All proceeds go to St. Jude Children’s Research Hospital in Memphis, TN.