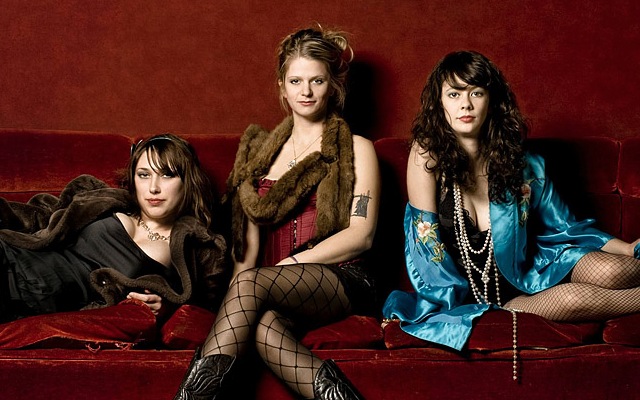 This holiday season, maybe you’re feeling a bit burnt out on the music scene here in Nashville. You’ve gone to the shows, attended the house parties, and maybe even bought a piece of merch or two. Suffice it to say, you’ve done to whole “show” thing. But have you ever attended the taping of a live performance? If not, then you’re in luck, as not only will Nashville locals Those Darlins be putting on a killer show tonight at The Stone Fox, but they will also be recording this show as a candidate for an upcoming live album. The evening will be structured much like a traditional show, in that there will be two openers (D. Watusi and Churchyard), but will feature a few twists from your run-of-the-mill performance. This includes both the actual recording and the local Nashville surprise artists who will be performing with Those Darlins. The group will also be performing a variety of new songs most fans haven’t been exposed to yet. Other details you might want to keep in mind about the event tonight is that it is in fact 18+, will cost you $10, and begins at 9 pm.

Take a dash of surf rock and a pinch of indie vibes, infuse a healthy dose of punk rock attitude, and boil in the waters of pristine female vocals for 25 minutes. Then, add the seasoning of…well…this metaphor got away from me a bit, but it still highlights what’s most important about local rockers Those Darlins: bite and attitude. Listen to the song below to get a taste of the first of these attributes; it’s quite obvious this three piece knows how to throw down when necessary. However, also pay attention to the actual aesthetics of the video. The band has an undeniable sleekness to them; they’re rough, but in quite an alluring way. To best understand the nuances of these expert players, be sure to see them live tonight.

On first listen, D. Watusi seems like an act straight out of the 90’s. Between the wailing vocals, crunched guitars, and hypnotic songwriting, this wouldn’t be a bad guess, but the truth is D. Watusi is a modern act from Nashville that happens to absolutely nail that 90’s grungey, post-punk sound. Here’s the thing though: it doesn’t sound dated. Not in the least bit. There’s no telling how D. Watusi manages to pull that off, but it probably has something to do with the hints of modern indie rock present in their tunes. Either way, it’s quite impressive and certainly worth a listen tonight at the Stone Fox.

Based out of East Nashville, the all girl four piece Churchyard is still a fledging act but has already begun making a name for themselves both here in Music City and abroad. The group rightfully claims to encompass the sounds of “mystic excursions and bayou blues”, and one really would be hard pressed to find a better description than that. You know want to check out a group that causes mystic excursions to occur. Be sure and get there early enough to see this great new act live and in person.