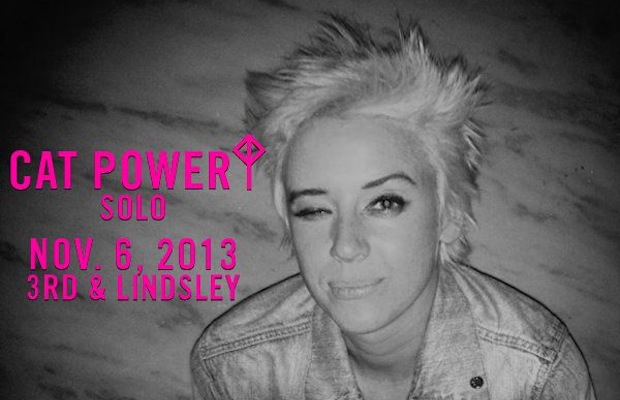 Speaking of Women Who Rock, we’re pretty excited to be doing a ticket giveaway for another of our most anticipated shows of the fall.  We told you about the Cat Power show when it announced a couple of weeks ago, and we’ve been clamoring over who gets to cover it on our end.  But, now, we are excited to announce that a couple of lucky winners are going to get to join us to check out the show as our guests.

We’ve got a few more embeds and the announcement of supporting act, Nico Turner, to the bill.  Check those out below, and scroll to the bottom for details on how to win tickets.  Of course, you could just go ahead and buy one right here, if you aren’t feeling lucky.

As we told you at the end of last year, the new Cat Power album, Sun, is incredible.  It made our top ten list of national artist releases of 2012.  We’ve been waiting for an announcement of a Nashville date for Chan Marshall (that’s Cat Powers’ given name) since that record released, so we were definitely stoked to hear when it was announced.  Having the show in the intimate confines of 3rd & Lindsley was just icing on the cake, because this solo set of all your Cat Power faves is going to be a real treat in that venue.  Check out Cat Power slaying some zombies in her video for “Cherokee” from her most recent release.

Drummer extrodinaire Nico Turner first became acquainted with Cat Power by working with Chan on tour last year, and I guess she will fill in as supporting opener on this tour.  We’re not sure what Nico will bring to the table, but, when Colm Ó Cíosóig of My Bloody Valentine says he “had to rethink his drumming style after seeing [her] play”, that makes us think that we are definitely going to be in for a treat.  This will also be a special treat for all of us that are fans of RRIICCEE, DREAMtapes, VOICEsVOICEs, Brightblack Morning Light, Her Friday Girl, & boy/girl.  We don’t really know much about her solo project, but you can check out her cover of Nirvana’s “Something In The Way” below.  If it has half the creepy, surreal effect on Trent Reznor that it had on us, I’d say he’ll be singing her praises just like MBV did.

Must be 18+ to enter, per the show’s age requirements. Winners will be announced Tuesday, November 5th, at noon, and will each receive a pair of tickets. For a bonus chance to win, RSVP to the event here, and share it on your Facebook wall. Enter below (you will be redirected to your e-mail, where you will need to hit send):

If you’re having issues with the above form, you can alternately send your full name in an e-mail to [email protected] with “Cat Power Giveaway” in the subject line, and please let us know if you shared on Facebook.