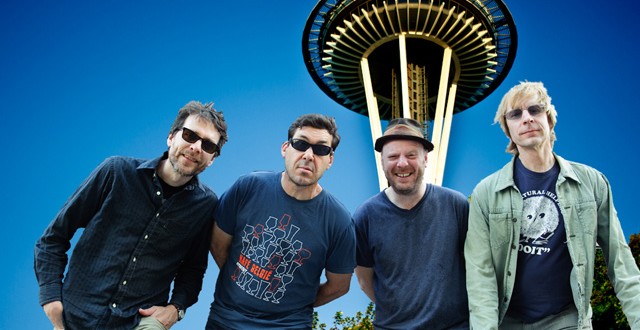 Godfathers of grunge Mudhoney are slated to appear with Nashville-based rockers Cheap Time tonight at a sold out show at Third Man Records. The fellas of Mudhoney have been feeding us dirty fuzzy rock for the past 25 years and show no signs of slowing down, with an extensive tour supporting their 9th studio release, Vanishing Point.  Keep reading to find out more about tonight’s lineup, and to find out how you can still catch the grunge greats even if you didn’t snag a ticket to the show. Also, keep an eye out for our post-show coverage.

It doesn’t get more quintessential Seattle punk rock than performing on top of the Space Needle, and Mudhoney did just that back in July to celebrate the 25th anniversary of their label Sub Pop. Below, check out a track from their performance on the Space Needle, as well as their awesomely disturbing new video for “The Only Son of the Widow From Nain,” from their latest release, Vanishing Point. Like other performances at Third Man Records’ Blue Room, this show will be pressed direct-to-acetate.

Rock trio Cheap Time have got it going on. The Nashville-based band has toured with Jay Reatard, Yo La Tengo, & Guitar Wolf (to name a few), and we can’t think of a better group to fill out tonight’s bill. They’ve gone through a few lineup changes themselves, but are still making killer music. If you didn’t grab a ticket to the show tonight in Nashville, consider a weekend trip to Memphis tomorrow night (9/27) to catch both Cheap Time and Mudhoney at the Hi Tone as a part of Goner Fest.

Mudhoney and Cheap Time will perform September 26 at Third Man Records. The show is 18+, begins at at 8pm (doors at 7pm), and tickets are SOLD OUT online.