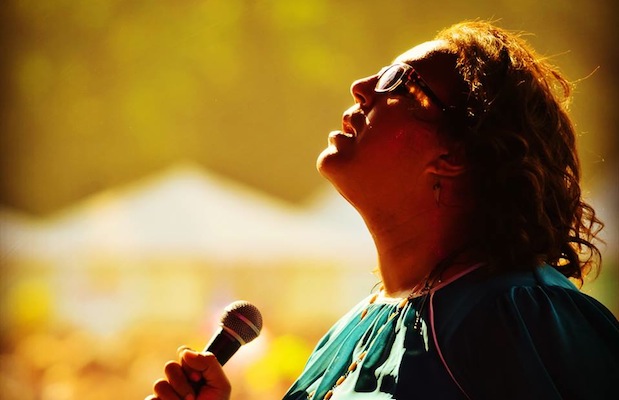 Click through for previews of the bands, some media to check out, and details on how to enter the contest.

It has been a wild few years for Alabama Shakes and frontwoman Brittany Howard.  Bursting from obscurity into such an amazing star, all from the back yard over at The Groove one fateful afternoon, it has to still feel like a dream to her.  We’ve seen this woman many times since the Shakes first garnered national attention.  We’ve seen the trumpet-piped frontwoman in some of her non-Shakian awesomeness (Thunderbitch, that Superjam, doing Zepplin Jams, and even slinging drinks at this year’s Forecastle Festival), and have been amazed at her sincerity in each event, even after appearing in a star studded tribute at the Grammys this year.  So, this night will almost be like a homecoming.  The fall weather is upon us, and we should all head to see Brittany and Co at one of the best outdoor venues in all of Nashville.  It’ll be like going to church… only better.

Fellow Alabamans The Dexateens haven’t really been in the spotlight for a few years, but they sure did bring some powerful Lucero-esque punk-n-roll back in the mid to lates of the past decade.  It’s been quite awhile since we’ve seen these guys out and about on a Music City stage, so this should be a pretty highly entertaining middle of the bill that will make it worth your while to make your way there early (or, at least stop drinking in the parking field).  If you are too young or senile to remember, here is a clip of their Music City Roots set from the summer of 2010.

Local rockers, Majestico, get things started, and should bring the passion to those in attendance at that early hour. Or, they can at least build some new some fans, since most of Majestico audience are used to seeing them in the wee hours of Nashville’s haunts. We’re fans of Majestico over here though, so we’ll try to get out there in time to report about their performance for ya. You can check out their track “Love Is God” in the Jeffrey Drag Summer Sampler. It’ll be some good solid rock n’ roll to listen to while you are entering to win tickets.

This one is a bit more elaborate than most of our giveaways, but you guys are smart enough to figure it out.  The winner will be announced on  Wednesday (9/18) at noon [sorry about that, production says they need names earlier], and will receive a pair of tickets:

Second: Share the concert poster on your Facebook wall. You’ll find it pinned to the top of our Facebook page. (Sorry non-Facebook users, we’ll run more e-mail giveaways in the future. Better bug your FB-using friends to enter for you!)

Third: Be sure to also tag No Country for New Nashville in your caption so that we know you’ve entered!

Alabama Shakes, The Dexateens, and Majestico perform on Saturday 9/21 at The Woods at Fontanel. The show is all ages, begins at 7pm, and tickets are available to purchase for $48.