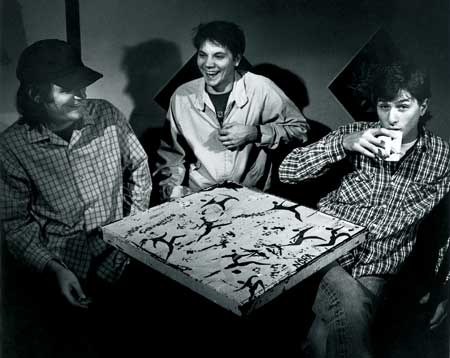 How many people can tell me that Son Volt is better than Wilco? The answer to that question is lots and lots. While I’m a fan of both, I love to engage in the conversation of who did it better after the demise of Uncle Tupelo. For those of you not in the know, Jay Farrar and Jeff Tweedy used to be in a pretty kick ass band called Uncle Tupelo. For those of you that are in the know (and there are a lot of you), the battle rages on in who has the upper hand in post Uncle T success.

We’ll continue this conversation after the jump, and we’ll also tell you about all about what Farrar’s Son Volt, who just conveniently happens to be playing at Mercy Lounge tonight, has been up to recently.

So, why does this Son Volt / Wilco rivalry thrive? Is it that the alt-country purists love Uncle Tupelo too much to to let the founding fathers thrive individually? Were you a fan of that practically Nashville sound you heard in the Farrar influenced Uncle Tupelo songs? Do you despise Tweedy for improving as a musician, and ultimately taking more of a leading role? According to a 2005 Pitchfork article (wow, thanks way back machine) from Farrar, after being called a “pussy” by Tweedy, “there were steps we could have taken to have a better relationship and a better understanding. It could have happened. But it didn’t.”

Is there still some angst that Tweedy’s Wilco has most definitely had quite a bit more popular success? It’s hard to argue that metric after Wilco sold out two nights at The Ryman, and you can still grab tickets for Son Volt here.

I feel like it is the Uncle Tupelo fan versus those that found love for Wilco or Son Volt after the fact. If you became a fan of Wilco before Uncle Tupelo, it might be hard to imagine turning back to those simpler times, or maybe you are one of those people who knows everything there is to know about music because you have been a fan of Wilco since Being There. Yeah, you know who you are. For those that knew Uncle T first, it might just feel like too much of a divergence to expand into something like the “Art Of Almost“. At least all of you purists won’t have to stand in line for hours tonight to see the closest thing that remains of Uncle Tupelo.

It’s still fun to fan the flames on this one, and I do sincerely respect both of the spawns of Uncle Tupelo. So, if you want to continue this argument, we can take it outside to the deck at Mercy Lounge tonight. Or we could just be glass half full drunks, and discuss Prefix magazine’s “10 Best Albums Resulting From Uncle Tupelo’s Breakup.”

In the meantime, get in the mood for the show by checking out the newest Son Volt record Honky Tonk, which released on March 5th on Rounder Records below. Things get started with Colonel Ford around 9pm, and you can snag your $20 tickets right here.