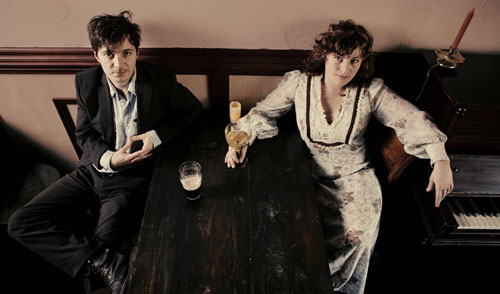 I admit, I’m a bit of a Shovels & Rope newcomer. I’ve only listened to their amazing debut, O’ Be Joyful, a handful of times, and last Thursday at Mercy Lounge was my first time seeing the duo live. Having only watched a couple of live performance videos, along with their recent television debut on Letterman, I arrived with little preconceived notion of what their live show would be like, much less what the group would perform. As it turns out, their repertoire spans much, much deeper than O’ Be Joyful, and Shovels & Rope performed a solid and enthralling 90-minute set to a completely packed room, only pausing for the occasional moment of banter or to trade instruments.

Nashville singer Andrew Combs kicked off the night. Admittedly, I arrived in time to only catch about half of his set, so I won’t speak about it at length other than to say Combs is as excellent performer as he is a songwriter, and if you’re not familiar with his music, you should correct that immediately. He’s got that old soul country twang that’s so spot-on, you’d swear he just got teleported here from 1971. I also can’t think of a stronger pairing for Shovels & Rope. Combs was a treat to watch, and definitely an artist I expect to revisit the next time he performs in town (which, apparently, is March 9 at Mercy Lounge with Caitlin Rose).

Shovels & Rope were the real reason I made the trek to the lounge, though, and they certainly did not disappoint. A lot of writers (myself included) have made the easy and obvious comparison to The Civil Wars. Sure, there’s the guy/girl duo, the folky alt-country and Americana sensibilities, the waxing nostalgia for old Nashville, and the straightforward and powerful songwriting chops. There’s even the sudden, seemingly overnight surge of popularity (though, so far it’s been to a slightly lesser degree for Shovels & Rope than The Civil Wars). The similarities end at the surface, however, and comparing Shovels & Rope to The Civil Wars starts to feel a bit lazy as you further familiarize yourself with the band. A more accurate description would be Johnny & June meets Jack & Meg.

When Shovels & Rope choose to lean country, they’re as authentically country as you can get. Singer/guitarist/percussionist Cary Ann Hearst hails from Nashville, but everything down to her demeanor, manner of speaking, and even her clothes and hair hark back to a period of Nashville that ended its golden era before she was even born. That’s not to say she’s inauthentic; in fact, quite the opposite. Hearst clearly has a deep-rooted love and understanding for old country that she’s managed to successfully and wholly co-opt and infuse into a contemporary package, perfectly counterbalanced by bandmate (and fellow singer and multi-instrumentalist) Michael Trent. If Trent’s musical delivery is any indication, he clearly hails from the same authentic country upbringing as Hearst (he’s from South Carolina), although it’s not as directly reflected in his look or demeanor.

The real surprise, at least for me coming in with no real preconceived notions for what to expect, was just how legitimately rock and roll Shovels & Rope have a propensity to be at times. They can punch you in the heart with a twangy, truly country song about love or loss or drinking, then, just as easily, flip the switch and rattle your core with a straightforward, no-BS rock (er, some might argue country rock) tune. Those tendencies are obviously prevalent on O’ Be Joyful; even the record’s title track has a sludgy, distorted, Jack White-esque guitar lick throughout. The fact that the duo not only recreated, but embellished these tendencies live (and on acoustic instruments no less) was a pleasant and enriching boost to what already would have been a high-energy and engaging set. They definitely bear a bit of a White Stripes vibe- if only because their edgier songs consist of bluesy distorted riffs over fairly minimalist percussion. The thickness of their guitar tone and hypnotic rhythms conjured some early Strokes for me as well. Shovels & Rope’s ability to layer songs with only two members is almost unreal. A lot of this spans from their never-faltering knack for interesting and constant harmonies, along with tasteful and nuanced instrumentation (and a full and well-chosen palette of guitar tones).

It’s rare that I can completely enjoy myself throughout an hour and a half set, where the bulk of the material performed is unfamiliar to me. This certainly was not the case for Shovels & Rope; I could watch them perform anything for hours and hours. Not only did they keep the set interesting, peppering in their popular tunes with some deeper cuts and switching lead vocal and instrument duties, but they came off and sincerely charming and charismatic to watch. On top of that, they were simply damn good performers, clearly shaped by years of performing solo and in various other projects, followed by countless early Shovels & Rope bar shows. Their newfound fame (nearly all of their recent tour dates have sold out) might come as a bit of a surprise to the group, but it’s so wholeheartedly deserved. In a day and age when “folk” is being tossed around as trendy way to shoehorn some banjos into a radio rock record to boost its credibility and “country” is a word mostly relegated to describe twangy, overproduced and uninspired top 40 crap, bands like Shovels & Rope are a true breath of fresh air and a testament to the fact that if you make good, heartfelt music, you’ll always have an audience.