Ben Rector Coming to The Cannery | We’re Giving Away a Pair of Tickets!

Hey Ben Rector fans, we’ve got some great news! Not only is the singer-songwriter coming to The Cannery Ballroom this spring, but we’ve got a pair of tickets to give away (info at the bottom)! 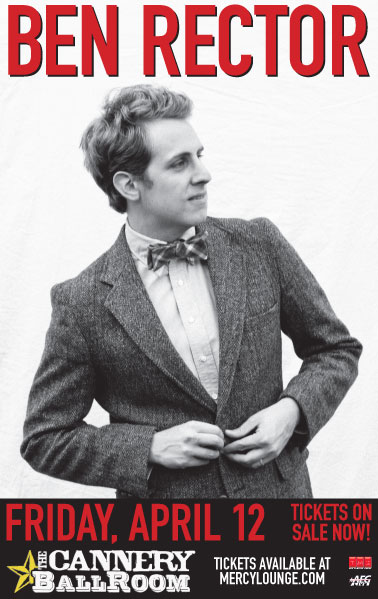 You might recognize Oklahoma native-turned Nashville resident Ben Rector’s music from one of his many, many network television placements. Or, you might know him as the guy who knocked Lil’ Wayne down a peg on the charts with the release of his last album, Something Like This. The prolific singer-songwriter has spent the better part of the last seven years wining over his legions of fans one heartfelt release at a time. He’s toured with such artists as NEEDTOBREATHE and has managed to sell out most dates on his previous few headlining tours- not an easy task for any artist these days. You can check out “Let the Good Time Roll” from Something Like This below:

Presented by AEG Live / The Messina Group, Ben Rector will be performing at The Cannery Ballroom in Nashville on Friday, April 12. The show is 18+, $18, and you can find tickets and more information here. Tickets can also be purchased at Grimey’s, The Groove, and Parlour & Juke.

We’re also pleased to announced that we’re giving away a pair of tickets to one lucky fan! Here’s all you have to do to win: