UPDATE: A previous version of this story was entitled “Band Assaulted at Rocketown for Dedicating a Song to a Gay Friend.” We’ve changed the title to better reflect the situation as we’ve gathered new information. The original title and article are still representative of the events that transpired, as best we understood them when we received reports Saturday night, but new information would suggest that the musician involved was not so clearly victimized in this situation and did, indeed, knowingly provoke conflict. The fact still stands that a musician did enter into an altercation after earlier dedicating a song to a gay friend, but it’s beginning to sound like he had preyed on Rocketown’s prior controversy to fuel an unrelated conflict. As we’ve said in previous articles this week involving Rocketown, there are many things about the venue we still enjoy and respect. Even if we take issue with their handling of Wes Breedwell, it’s still important to keep in mind that Rocketown is a youth-oriented long-running venue, and one that would never intentionally promote or facilitate physical conflict. Further changes and updates to this story are in red. We apologize for any misinformation previously presented in this story. We gathered as many firsthand accounts of the event as we could, but have been presented with a fuller, clearer picture after the fact.

Michael Barr, vocalist for hardcore band Volumes, was allegedly assaulted earlier this evening ( – We know that the staff was involved in Barr’s removal from the venue, but we no longer believe that we have any credible evidence to suggest their actions were uncalled for and, in fact, were necessary in protecting the well being of concert attendees) after being banned from Rocketown for remarks he made on stage. (UPDATE: Based on new information that we’ve gathered, it sounds like Mr. Barr was the primary provocateur of the incident, but but it was grossly escalated by concert attendees). We’re trying to confirm details here as they come in, but here’s what we know:

Volumes are part of a five-band package tour in support of headliners Of Mice and Men. During the band’s performance around 8PM tonight, singer Michael Barr apparently openly dedicated a song to a gay friend (though we have no reason to question Barr’s sincerity of the issue, it sounds like he knowingly used this topic, which is a hot-button issue at Rocketown right now, to stir up conflict). Later in the evening, Barr was banned from the venue and engaged in arguments with concert attendees via Twitter. We’re hearing that sometime around 11PM, during Of Mice and Men’s set, Barr was (The claims of being jumped came from members of the band, then were again recounted by audience members. We now believe the audience members were basing many claims from the band’s recounting of the event.) Our new understanding is that Michael Barr first engaged in an altercation with concert attendees. It’s unclear which party initially started this altercation. Barr was them physically removed from the venue by security, at which point he became enraged when denied reentry. The physical altercation altercation would have presumably taken place at this point. Both Barr and several attendees of the show claimed to have been involved in a physical conflict, but there is no hard evidence to substantiate this. 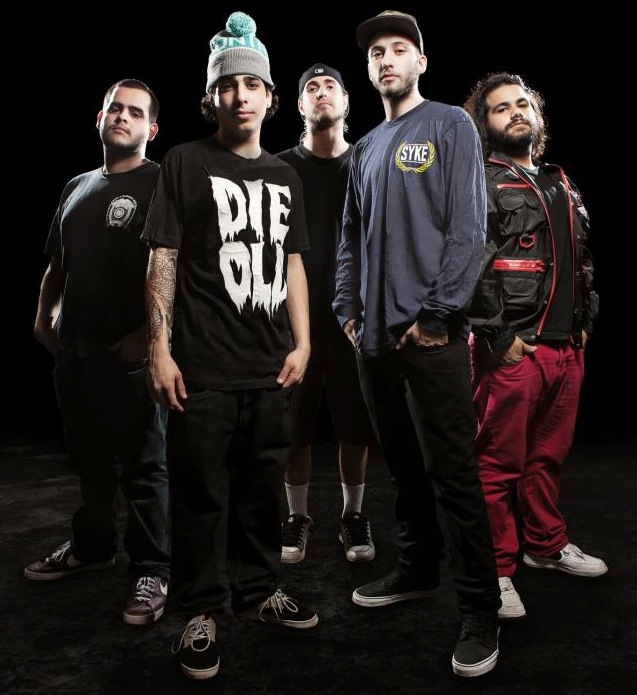 After the altercation, Barr and his bandmates proceeded to post profanity-laden messages on social media, responding to the venue and lashing out against the negative remarks from some crowd members. Barr also singled out and attempted to challenge and provoke audience members and staff, escalating to the point of death threats from members of both sides of the altercation. Volumes have apparently now left the venue.

Here’s a tweet from the guitarist of Volumes giving the most concise (and least profane) firsthand account of the situation:

Mark Mosley, the show’s promoter, made an official statement (retrieved from PropertyOfZack), which sheds a better light on the incident. You can read it below:

Tonight, for the first time in my career I experienced, well, I don’t even know how to describe it. I was the promoter for the Volumes/Of Mice and Men show tonight and got to experience the “incident” with Mr. Barr first hand.  As Mr. Barr was being removed from the venue I was standing next to the exit having a conversation with a friend. As an extremely agitated Mr. Barr tried to re-enter the venue, I calmly stepped in front of him and as calm as could be (people get excited at shows often)  to please stay outside and cool off for a minute. Mr. Barr then proceeded to verbally attack me calling me “faggot” repeatedly as well as accusing me of being a Christian (I am neither gay nor a Christian). He then proceeded to spit on me 2x before being escorted away by security. All the while still calling me a “faggot”, “Christian faggot”, and so on.

I think it’s important that you know more of the story seeing as how its being presented that he was the victim. I do not believe for one second that he was attacked or removed for any reason relating to gay rights.

For me personally, I take gay rights very seriously and fully support equality for all. Anyone who knows me or has worked with me over the years will vouch for my professionalism.

As for the rest of the members of Volumes, they were very courteous and professional and I look forward to working with them in the future.

Our information is mostly coming from the accounts of concert attendees and parties involved. It’s unclear if police were called to the scene (we now believe it did not escalate to the point where they would have been necessary). Rocketown has not commented on the incident and Volumes have made no formal statement outside of social media posts from band members. Though several sources have pointed to Rocketown staff being involved in the assault, we’re waiting for more concrete information before we can fully confirm this fact (UPDATE: the staff’s involvement seems to have been purely for Barr’s removal, which provoked him to lash out against them).

From what we do know about this situation, however, the blame cannot be wholly placed on the venue. In fact, our understanding is that Rocketown handled this situation as best they could. The members of Volumes, though for a well-intentioned cause (if not one they used as a guise to start conflict- since the same singer championing gay rights allegedly spewed homosexual slurs at the show’s promoter), knowingly provoked the Rocketown staff and, while doing so, also provoked the crowd. It’s a shame that members of a concert crowd would react negatively to promoting equality (which should, inherently, not be used a tool to trigger conflict), but the band responding to audience threats by challenging them to violence certainly added fuel to the fire, and was incredibly irresponsible on their part. It sounds like this situation  got much too out of hand in the wake of more legitimate issues, and it’s a shame that Nashville’s otherwise vibrant and positive music scene will have its reputation further tarnished by what transpired this evening. Finally, no matter what your religious, musical, or social views- escalating dissension into violence is never the best answer.

We previously reported on the story of Wes Breedwell, the employee fired by Rocketown on Monday for expressing his views on equality via social media and sporting a shirt from the band Hostage Calm with the message “I Support Same-Sex Marriage.” As a result of Breedwell’s firing, several bands dropped their upcoming shows from Rocktown. Breedwell later issued a single, formal statement on the event.