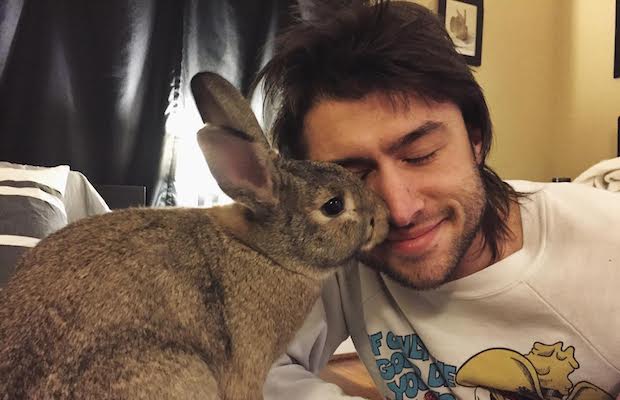 In addition to fronting eponymous thinking man’s punk project Pujol, prolific local artist Daniel Lucca Pujol is an accomplished poet and author. His band’s 2015 EP Kisses built upon his musical background while incorporating elements of spoken word poetry, and last fall’s Mighty Stranger chapbook, which featured a collection of poems and musings, provided him a base of new material to perform live in a spoken word format.

Daniel’s latest release further experiments in spoken word, and is a 12″ LP single called “Political Errors @TheEndOfThe20thCentury,” a left of center and resonant political opus, which “tells a short story — using familiar characters — to make a simple statement: We’re living through the end of the 20th century, and we’re bedside watching its death throes.”

Side A of the ambitious work premiered back in the spring, and we’re thrilled to bring you the complete picture with our premiere of Side B, ahead of a vinyl release later this month on Cosmic Thug Records. Produced by Adam Landry and featuring guitar work from Brett Rosenberg, the live recording reasserts Pujol’s status as one of the smartest, most versatile artists in town, and feels especially necessary amidst the current political climate. Hear both sides below!

In celebration of “Political Errors @TheEndOfThe20thCentury”‘s release, Pujol will be reading both sides as well as playing new songs this Monday, Aug. 21 at Cold Lunch Recordings’ Black Out eclipse party at The Pavilion East. You can find tickets and more info right here!