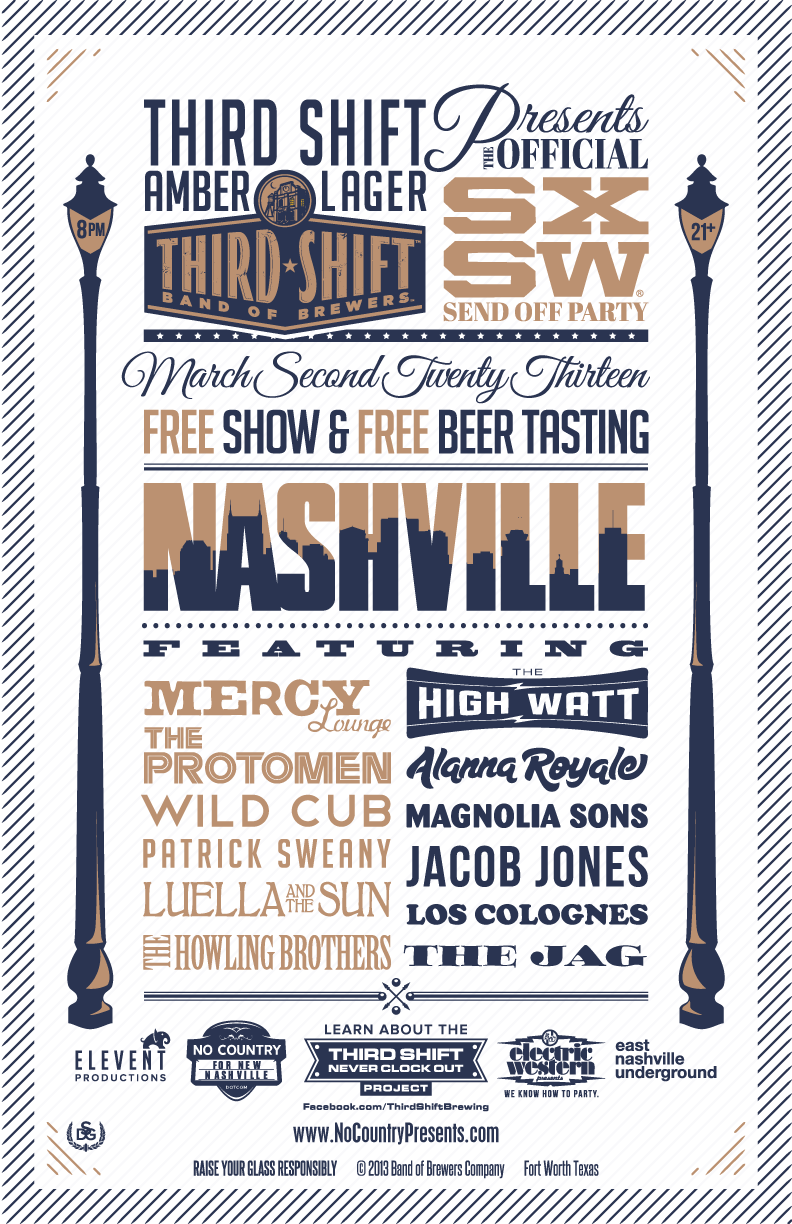 Third Shift Amber Lager has teamed up with No Country and some of our pals Electric Western Records, Elevent Productions, and East Nashville Underground for a one-night, two-stage, ten-band bill celebrating the diversity of Nashville’s independent music scene, and to send-off the bands that have been selected to represent Music City in Austin at South By Southwest 2013.  And, what is better than that?  The fine folks at Third Shift will be providing some FREE BEER, so you can try out the new Third Shift Amber Lager, which was created with much of the same passion that is sending these artists to Austin next month.

The lineup on the Mercy Lounge Stage includes confirmed SXSW artists: The Protomen, Wild Cub, Patrick Sweany, Luella & The Sun, and The Howlin’ Brothers. The lineup on the High Watt Stage includes sure future SXSW representatives from Nashville, including: Alanna Royale, Magnolia Sons, Jacob Jones, Los Colognes, and The JAG.  We even have special guest Lt. Dan Buckley of Lightning 100 MC’ing the Mercy Stage.

Third Shift Amber Lager will be providing a limited number of complimentary Third Shift beer for everyone in attendance.  There will also be an interactive twitter board and a free photobooth by Generation Domination.  Essentially, for those of you not sojourning to Austin in March, this is your SXSW party, and it is absolutely free.  This is just the announcement, so check back in the coming weeks as we spotlight each of the artists performing!

This party is 21 and over. The show starts at 8pm, and admission is on a first come, first served basis.  So, get there early, have fun, raise your glass responsibly, and support Nashville’s local music scene! You can find more information at mercylounge.com and you can help us spread the word by inviting your friends on Facebook!

Cherub to Guest DJ at First Live On The Green Afterparty!