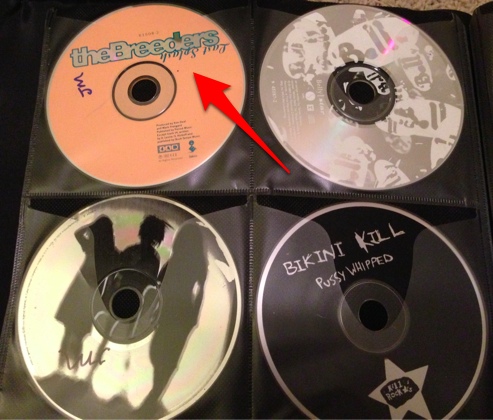 STFU, Tom Shane. No one wants to hear you hawk diamonds. It’s almost Valentine’s Day and we’re tired of the constant assault that we’ve been under since before Christmas.

Anyone out there that really loves their lady (and hates perfunctory holiday obli-gifts like diamonds and those awful chalk hearts that now shout at you in tween-text-abbreviate and make you feel like the Rock Biter from The NeverEnding Story) oughta’ surprise their sweetheart with tickets to The Breeders’ Last Splash 20th anniversary show that was just announced for Mercy Lounge on May 14.

On April 23, 4AD will release LSXX, a deluxe anniversary edition of The Breeders’ landmark record that helped pave the way for women in rock in the pre-Lilith fair 90s, completely captivated a generation of young women looking for role models that didn’t suck, and spawned one of alt-rocks most iconic videos. Click below to be transported to a more alternative time…

The reunion tour will feature the original line-up that recorded Last Splash: Kim & Kelley Deal, Jim MacPherson, Josephine Wiggs (with special guest, Carrie Bradley) and promises the record will be played live in its entirety.

Tickets go on sale this Friday at 10am (here) with plenty of time to purchase in advance of everyone’s favorite Hallmark holiday – plus it’s only $20, so you can show the one you love that you respect her indie rock roots without breaking the bank.

I’ll be there along with grrrl friends from across the state that are totally psyched for this one and probably rummaging through their old CD collections in collective nostalgia like I did. That’s how I found that ridiculous (read: amazing) photo of a page from my 500 CD book from high school. See that there – that’s Last Splash, on a page with other bands that start with B (lotsa’ B words that aren’t the “B-word” – don’t worry, 7 Year Bitch is in the section for bands that start with numbers in their names – because I hadn’t yet evolved to autobiographical sorting because I hadn’t yet lived much life!) Yep, that’s Bikini Kill, Belly, and Babes In Toyland living there next to The Breeders and yes, I did put my initials on my CDs because my sister used to steal them, OK?! How else are you supposed to settle the arguement over who’s copy of Dummy that is? And it totally worked, until she figured out she could remove Sharpie with one swipe of a nail polish remover covered cotton ball.

Now that I’m (mostly) grown-up, I’m insanely grateful for the gift The Breeders gave to me in my rebellious youth and I cannot wait to re-visit my favorite of their efforts. I’ll trade anyone with tickets to this show one lovely Star Wars Valentine – or, in honor of this 90s revisit, a mix tape made with love.